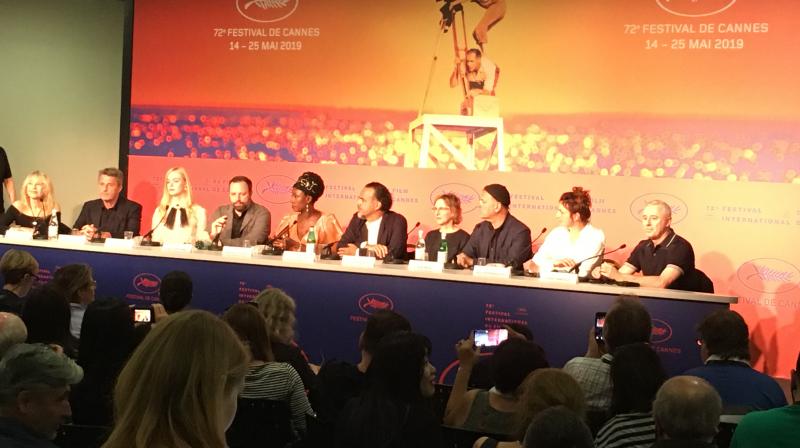 Opening films carry a heavy burden. And for any festival it’s a tough call what to make its lead — the most starry film, or what it deems among the best, thus taking a chance to underwhelm the audience for the rest of the festival.

Opening films at Cannes — described as a film festival which celebrates the best of “arthouse cinema with a wide audience appeal” — are particularly high-profile but also jinxed and have often been subjected to long and loud booing. Last year’s opening film, Everybody Knows, by two-time Oscar winning director Asghar Farhadi and starring the gorgeous couple Penelope Cruz and Javier Bardem, was immensely disappointing despite impressive performances.

It didn’t get booed though, perhaps because it was all too dull and bland.

On Tuesday, when the end credits of The Dead Don’t Die rolled, there was some stray, weak clapping — perhaps for the performances of Bill Murray, Adam Driver and Tilda Swinton. But nothing that matched the build-up to the film, including the walk down the red carpet of its cast and crew and the opening ceremony dedicating itself to welcoming the return of Jarmusch to Promenade de la Croisette — the road in Cannes where the Palais des Festival stands.

Jarmusch’s film, a wry, languid, comical take on the zombie genre, tries to set itself up as some sort of political commentator on life in post-Trump America. It throws in some items that draw a smile, including a red baseball cap which says “Make America White Again”, and mentions the lovely land and people of Mexico, but the film’s commitment to either politics or to the rising dead is all too feeble.

The film’s plot, on the other hand, is simple. In peaceful Centreville, a town of 738 residents, pets are disappearing, the sun won’t set, and the local news channel is talking of polar fracking and earth’s rotation on its axis going awry.

The town’s three cops, Cliff (Bill Murray), Ronnie (Adam Driver) and Mindy (Chloe Sevigny),  listen repeatedly to the movie’s theme song, by Sturgill Simpson, and say the same two things over and over — “Something strange is going on,” and “This is not going to end well”.

The apocalyptic attack, that is digging its way out of the local cemetery, is slowly but steadily making its way to the few places where the living dwell — a farm, a detention centre, a motel, a diner, a gas station — while the three cops pretty much stand there watching, mildly stunned at being stalked by slow-moving undead despite being armed with guns and instructions to kill the head — decapitate the undead with farm scissors or just blow their heads off.

The film, all to keen to pose as an intellectual and not to be mistaken for a zombie film, uses all the  tropes of the B-grade genre over and over, but also keeps reminding us that we are watching is a film which has a theme song, a script and actors playing characters.

The film’s most abiding commitment is to remain deadpan, which might have worked had the dead not been rising to chomp on the innards of the living.

The Dead Don’t Die makes several fun references to classic movies, including Star Wars, Psycho, Harry Potter, Lord of the Rings. And here the dead rise not just to eat the living but also gravitate towards the activities they were addicted to while living. So mobile phones, chardonnay, Xanax… A slap on the wrist to the consumerists that the living have become.

But the film’s jokes are either too tedious to take off, or they become stiff and dead all to soon, given that the film gnaws at them with the appetite and focus of a zombie, sucking the fun out of it.

At the Cannes film festival, it’s part of the jury’s duty to meet the press and field questions. But given the beautifully balanced — gender, race and ethnicity-wise — nine-member jury that’s going to watch the 21 films in the festival’s main section, called Competition, and give away the Palme d’Or, the Grand Prix and six other awards, sparks were not likely to fly. There was too much awe in the packed press conference room when Alejandro Gonzalez Inarritu, the first Latin-American to head the jury, arrived with other worthies.

On his extreme right sat Polish filmmaker Pawel Pawlikowski, whose Ida won the Oscar for the best foreign film in 2014. Inarritu himself has taken three Oscars for Birdman, and one for The Revenant.

Also on his right was four-time Academy nominated filmmaker Yorgos Lanthimos whose The Favourite won seven Bafta awards earlier this year and got Olivia Coleman her first Oscar for best actress.

There was also Italian writer-director Alice Rohrwacher who had won the Grand Prix for The Wonders in 2014 at Cannes, and French filmmaker Robin Campillo whose 120 BPM wowed Cannes in 2017 and took the Grand Prix.

Then there was the critically-acclaimed writer-director of independent cinema from the US, Kelly Reichardt, graphic novelist and filmmaker Enki Bilal, actress Maimouna N’Diaye from Burkina Faso, and the giggly American actress Elle Fanning, referred to as the jury’s “teen spirit” because she had starred in Inarritu’s Babel in 2006 when she was eight years old.

Apart from Inarritu talking about the significance of films in a world where governments are increasingly writing fiction and making people believe in it, it was the dullest press conference I have been to in years.

Most questions were for Inarritu, and when a few other jury members spoke, they either said very little or kept parroting the festival’s line about gender equality in the films and the jury.

Everyone was honoured and excited to be on the jury and was looking forward to the watching movies.

Given the jetlag that most journalists in the room were fighting, that one hour could have happily been spent in snooze mode.

Our very own Oscar pride, music director, composer, singer A.R. Rahman is in Cannes to announce and publicise his daring new venture — a virtual reality (VR) film titled, Scent of a Song, or Le Musk. He has co-written the film, directed it, and of course composed its music.

The film, which Rahman said has overshot its budget by 30 per cent, is a murder mystery set around a Romeo-Juliet romance. It stars Nora Arnezeder, Guy Burnet, Munirih Grace and Mariam Zohrabyan and has been shot in Rome.

After talk that involved geeky jargon about 8k quality video and Jaunt One cameras, Rahman asked the audience to sample the “immersive experience”. A queue formed quickly outside a small room where three red-velvet pods swivelled.

It was my first brush with virtual reality, which requires sinking into a single-seater pod wearing heavy glasses and headset and then, slowly, revolving.

The characters stared right at me and spoke directly to me, fostering a kind of intimacy that I wasn’t ready for. The experience was immersive, yes, but also rather troubling and addictive.

As a format, virtual reality is designed to pay attention to the viewer, offering a rather a personalised experience. And despite the obvious fakeness of the characters — characters had doll-like plastic smoothness to their faces and feather-light movements — VR clearly lends themselves beautifully to pornographic experience in the way characters approach, talk and insist on intimacy.

But Le Musk is clean, kosher, and its American and European release is scheduled for later this year. Its scheduled to release in India by the yearend.

The film, which is about 70 minutes long, smells. Rahmen said it has six different scents, including one of his favourite — sandalwood. It’s been 24 hours, and I can still feel the sandalwood it in my nostrils.