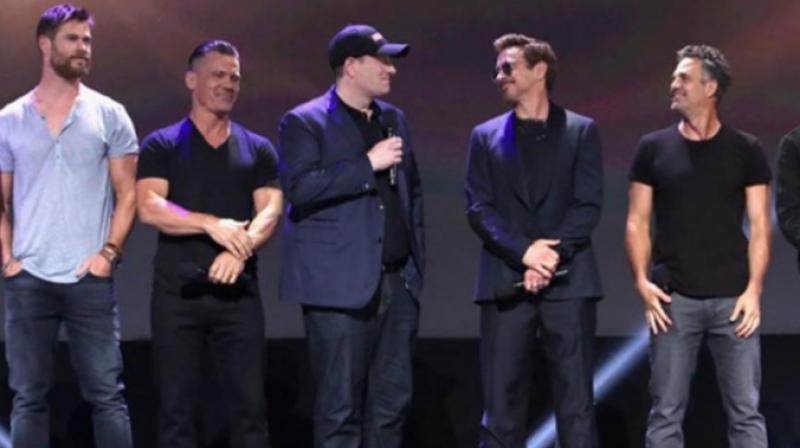 Los Angeles: Marvel brought thousands of fans to their feet on Saturday as it assembled a stellar panel of superheroes to preview 'Avengers: Infinity War' at Disney's D23 convention.

The movie, which comes out next year, unites the characters from all 16 films of the Marvel Cinematic Universe -- and most of the actors who play them took the stage at the star-studded fan event in Anaheim, southern California.

"I've got to admit, these guys have not been together on stage for a long time, and even I find myself geeking out," said Marvel Studios chief Kevin Feige before introducing world-first 'Infinity Wars' teaser footage.

The movie opens in May 2018 -- the 10th anniversary of the US release of the original Marvel Cinematic Universe movie, 'Iron Man.'

"It's funny to think Kevin and I figured all of this out at Randy's Donuts shooting 'Iron Man 2,'" quipped Downey, who plays the titular superhero.

The panel was part of a presentation of the next two years of live-action movies from Disney, which owns Marvel and Lucasfilm.

Lucasfilm's 'Star Wars' panel has become one of the most talked-about panels at the biennial D23.

But here were no new announcements or footage this time around.

The 2018 Han Solo spin-off movie, which fired directors Phil Lord and Christopher Miller in favor of Oscar-winning Ron Howard last month, was largely glossed over, with no cast appearances or footage.

But Rian Johnson, who directed the forthcoming eighth installment of the main series, 'The Last Jedi,' delighted fans by introducing much of the cast, including Mark Hamill, Daisy Ridley, John Boyega and Gwendoline Christie.

Johnson introduced a behind-the-scenes featurette and interviewed the cast on their experiences filming in Pinewood Studios, near London, and on Ireland's west coast.

"When I read the script there were so many unexpected elements, which is great in a 'Star Wars' film," said Hamill, who came on last to a rapt standing ovation.

"It's getting harder and harder to bring new things to the table and this is a real game changer."

Another highlight was a section offering news and footage from the studio's upcoming animation to live-action slate, including remakes of 'The Lion King,' Mulan,' 'Aladdin' and 'Dumbo.'

The crowd was on its feet again after seeing a stunning first clip from 'The Lion King,' climaxing in the iconic moment when Rafiki introduces newborn Simba to the animals of the savannah.

"This is a story that belongs to everyone who grew up with the original film," said Jon Favreau, who directed the movie, due to hit theaters in July 2019.

"I wanted to demonstrate that we could be respectful of the source material while bringing it to life using new techniques and technologies."

Disney announced newcomer Mena Massoud in the titular role for Guy Ritchie's 'Aladdin,' which reboots the 1992 animated classic, and Will Smith as the genie.

Disney also revealed that production is underway for the live-action reimagining of its 1941 animated classic 'Dumbo,' slated for release in March 2019.

The movie is being directed by Tim Burton ('Alice in Wonderland,' 'Charlie and the Chocolate Factory') and stars Colin Farrell, Michael Keaton, Danny DeVito, Eva Green.

Burton, who is starting production in England, addressed the D23 crowd via a video clip in which he described "Dumbo" as "one of my favorite of the Disney movies."

British actress Emily Blunt talked about playing the practically-perfect nanny in 'Mary Poppins Returns,' a sequel to the iconic 1964 original that hits theaters on December 25 next year.

"I needed to try to pay homage to Julie Andrews but carve out a new space for myself. And we were very loyal to the books," said Blunt.