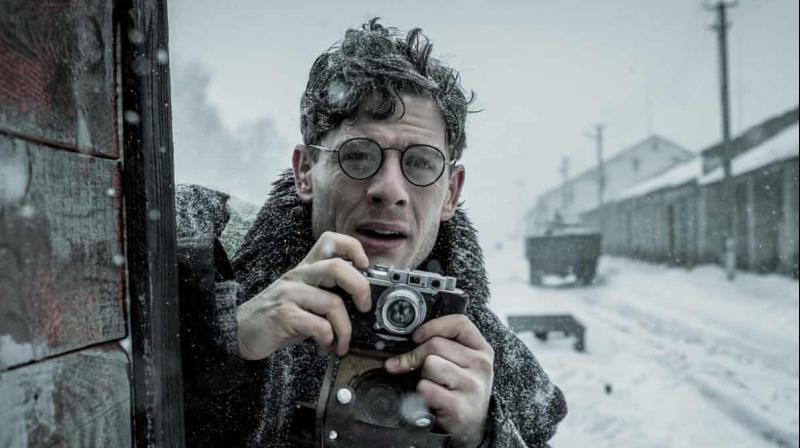 A scene from Mr Jones, Agnieszka Holland's film about truth and propaganda.

New Delhi: Indeed, history is written by the victor but its first inconvenient draft is written by journalists, men and women often labelled as liars, insane and anti-national by authoritarian regimes and their toadies. Despite that, you won’t find them screaming on TV screens. You’ll find them repeating the truth, calmly, with facts.

The film is set in 1993, during what has since come to be known as the Holodomor (to kill by starvation), or the Famine-Genocide in Ukraine.

Jones arrives in a Moscow that is simultaneously welcoming and hostile. He’s chasing a suspicion. Russia’s claim of a successful revolution, of happy factories and prospering farms, doesn’t feel right because the numbers don’t add up.

Duranty dismisses it as a conspiracy theory.

Mr Jones is gorgeous to behold and is made with impressive technical prowess. Its scenes are shot and edited beautifully, often adding tension and energy. But the Communist Moscow that it creates is the sort we often see in Hollywood films — shadowy men lurking in dark corners, and Russians speaking English in an accent we have come to identify with duplicity and evil since the first James Bond film.

All the warmth in Holland’s film comes from her respect for Jones and the art director’s love for Russian interiors — large, plush rooms with red walls, gorgeous carpets and lamps. But the Russians drink too much and they eat all the time. Except in Ukraine, where Jones’ story takes him.

A thick, gruesome coat of snow covers Ukraine, as if trying to hide how Stalin's policies were leading to the starvation and death of six million people.

We stand next to Jones as he travels through ghost villages, walks into a house where dead bodies lie next to wood sliced into bite-size pieces. He watches all the grain being taken to Moscow and listens to kids sing of hunger and eating their dead. We are ready to throw up when a tiny piece of protein is offered to him.

In between, George Orwell and his Animal Farm make brief appearances.

But central in all this is Jones, the first journalist to report about the famine and deaths, and his very public clash with Duranty, who NYT then called “our man in Moscow” though he was Stalin’s own Goebbels.

James Norton is a big, gorgeous man with the air of upper class elegance and decency. He brings good boy-piety to the character of the earnest Mr Jones, but carefully saves it from descending into self-righteousness.

Jones returns to England to tell the story of famine and deaths, and a government determined to hide it. Duranty immediately debunks it in NYT, painting the famine with government propaganda. He calls it “widespread mortality from diseases due to malnutrition”.

Holland’s Mr Jones carries an urgent message: Two people may tell the same story differently. But there is only, always, one truth.

You'll know you've spotted it when authoritarian regimes, their cohorts and apologists scream, "It's not true".