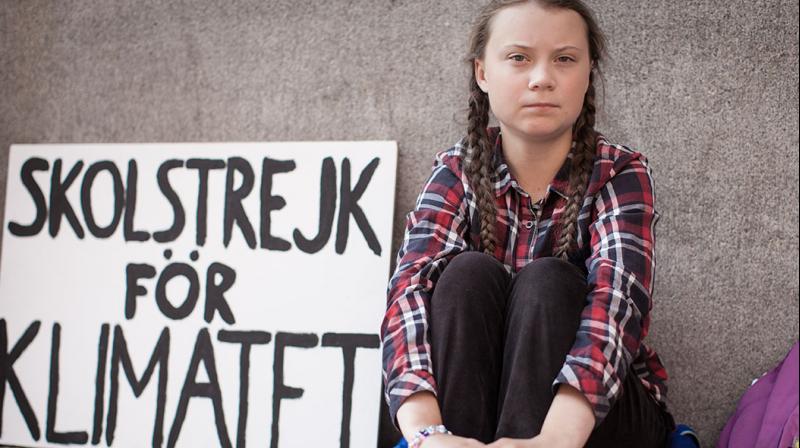 New Delhi: Greta Thunberg is 16 years old and many world leaders can’t stand her. But young people, especially school-college kids, environment activists and tree-huggers, those getting ready to inherit the earth, love her. For them she’s a beacon of hope.

For the “serious” lot though, she’s a spotlight they can use, temporarily, to shine light on “their concerns, their research, their solutions”. They have little to say about her simple messages — “cut emissions, align with the Paris Agreement”, so they don’t engage with her much. They are people of science, and science is complicated. But they give her a stage, applaud her when she admonishes heads of state, legislators, UN chiefs for not doing enough. They smile, give her a thumbs-up sign and take selfies with her because their kids love her. But the “serious people”, they don’t take Greta seriously.

Director Nathan Grossman’s documentary, I Am Greta, which is playing at TIFF, loves Greta, the girl and the activist. It’s also protective of her. It’s difficult not to be when a school girl in leopard-print tights and a pink backpack is called “mentally ill” and a “turd” on international news channels. When presidents and prime ministers use their offices to attack her and, through her, “the science”.

Jair Bolsonaro has called her a “brat”, Donald Trump said, “Chill Greta, Chill!” and asked her to “work on her anger management problem”. Vladimir Putin said that she is “poorly informed”. Climate change deniers hate her and don’t want to engage with her because, they say, “There is no proof of global warming. It’s all a money making hoax… Greta is being exploited by her parents, is propped up by vested interests.”

But they can’t ignore her. Because the protests against inaction are growing and she is the pivot. So they attack her on Twitter, make fun of her, issue death threats. There have been so many that her worried father has had to take courses in emergency lifesaving procedures.

Grossman’s film opens in the Atlantic Ocean. Greta and her father are on a racing yacht. It’s August 2019, and she’s on her way to address the UN Climate Action Summit. The trip on the choppy seas, which took 15 days as opposed to 8 hrs and 22 minutes of flying time, led to the now famous, “How dare you?” speech where statistics and solutions were bracketed by Greta’s GIF-friendly fury.

The film then goes back to where it all began, on August 20, 2018, across the street from Sweden’s Parliament.

That summer was particularly lethal. Sweden’s hottest in 262 years. Elections were on, and Greta sat on the footpath till September 9, with her red water bottle and a hand-written placard: “School strike for climate”.

Elderly, concerned ladies stopped to tell her to go back to school because that’s how she’ll make a real difference. Study, become something, and then change the world.

They thought her silly, alarmist, misinformed.

Svante, Greta’s father, is an actor and he too didn’t support her strike earlier. So she made a long list of facts and handed it to him — how adults are destroying the planet and her future by their actions and inaction, and what can be done.
Though he would come often to the footpath, to ask if she had eaten, if she was feeling okay, he wanted her to come back home.

But Greta didn’t budge. And then someone asked her, “May I sit with you?” Few more joined. And a few more. And soon, the climate school strike, Fridays for Future, began to spread.

A year later, in September 2019, between two Fridays — 20-27 — 7.6 million people marched across 1,600 cities in what is considered the biggest climate strike in history. It began on that footpath in Sweden, with that girl who has Asperger syndrome.

Wikipedia describes Asperger’s as a “neurodevelopment disorder that can lead to difficulties in social interaction along with restricted and repetitive patterns of behaviour and interests”.

Greta has a photographic memory, and when she gets interested in something, she has “laser focus and can keep at it for hours, without getting bored”.
But she doesn’t like small talk, and she can’t socialise.

She’s often quiet. Sometimes it’s nothing. But sometimes, when she sees a forest ravaged for “economic growth”, people dying in floods and hurricanes, animals starving, she feels it in her bones — the planet being destroyed. That depresses her a lot. And once, some years ago, she even stopped eating, speaking. But then she realised — this isn’t going to help.

Greta began at home first. An electric car. No plane travel. Wooden toothbrushes. Pulling plugs out of sockets. Vegan diet. Her mother, Malena Ernman, an opera singer, even having to give up her career because she couldn’t drive around Europe all the time.

I Am Greta travels with her to the EU Parliament, to UN Climate Change conferences, to grand palaces and presidential houses. But it also gives us glimpses of her life in between attending climate strikes and scolding world leaders.

It goes with her to meet the Pope, where her father can’t stop grinning. It listens to what Emmanuel Macron is saying to her and then stands by to watch when, after their brief official conversation, he asks if she likes reading.

Mostly, Greta doesn’t like grown-ups much because they “say one thing and do something completely different”. Even at meetings where they applaud her short speeches, they do nothing.

“It feels like everyone is in a role playing game… it’s all just pretend… feels fake… Why am I even invited?” she asks.

What worries her most, thought, is that these meetings “make people think that we are making progress”.

But I Am Greta is not in activist mode. It doesn’t give us proof of global warming, nor does it tell us how emissions are not really reducing. It simply challenges the rightwing’s concerted attempts to dehumanise this incredible school kid by introducing us to Greta Thunberg, the girl in pigtails who writes her speeches herself, agonises over an awkward sentence, who cries on the choppy sea because she is missing home, her dogs. It watches her dancing alone on a train sometimes.