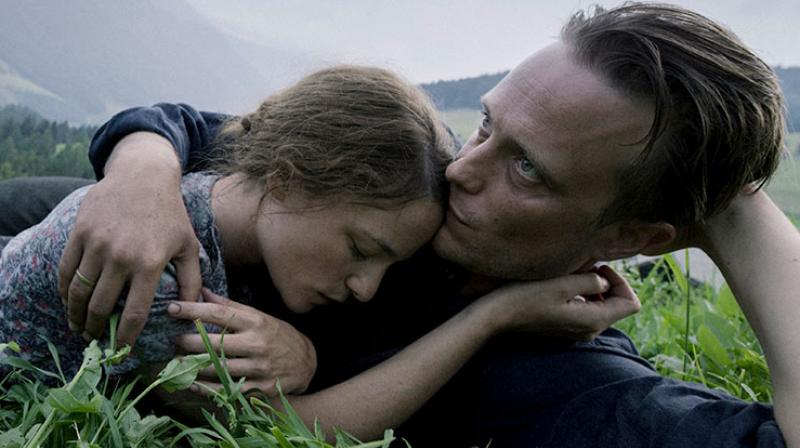 Terrence Malick's A Hidden Life stars Bruno Ganz, the Swiss actor who portrayed Adolf Hitler in Downfall (2004). Ganz passed away in February this year and in his last role here he plays the judge hearing Franz’s case.

Cannes: On Cannes’ main boulevard, the Croisette, more than 7,000 kms away from Lutyens' Delhi where Prime Minister Narendra Modi lives but has designated other residents of the area as being against him and thus, anti-national, the few Indians lining up to watch films on Sunday evening were also, simultaneously, glued to their phones.

All stared at their screens, either smiling or retching, depending on which side of the divide they stood.

Exit polls often get it wrong, yet they have managed to inspire Sensex and depress those whose faith in India being a secular republic has been under constant challenge since 2014.

Exactly at that point, as the forecast was sinking in, Terence Malick’s A Hidden Life had its world premiere at Festival de Cannes, as if in response to those losing hope and wondering if the India they grew up in was now truly dead.

Usually, it’s not easy getting into a Terrence Malick film. If not right at the beginning, like he did in The Tree of Life (2011), his film will pause for his camera and background score to wax lyrical — quite literally — and challenge you to stay with him.

In an age when both our tastes and patience have been sharpened and reduced to focus on pacy plots and hyper dialogue-baazi, this can be taxing, fatiguing, annoying even.

My son was 13 when I took him to watch a late night show of The Tree of Life. He fell asleep in 10 minutes, on the floor, while I struggled to stay with the images of the Milky Way. What followed eventually was beautiful, but I wasn’t a fan.

That changed on Sunday night.

Malick’s A Hidden Life opens with real, black and white footage of Hitler indoctrinating and organising Germany as the Third Reich — official Nazi designation for Germany from January 1933 to May 1945, it means "Third Realm" or "Third Empire", the first two being the Holy Roman Empire (800-1806) and the German Empire (1871-1918) — as well as the famous Nuremberg rally in 1938. Everyone is hailing Hitler, the soldiers with the bayonets of their rifles on fire.

And then A Hidden Life announces that it is going to tell us a story based on true events.

That's the story of an Austrian farmer, Franz Jägerstätter (August Diehl), his wife Fani (Valerie Pachner) who live on a small farm in St. Radegund with their three young daughters, Franz’s sister and mother. Franz and Fani work together and are gloriously in love — with each other of course, but also their life, their farm, their family.

Around 1938, after Anschluss (the annexation of Austria into Nazi Germany), Franz is called for military training. He returns home eventually, to Fani who seemed lost without him, but something has changed — both Franz, and the village.

The villagers, including the mayor, are now enthusiastically aligned with Hitler and his agenda, believing that things were bad before him. We see Franz’s unease at this talk, and then we hear him speak of how unjust the war is.

Franz refuses to donate to the war and won’t accept family allowance that is due to him. And in 1943, during World War II, when he is called for active duty, he tells Fani that he just can’t get himself to kill innocent people on behalf of Hitler.

Both Franz and Fani know the consequences of his actions, and so he asks the local priest what one should do “if our leaders are evil…”

“I want to save our lives, but not through lies,” he says.

Franz is willing to serve as a paramedic, but when he is standing in line with other soldiers and refuses to take the Hitler oath, the “conscientious objector” is accused of Wehrkraftzersetzung (undermining military morale), and jailed.

By all measures, Franz’s is a minor act of defiance and he is repeatedly told — by everyone who meets him, with every Nazi blow and humiliation, by his own lawyer and even the letters that Fani writes to him, detailing how the villagers have turned hostile — that what he is doing is meaningless, insignificant, that it will remain “hidden” and amount to nothing apart from satisfying his ego at a great cost to those he loves.

All of which is true. But then the film asks, through a man who is painting a chapel: Those who worship Jesus now as he hangs on the Cross, and believe that if they had been around then they would have stood with him, whatever the consequences, will they actually do so in real, today?

There is little logic in what Franz is doing, but there is his belief in what is wrong, and the instinct that what he’s doing is right. And that, A Hidden Life says, is enough.

A Hidden Life is an anti-war film, of course. But it is more, much more than that.

Its interest is not so much in the power of evil or its complete intolerance for even the slightest dissent as much as in the test that evil poses to individuals and a nation -- a test of moral clarity, resolve to do what is right, resilience, and faith in the values it espouses.

A Hidden Life is based mostly on In Solitary Witness: The Life and Death of Franz Jägerstätter, written by Gordon Zahn in 1964. The book details a much more defiant and religious Franz than the film shows, even recording how every time Franz was greeted by the usual “Heil Hitler!”, he would respond with “Pfui Hitler!”

Pfui is an exclamation of disgust, contempt, annoyance.

The “conscientious objector” was eventually put to death in August 1943, at the age of 36, and in 2007, the Pope declared him a martyr.

Apart from its powerful message, A Hidden Life is transcendental in its cinematic aesthetics, beauty, operatic camera work.

For the first two hours especially, when the film is in Franz’s village, the camera is constantly moving, framing every character, scene from below, with a piece of the sky, the mountains, the meadow as the grand, eternal backdrop. Even when capturing Franz and Fani in close up, the camera is never stationary.

The film shows the beauty of the countryside, but also the hardship and the exhausting, unrelenting physical labour of life in a farm. Fani is working, constantly — cutting, digging, chopping, collecting...

There will be criticism of the length of A Hidden Life — 2 hours and 53 minutes — and yes, there are bits that could have been shed. But consider this: Take a photograph you like, one that has something as its focus, but also a lively background, maybe people on a street doing their thing, the sky a certain shade of blue or red, clouds in a special formation, someone walking past, gesturing...

If someone were to keep just the main image, and cut out the rest, it would still be a photograph, but it would not be a relic of the original, without the context or the beauty it once had.

If even a minute of Malick's A Hidden Life were cut, a piece of its lyrical beauty would be lost, and it would be just another film about an insignificant man standing in defiance against an evil empire.

It would not be the Terrence Malick film that keeps us floating in Franz and Fani’s world long after the end credits have rolled. And it would definitely not be the strongest contender for Palme d’Or, 2019.