British director Kapadia’s third and last instalment in a trilogy about child prodigies who struggled with fame. 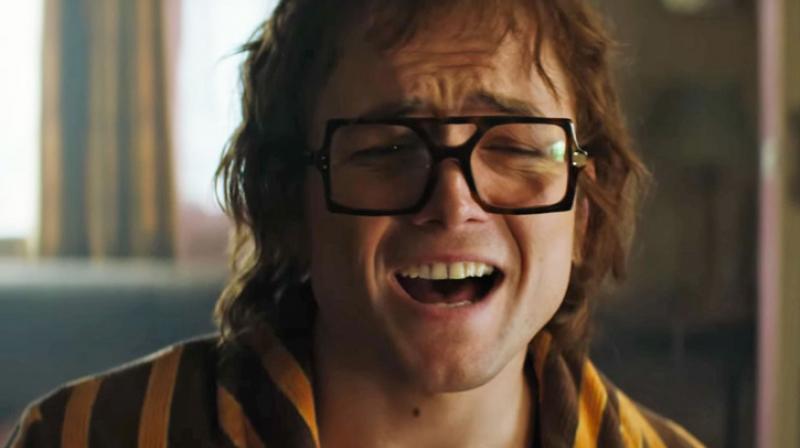 A still from Rocketman.

Cannes: A short man dressed as a very orange, very blingy and upright phoenix, with red-black feathers bracketing his entire torso and closing above the antelope horns on his head, strides into a room like an anxious tantrum looking for a large space and an audience to do its thing.

Men and women are sitting in a sombre circle, waiting to tell tales of how they hit rock bottom and finally got to this Alcoholics Anonymous meeting.

The orange, rhinestone-encrusted phoenix-man in lycra drops a few feathers while announcing, with affecting informality, that he is addicted to more than just alcohol. There’s also drugs, sex, shopping, bulimia… And he is gay.

But above all, he says over the course of the confessional, it is Reginald Kenneth Dwight’s desperate need for love, a hug from his cold father, and his casually callous mother’s words — that he will never know true love — that haunt him and drive him crazy even now, despite being one of the best-selling artists in the world who now goes by the name, Elton John.

On July 5, 1984, a small car drives through Naples, Italy, to the Stadio San Paolo where 85,000 fans are screaming while waiting to welcome their saviour, Diego Armando Maradona, then 24 years old, barely five feet-five inches, and bought from Barcelona for a world-record fee.

The press conference that follows is both ecstatic and tense, with fans chanting “Maradona” while the chairman of Napoli club, Corrado Ferlaino, screams at and tries to eject a reporter for suggesting that the club has links with the Camorra, Naples’ Mafia-type crime syndicate.

Local newspapers and TV commentators say that despite the lack of "houses, schools, buses, employment and sanitation” in penniless, impoverished Naples, people didn’t care about the money splurged because Maradona was their “saviour”.

Over the next seven years, Maradona will take Napoli, the team from the south of Italy that had never won a single league title, to its most successful era ever, beating bigger teams from the north — A.C. Milan, Juventus, Inter Milan, Roma, among others.

In most homes in Naples, Maradona’s portrait would hang next to Jesus, his murals painted on the city’s ancient buildings, and his many transgressions ignored — cocaine, affairs, an illegitimate son he refused to accept — as long as Napoli won. That dream run continued till the 1990 Fifa World Cup hosted by Italy.

Director Dexter Fletcher’s Rocketman, a musical and a biopic, that tells the story of Elton John’s breakout years, and Asif Kapadia’s documentary, Diego Maradona, which sifts through 500 hours of video footage from Maradona’s personal archive, to tell the story of the rise and fall of the football legend, played in out-of-competition sections at Festival de Cannes.

Both films tell the stories of two living legends, and the cautionary tale coiled around their pain and glory.

In Rocketman, which presents the piano prodigy as a troubled, self-made musical genius, Taron Egerton plays John, and has sung all the songs.

The film focuses on both — Elton John’s extravagant lifestyle, costumes, theatrical but stunning and flawless on-stage performances, but also the real, slightly pathetic man-child who dwells inside all the shiny, psychedelic, outrageous personas he creates, craving love, acceptance.

The film has exhilarating, infectious energy and like all musicals breaks into a song during a scene and uses that to move the plot further. This gives the film a dream-like quality and it never really gets grounded as a tell-all, which is good as Rocketman takes liberties with the sequence of events and songs.

Rocketman’s love for Elton John is abiding, and Taron Egerton does a great impersonation of Elton John on stage and off it as the film chronicles the musician’s off-and-on collaboration with songwriter Bernie Taupin, his troubled relationship with manager and lover John Reid, his marriage to close friend and sound engineer, Renate Blauel, all the while focusing on how mean and horrible his parents and lovers were. The film’s insistence on repeatedly showing us John John’s binge drinking, attempts to hide his insecurities and bloated eyes behind large, silly dark glasses, often behaving badly himself, often makes pop psychology the film’s centrepiece, taking away the humanity of the man and the musician.

It follows Senna, his documentary on the race car driver who died at the age of 34 in a crash, and Oscar-winning Amy, about singer-songwriter Amy Winehouse and her tragic death at 27.

Like the first two documentaries, this one also stalks and celebrates its subject.

We don’t see Maradona, but hear him in voiceover, talking of how football is a game of deceit.

We hear commentators talk of him as a football player who never had the physical advantage, and so it became, for him, a game of the mind and, at least in one epic moment, sleight of hand (the infamous “hand of God” goal at the 1986 World Cup in Mexico).

The film traces his birth, as the son born to loving parents after four daughters in Buenos Aeris’ slums Villa Fiorito, who took care of his family since the age of 15, but its main focus is on Maradona in Naples — that once hung a poster outside a cemetery after Maradona brought victory against the north giants, declaring “They don’t know what they missed” — suggesting a split, a two personality disorder, in a sense.

There’s Diego, the football god, legend, the best footballer in the world with the best goal ever to his credit, and then there’s the persona of Maradona (the footballer refers to himself as Maradona, in third person) who was addicted to cocaine, had links with the Mafia, and loved flaunting accessories of the rich, from cars and fur coats to women.

The film shows us Argentina’s win against England at the time of the Faulkland War in 1986 World Cup, and how things changed with the 1990 Fifa World Cup, when Argentina beat Italy in the semifinals in Naples, and the city and the country turned against him.

The backlash was quick and nasty. The god was now the devil and he was hated as much as he was loved once.

There were inquiries into his drug habits, wire-taps that revealed gory details of his sex life with prostitutes, and he tested positive for drugs that led to a ban. Eventually, the man who arrived in Naples to the city turning us to catch his glimpse, left in disgrace, all alone.

In Kapadia’s Diego Maradona, we see the man of anger, nerves, endless energy, spirit, unbelievable talent and guile on the field.

But Diego Maradona’s reliance almost entirely on archival footage keeps the film so focused on the years in Naples, that we get little else. We barely meet the charming, charismatic man Maradona was, and the player with unbelievable, sexy swag on field is reduced to a few goals. There’s little of the many controversies he has courted, his outrageous statements, fights, and what he became and is today — the footballer who weighed 67 kgs at his peak, at one point became a 130 kg sad, unrecognisable relic of himself.

Maradona’s life story is richer and crazier, scarier than what Diego Maradona shows.