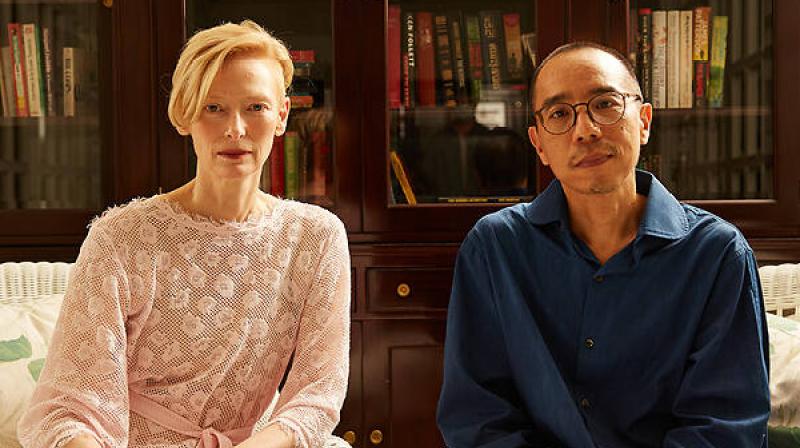 She is an iconoclastic actor who is in a league of her own.

Tilda Swinton is British and is known for her roles in international cinema, both independent and blockbusters.

She has received top accolades, including an Academy Award, the British Academy Film Award and nominations for three Golden Globe Awards.

The New York Times ranked her thirteenth on its list of the greatest actors of the 21st century. Her films have been regularly screened at various editions of the prestigious Cannes Festival, including this year’s.

After graduating in English literature from Cambridge, Tilda joined the Royal Shakespeare Company and acted in many of their productions. She also did Bertolt Brecht plays.

Tilda’s foray into cinema began when she met the independent director Derek Jarman and acted in many of his experimental, often bizarre, movies. He turned out to be one of the biggest influences in her life.

Since then, Tilda has acted with iconoclastic directors from around the world — Jim Jarmusch, Wes Anderson, Bela Tarr, Sally Potter and Eric Zonca. She also did mega Hollywood films — The Beach, Vanilla Sky, Chronicles of Narnia and The Avengers.

Tilda did movies with individualistic Asian directors, too — Snow Piercers, Okja with Bong Joon Ho from Korea, and last year, she acted in Memoria, directed by Thailand’s best-known indie director, Apichatpong Weerasethakul. The film was unique because it was shot in Colombia, boasted of an international cast from Europe, United States and Colombia, and had a Spanish/English script. The movie won a Special Jury Award at the Cannes Festival.

Memoria was recently released in Bangkok, and Tilda Swinton flew down to the Thai capital for its premiere. She also conducted a Master Class, where, true to her personality, she was wild, witty, charismatic and controversial.

On coming to Thailand:

What a luxury it is to “quarantine” in the wonderful beach-town of Phuket, after the cold in Europe!

On her acting career:

I have never been interested in acting, an acting career, or the acting industry. The idea of being in an industry is anathema to me, and I am glad I escaped it. I know actors take their craft very seriously, but I am ignorant of it. I have not been interested in a career, but in a life. An artiste’s life — that is different from being an actor! I am a writer who stopped writing! My inner wiring is that of a writer.

When I was at university, I was extremely interested in theatre. They taught me the art of using different voices.

I was ready to give up acting when I met Derek Jarman. It was he who set the course of my life in cinema. We were a family, holding Super 8 cameras! Super 8 was one of the glorious inventions of cinema. It was like collating poetry! It made an artist of you, because you could create, improvise and collaborate. I did many exciting films with him.

On collaborating with independent directors:

Every one of them tried to do something different, every role was highly interpretative. That is why I enjoyed them all. The theme of de-aging in David Finch’s Benjamin Button was fascinating. As for Sally Potter’s Orlando, I have been working with gender for a long time, and the film was at the core of my being (in the film, Orlando is a man who changes into a woman!). I learnt Russian and Italian for Luca Guadagnino’s I am Love. I totally enjoyed Korean director Bong Joon Ho’s highly individual films Snowpiercer and Okja.

On working with big stars and directors:

They may be big names, but I chose the films because the roles were unique — Michael Clayton with George Clooney (she won an Oscar for it), The Beach with Leonardo Di Caprio and The Avengers with an exciting ensemble cast.

On how she chooses her roles:

It all starts with a conversation with the director. That is the trunk of the whole tree.

Many call it a craft, but I call it an art. It is like “performing” without your skin. But “learning” acting can be a red herring.

On other important aspects of a superior performance:

The voice is especially important for preparing a role. The ‘framing’ in the film, is also important. In fact, the framing is the landscape of the performance. One needs to put them all together. However, it is not just a bag of tricks!

When I had a conversation with him more than a decade back at Cannes, I wanted to dive into his pool. He has a unique sense of space and rhythm.

On the film, Memoria:

There is the misconception that a film needs story, characters, etc. Memoria has none of these. It is sensational, as it deals with the senses. Jessica, who plays the lead, is like a tortoise without a shell. She has a sense of undecidedness which is like the artiste’s predicament, and wafts through the film like in a dance. It is so close to my experience in life!

I have done many films in Hollywood. But the more time I spend in America, the more foreign I feel. Am I European? No, I’m Scottish! That’s why I continue to live there. I love nothing better than seeing the highlands from my window every day. It feeds into my feeling of being in a wilderness, and my sense of solitude which I value.

It brought one closer to one’s friends and family. One of the first things I did when the lockdown happened was read the autobiography of Michael Powell-it was like reading the history of cinema! The pandemic encouraged the trend of streaming films. But it’s a big blip and is not for cine-nuts like us. The big cinema is too robust to fade. It will always be Back to Cinema for me. My personal motto is the one of BFI (British Film Institute) — “Film Forever”.