We peck the minds of Charlie Butcher and The Blowfish about their show Fishing Impossible. 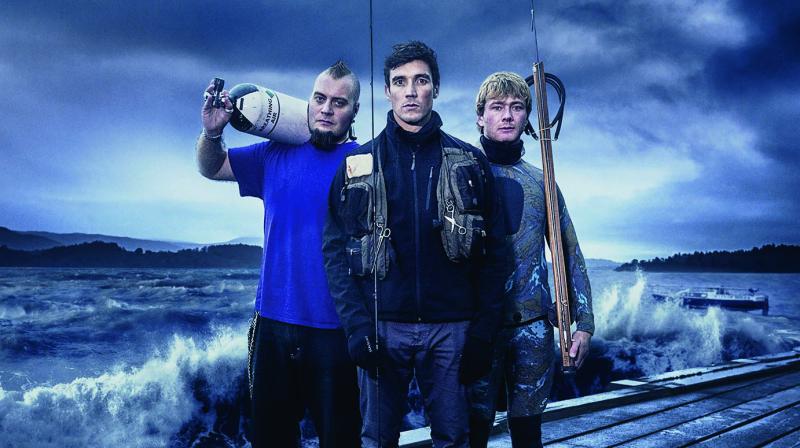 The Blowfish, Charlie Butcher, and Jason.

Fishing Impossible, the popular show on Sony BBC Earth, has three experts — an ex-Royal Marine named Jason, a marine biologist titled The Blowfish, and Charlie Butcher, a gadget-obsessed airline pilot, embark on an ultimate fishing trip across the globe. The show is doused with adrenaline-pumping moments, humour, and good camaraderie between the trio.

We recently had a fun-filled chat with The Blowfish and Charlie Butcher. Like their show, the conversation was also fun, with  the duo constantly taking digs at each other. They answered on questions regarding their scariest experiences, global warming and much more about their wacky journey...

CHARLIE BUTCHER: Genuinely, I have had so many! I am quite experienced in fishing above the water;  when it comes to going underwater, I am the most inexperienced of the three. Once, I was made to free-dive with Jay 100 miles off the Indian Ocean’ shores. When I went down deeper, there were huge underwater currents and my mask got displaced. So, I got out and my eyes were totally red. It was a totally uncomfortable environment to be in. But, I did survive it somehow!

BLOWFISH: There was one time when we were supposed to go into a fearsome sea. The winds were massive. So, when we were about to move away from the dock, Charlie just jumps off the boat and runs away bailing out! But then, Jay and I alone went into the scary sea. We went up and down, that was not a good moment, it was ridiculous! I guess we came pretty close to death more in Season 1 than 2!

What tests your patience more?

BF: The hardest thing for me is not being a natural fisherman like how Jay and Charlie are. So, when we are fishing, and I don’t catch something in ten minutes, I become uninterested. But above all, the one thing that really tests your patience is getting the whole film crew through the airport. We would sit there for hours while the crew sort out all the bags, film kit and everything.

CB: For me, it’s catching fish. It might sound ridiculous but there is something very difficult about catching a fish, when you have a director, a cameraman, a sound man, and someone flying a drone above you. In that environment, fishing actually becomes difficult. The amount of time you’re spending there with all these people expecting you to catch a fish is very trying.

Who is the best fisherman among the two of you?

BF: If it comes to fly-fishing, I can’t do it at all and likewise Charlie is not good under water. So, if you ask me who is the best normal, run-of-the-mill fisherman, I am going to say it is Charlie. But if you ask who is the best fishing man, it is me — 100% (laughs).

CB: He just called me normal and run-of-the-mill (laughs). Yes, I know how to throw a fly and how to fish. But with Blowfish, we have an important weapon — his knowledge about fish. He understands fish. He knows where fish live, he knows where they are going to be spawning, and when they are going to migrate. So, when you’re travelling across the world and dealing with different types of species and environment, you really need to know these things.

Your first-hand experience of global warming and its effect on the diversity?

BF: It was everywhere; In every location we have been to. In Comodo, I was diving through the reefs, which were supposed to be pristine, but they were bleached. In Peru, we had to go 70 miles off-shore for fishing because the water has become hot for the fishes.

It is horrendous. Even the remote parts of the world, you can feel the effects. There hasn’t been a single place that we have visited where the game has not been changed due to global warming.

CB: Filming for the shows has been eye-opening. Not just global warming, things like over-fishing, and man’s influence on the environment can be seen everywhere There are so many issues that humans have created for other creatures. And we are lucky that we can speak for them. It is very sad.