'The Elephant Man' actor was knighted by Queen Elizabeth II last year for services to drama. 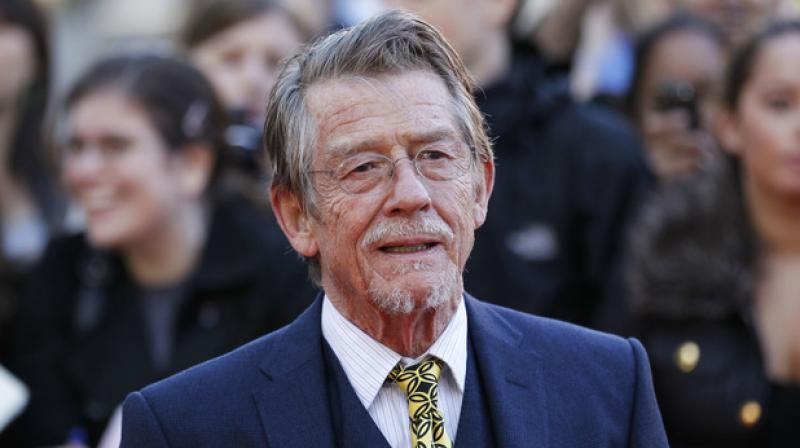 London: British actor John Hurt, who has died aged 77, was a cult actor of many faces, often playing supporting roles which went down in the annals of cinema history. Whether as the first victim in 'Alien', the sensitive monster in the 'Elephant Man' or the transvestite writer in 'The Naked Civil Servant', Hurt slipped seamlessly into any role.

"I'm open to any genre - that is who I am. Essentially I am an actor for hire," he once said.

Knighted by Queen Elizabeth II last year for services to drama, Hurt was born on January 22, 1940 near Chesterfield in the British heartland county of Derbyshire.

His mother, who herself was an amateur actress, forbade him from going to the cinema, which she thought was too common for the son of a pastor.

He discovered theatre at school, but it was towards painting that the great admirer of Edvard Munch first turned, securing a grant to become teacher of drawing at Saint Martin's School of Art in London.

In 1960 his passion for the stage caught up with him and he entered the prestigious Royal Academy of Dramatic Art (RADA) from which he graduated two years later.

In parallel with the stage he also made his debut in television, where he made his mark in Britain portraying transvestite writer Quentin Crisp, and then the Roman emperor Caligula.

"It was the first time on film I'd seen an actor practise the theatrical tradition of taking himself to the part, rather than the other way round - something that remains a lasting influence on my work to this day," he told the Guardian newspaper in 2011.

In 1978 he played Max, an English heroin addict in the hellish Turkish jail in Alan Parker's 'Midnight Express'. He won BAFTA award and the Golden Globe for the best supporting role and was nominated for an Oscar.

The year after the tall and slender actor with a shock of red hair played the second officer Kane in Ridley Scott's 'Alien'.

The scene where the extra-terrestrial kills him when emerging from his chest has gone down in the annals of cinema.

In 1980, after 12 hours of make-up, he slipped into the tragic skin of the 'Elephant Man' for the black and white masterpiece of David Lynch.

His performance won him a second Oscar nomination and a BAFTA for the best actor. He won another BAFTA for his whole career in 2012.

Hurt excelled in cult movies and particularly in futuristic films, like '1984', in which he played Winston Smith in the same year, 'V for Vendetta', by James McTeigue in 2005 and 'Snowpiercer' by Joon-ho Bong in 2013.

But his career of 140 films, of which he admits openly some he accepted to make a living, also led him to portray Garrick Ollivander, a genial magic wand seller in the 'Harry Potter' films, and the mad scientist Oxley in the 'Indiana Jones Kingdom of the Crystal Skull'.

The actor with a melancholy regard who scoured the bars of London's Soho district with Peter O'Toole, Oliver Reed and Lucian Freud, liked playing eccentrics and psychotics, be they victims or torturers.

His deep and grave voice led him to carry out on several occasions the role of narrator, notably in 'Dogville' of Lars Von Trier- with whom he collaborated on three occasions- or in 'Perfume, the Story of a Murderer', the adaptation of the novel of Germany's Patrick Sueskind.

After having fought problems with alcohol, Hurt announced on June 16, 2015 on his blog that he was suffering from pancreatic cancer and said he was "more than optimistic about a satisfactory outcome".

Scarred by the accidental death in 1983 of his fiancee of 16 years, the French model Marie-Lise Volpeliere-Pierrot, Hurt was married four times and had two children.