Is it a mere costume?

Many social media users found the very concept of calling it a uniform very offensive. 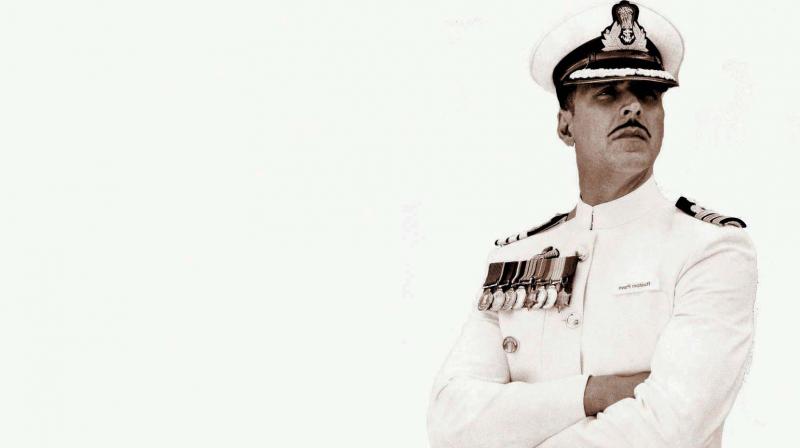 Is the outrage on social media over auctioning a naval uniform costume from Rustom justified? While socialites found the move insensitive, many showbiz personalities supported it

Twinkle Khanna was recently trolled for putting her husband Akshay Kumar’s Naval uniform, worn in the film Rustom, up for auction to raise money for an animal shelter. While many pointed out that it was disrespectful to Army men, others blamed her for being insensitive towards the families who have lost there dear ones, left with the uniform as the last strand of memory.

While the people on social media took sides, people from the fraternity too have started to take their own stand in this case. In all this, it’s noticeable that Akshay Kumar has been helping victims of Army strife as well.

Designer Reynu Taandon, someone for whom outfits and costumes are a matter of creativity and livelihood, feels that it’s a wonderful initiative — to use them for a good cause post the production of a film or a fashion show. “The costume that Akshay Kumar wore for Rustom got him a National Award. It should be a matter of honour and pride that it is being auctioned for the welfare of animals, rather than just lying in the production house’s left-over inventory.”

Shahnaz Husain too stood in support of the cause. She said, “If Akshay was actually serving in the Indian Navy and his uniform was auctioned, it could have been termed insensitive. But, the reality is that he is not in the defence forces. He is an actor and this was his costume in the film. And his wife auctioned his costume to raise money for a good cause.”

Supermodel-turned-actor Sahil Salathia looks up to Twinkle for using the costume for a good cause. “It’s a great initiative. The money raised at the auction will go to an animal shelter. We need to start appreciating good initiatives and not be critical just for fun,” he said.

Actor Shama Sikander, who is best known for her lead role in the TV series Yeh Meri Life Hai, also thinks that it is definitely better to use costumes to help someone. “I understand people have a certain emotional connection with the uniform. And I truly respect their feelings. However, I personally feel that it’s individualistic in nature. For me, material things do not have much of an importance. Rather, it’s the emotions that count. What the Army does, comes from their conscious and their will to do something for the country and that is what we must respect,” shared Shama, who believes that people often miss the point that it’s the act and not the material attached to a person that counts. She added, “I bet even the soldiers who passed away wearing their uniforms would be happy to see their material remains put to better use. Isn’t that what they wanted for their country? To help do something for the people. What he wore shouldn’t matter, what he did should weigh more than anything else,” added  Shama.

Performing art is a world of make-believe that helps reflect and direct the mindset of the population, both in good and bad ways, believes stylist, Rishi Raj. He says, “We need to focus on the term ‘make-believe.’ Actors study the characters they play and add to the authenticity through make-up, hair, mannerisms and costumes. And that’s what one needs to look at: the fact that it is a costume being auctioned off to support another wonderful cause. We truly can’t be living in an age where people don’t understand the difference between the two. It reminds me of the time when people would mob around Arun Govil with aarti thaalis, washing his feet as they believed him to be Lord Rama himself, and not an actor portraying him. There are movies made about all sorts of things. But to imagine that it’s real is a bit absurd. So to all those who feel that it’s disrespectful tow-ards the defence services, I’m sure our soldiers have more things to think about than to worry about a fake costume being auctioned off, especially for a wonderful cause.”

Actor Pia Bajpai looks at the issue as an act for the greater good. “It’s about supporting the humanity after death and only the great souls can do that. If one is willing to auction a costume for an animal shelter or any other good cause, I don’t find anything wrong with it. Also, most costumes worn in a film get dumped in the trash after the shoot because we make so many films in a year and we can’t keep costumes like souvenirs. So, it’s better to put them to use whatever they may be,” shares Bajpai.

Actor Ishita Dutta also feels that it’s a good idea because most of the time nothing much is done with the costumes, other than locking them up in a cupboard or a box. “They can be auctioned for higher purposes. And there are many people who would love to buy these clothes and help out with the cause. So why not? I don’t know if a lot of people do that but it’s a good idea.”

However, there were few who begged to differ. Prem Dewan, retail head, OSL Luxury Collections, said, ‘’I think it’s really insensitive towards the emotions of the families that have lost their kith and kin, as there are other ways to raise money to help animals.”

Saggar Mehra, creative director at Sunil Mehra, also agrees with the idea that materials have emotions attached to them. “Only people who have lost their loved ones can understand the pain. They are feeling bad because they have their emotions attached to the uniform and only they know what it means to them. However, looking at the actor’s viewpoint of auctioning the uniform, which is basically a costume, wasn’t wrong either as she did it for a good cause. Indeed there is a difference between a uniform and a costume and people need to understand it and be practical,” added Mehra.

Many social media users found the very concept of calling it a uniform very offensive. An Instagram user who goes by the name lajjamistry commented on Twinkle’s post, “It’s pitiful how you think you’re in a place to dismiss the hundreds of families who truly resonate with the emotion of earning or seeing a member earn the Indian Forces uniform. All they’re asking for is to not call it a ‘uniform’ auction but a ‘costume’ instead. And yes please do not make that mistake again, the world will have to read one negative comment less?? Your philanthropy doesn’t excuse your disrespect here??”

Another user by the name of obscureshadow, agreed with the fact that it shouldn’t be called addressed as a uniform. The user posted, “If what you’re doing is for a good cause, why don’t you contribute to that cause using the money you have earned. Considering that you are rich enough to do so. Any uniform, be it air force, naval, defence, isn’t just bought. It is earned. Also taking in the account of the number of faults with the uniform, the Kargil star, the bar curl etc. How can you even consider calling it a “Naval Uniform”. Please do re-think about these actions.” (sic)

People who have had family members in the Army were also disappointed with the initiative. yogeshsinghrajput7 posted, “my father has been in service from the last 27 years to earn the badge Akshay kumar wears in the song ‘tere sang yaara’. I am sorry but selling an uniform is an insult. Call it a costume at least for god sake (sic).”

vandana_vinayak posted, “Give this idea to mothers who lost their sons they too can auction their sons uniform and give money to your trust. I’ll tell this to my mom dad this great idea of yours as I lost my brother and they their son in 2005 in Srinagar. Please send your account no so we could transfer money raised by auction of uniform of my brother. Wow Mrs Funny bones just by wearing uniform costume the feeling of defence doesn’t comes. You need to life no less ordinary.”