Manodharma: Evocative abhinaya of the inner dancer… a world beyond teaching

Abhinaya comprising gestures and facial expressions was never intended to be a structured part of the dance. 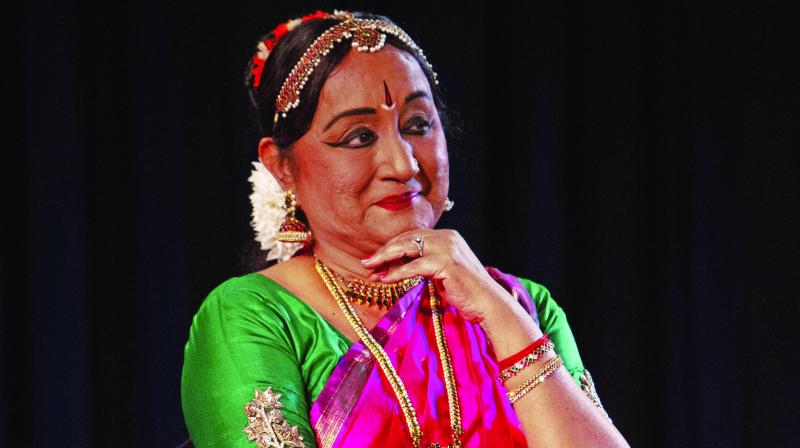 The two-day Manodharma Dance Festival, conceived by Odissi artist Sharon Lowen and mounted at the India International Centre (IIC), New Delhi by Manasa — Art Without Frontiers, put the searchlight on an aspect of dance which is difficult to measure and is beyond teaching. Concerning creative imagination which comes from the inner dancer, “Manodharma”, which leads to evocative abhinaya, is an acquired artistic dimension due to years spent on the art form, which is like the raga elaboration in music, and enables the artiste to build around and expand an idea in myriad ways. It signifies absorption of an entire ethos of an art tradition over time, painting the dancer’s inner ideational landscape from which dance images are spun out. An interpretation of a lyric allows the dancer the artistic freedom to elaborate on the musical statement, with on-the-spot creativity or improvisation — making each rendition of the same item spontaneous and different. Abhinaya comprising gestures and facial expressions was never intended to be a structured part of the dance. The very restrictive “choreographed” abhinaya item rendered by artists today is a contemporary phenomenon, stunting the expansive nature of dance expression.

Veteran Lakshmi Vishwanathan’s Bharatanatyam representing the Tanjavur Bani, made an excellent start for a festival on Manodharma — for she is one artist for whom technique has served as a means of expressing the inner spirit of the dance — which lies in the “how” of the rendition — transcending trite concerns like the “what” of the theme and its contemporary relevance. Dipping into the heart of Tamil poetry which from time immemorial has provided the inspiration for the dance of the region, Lakshmi commenced with Appar’s verses “Kunittha puruvam” sung in viruttam fashion, describing Lord Natarja’s mien, concluding on the wonder of feasting one’s eyes on the glory of the dancing Lord, for which any number of rebirths as a human being (manidappiravi) would not suffice. The recital continued with the 7th century Thevaram, a Tirugnanasambandar composition, “Sirayarum Madakkili” set to Shuddha Saveri ragam, which formed an ode to the pet parrot the nayika tempts with honey-sweetened milk, entreating it to carry a message of love to the Lord and to utter his name just once. The cream of interpretative excellence came in the Telugu Pada Varnam in Kalyani, “Sarasijakshulu nee vani” a composition of Sivanandam of the Tanjore Quartet. Addressing Lord Rajagopala, ensconced in the handsome Mannargudi temple, the nayika in her deep desire calls out to him (“Vaccitira”) for she is wilting away in unrequited love. Exalting Mannargudi as the Dwaraka of the South, she confesses that she would much rather that “Soundarya Gopala”, instead of sporting with so many Gopis, engaged only with her (“Sarasooda nanne Na Soundarya Gopala”) What struck one about Lakshmi’s interpretation was the relaxed, natural air of intimacy in the nayika’s exchange with Gopala. The elaborations spun round each line of the varnam flowed in spontaneity, and along with minimalism sans too many gestures crowding each statement, were the bodily attitudes (angikabhinaya) conveying emotion, along with subtle mukhabhinaya. One hand turning her own head to a side or running over her chin, beautifully conveyed the feeling of the Lord’s caress. The brief teermanams, with the same movement economy, in the placing of the rhythmic syllables, created all the impact. They came as real punctuation after every statement rather than as prolonged spurts of distracting virtuosity taking away from the integrity of the varnam structure. The total effect was also due to the excellent musical accompaniment led by Sudhasini’s nattuvangam and the clear voiced classicism, clarity and melodic richness of Sivasri Skandaprasad’s vocal support. Being a dancer herself, the gesture cues in the spontaneous abhinaya were easily grasped by her. M.V. Chandrasekhar’s sensitive mridangam and V.S.K. Annadorai’s violin melody completed the team.

The abhinaya part had Marimuttu Pillai’s composition “Edukkithanai Modi” in ragam Suratti — a Ninda Stuti revelling in the license allowed to the true devotee, who addressing Lord Shiva asks, “Why this indifference to me? Did I ever complain about the way you destroyed three cities with just a smile, or talk about your unknown parentage or the fact that you hide a woman’s body in your left half? Did I ever mention that you got your son married to a gypsy? Then, explain this churlishness.”

The pick of the abhinaya section was the Javali — by Maharaja Swati Thirunal “Itusahasamulu elanapai Chakkane na swami” in the rare raga of Saindhavi, with the nayika berating Lord Padmanabha for his mischief in teasing her. Pretending an innocence, she complains, people now are making fun of her. Lakshmi’s interpretation caught the tongue-in-cheek attitude most convincingly. She concluded with tevaram as sung and recited by the Oduvars in temples in the South — “Munnam Avanudya”, showing the possessed nayika, after frantically asking for details about the Lord, forgetting herself, surrendering at his feet.

Lectures next morning on Manodharma saw Lakshmi Viswanathan pinpoint the intertwined nature of music, dance and poetry in Bharatanatyam. The dancer, ignorant of ragabhava and how music brings out and connects with emotions, is on an art journey going nowhere. “Aindu Kai” (five hands) was all that the traditional Guru, who never performed, gave to the disciple for the arangetram debut. Simple hand gestures with Korvais marked the formal process of preparing the taste buds for further statements. Knowing the texture of the historical context of what one is presenting, “seeing”, “believing” are all involved in Manodharma, helping bring out the inner vision of an emotion, and communicating it to the audience. Educating oneself on the poetics of dance is a must to understand the nature of “prema bhakti” — the urgency of that nayika’s call, beyond reason, laced with layers of the erotic and the devotional. Mythology in dance calls for the study of the characters involved, giving ample space for imaginative interpretation — for no Guru teaches the enactment of myth. Poetry is the “elixir of imagination”, said Lakshmi, quoting verses of the 7th century poetry of Tayumanavar, and a verse from Kamba Ramayanam describing the physical perfection of Ram — where whichever part of Ram’s body the eyes of the onlooker happened to fall on remained transfixed on that point only! 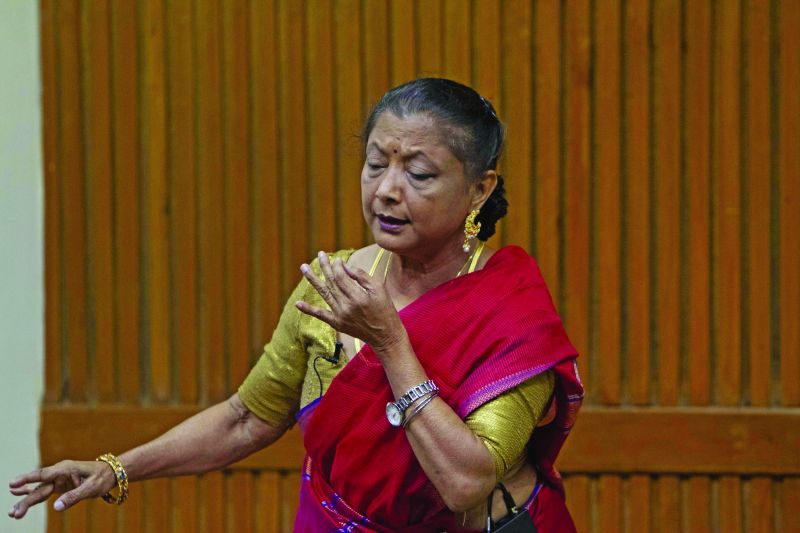 Kathak exponent Saswati Sen incisively spoke of the dance journey from Diksha (seeing and learning) to Shiksha under a teacher to the final stage of Pariksha involving Manodharma. Based more on vakyaartha (sentence and meaning), than shabdaartha (word meaning), Saswati’s first impressions of Kathak elaboration were of watching late veteran Rohini Bhate portray a pigeon pecking (holding the idea for 15 minutes through variations). Then Kathak Kendra director, Jivan Pani, who encouraged Kathak based on poetry in all languages, not part of traditional Kathak, while explaining abhinaya interpretation, emphasised the nayika’s status and social level (Uttama, Madhyama or Adhama). For instance, a portrayal of Uttama Nayika Radha called for a certain dignified subtlety of emotion — unlike an adhama who in a similar situation would express herself louder. Body postures were the first consideration even in abhinaya. A character like Satyabhama called for an extra pull of a straight body, denoting an aristocratic bearing, indicating status consciousness and her own physical allure. Saswati’s first experience of Angika for abhinaya was in the dance scene in Satyajit Ray’s film Shatranj ke Khilari, with Guru Birju Maharaj meticulously rehearsing her on body angles, eye glances, head turns, for no movement, however slight could be indulged in without considering the camera angle. Contrarily, dancing for Kamalini Dutt’s Doordarshan film (excerpt screened) had the camera catch miniscule details of facial expressions (mukhabhinaya) specially the eyes (lost in the large performance spaces of auditoriums). Birju Maharaj’s abhinaya mentoring emphasised observing, watching and then internalising. Interesting fleeting references included concepts like elaborating “Ghir Ghir Ayi Badariyan”, or communicating an abstract idea like darkness or suggesting sunrise, performed to Alap, Jhod, Jhala in Raga Parameswari, or subtle change in gait between suggesting a character born blind and one blinded later, etc.

Pointing to Manipuri’s exclusive abhinaya treatment maintaining the inner expression that involves Manodharma, Guru Singhajit Singh underlined the complicated relationship between Manodharma and mind in art. With fast changing tastes making art pleasing and innovative, the dharma of art, which was never to provide entertainment at the superficial level, seems absent. Traditional Indian art needs inter-cultural understanding for people to appreciate Manipuri where the dancing has no eye contact, where no word translation into gesture exists except some laukika mudra, where traditional performance is not frontal but circular (mandala) and where abhinaya does not involve the face.

Saroja Vaidyanathan stressed Kalpita Sangeet, and asking the singer to sing one line (“Draupadi ki laaja rakhi tum…”) presented the dice scene and Draupadi being saved from dishonour by Krishna. Even her excerpt from the varnam in Dhanyasi “Nee Inda Maayam” had the episodic narrative treatment in the dance. One longed for more of the interpretative, but that was her perspective on Manodharma. 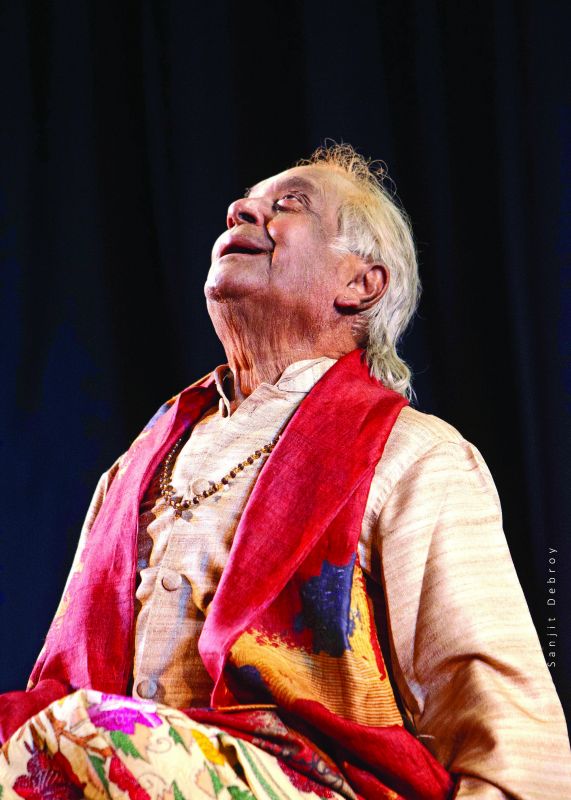 Kamalini Dutt, emphasising learning to teach and teaching to learn, spoke of Abhnavagupta’s Rasa theory. Manodharma which enriches abhinaya, is an individual capacity where mind, intelligence, understanding, perception, the senses and will are all involved. Ultimately imagination, reflection, desire, mood and temper are controlled by the mind (manas) which ensures being present in the moment and as with the famous quotation, “yatho hasta tatho drishti…”, she would put the mind first, for how does the hand move unless the mind wills it? Abhinaya needs Manashuddhi — or a clean mind. Kamalini’s choice of the 89th shloka (a Ninda Stuti) from Shankaracharya’s Shivanandalihiri, “A’sanam garalam phani kalaapo…” shows the devotee mock Shiva asking “With poison as food, snake as garland, elephant hide as garment and ox as vehicle, what can you grant me except devotion offered at your feet? Vasu’s abhinaya demonstration imaging the irony and humour in Shiva’s extended family entourage of bison, snake, elephant, lion, mouse and peacock lay in the ideational flashes stemming from Manodharma.

Sharon Lowen’s disciple, young Viswanath, presenting the Jayadeva Ashtapadi “Dheera Sameere Yamuna tere” showed the ability to erase the self, becoming one with Radha and her sakhi.

The finale saw Pandit Birju Maharaj’s “Bhav Batana” (rising above jetlag and a travel-weary body) creating magic. Starting with Bindadin Bhajan in piloo, the time measurements in the oh-so-subtle eye, head and torso movements expressing “Ched karat naahi man” in “Janede maika suno sajanva”, to the famous Thumri “Kaun gali gayo Shyam”, the audience was in another world. The innumerable ways of suggesting the colour red in “Balma re chunariyan maika laala rangade” or expanding a doha “Nayi abala Rasbhed na jane”, or subtly using the outer hand or palm to suggest a dark Krishna or a fair Radha respectively, or convey, while seated, the sway of the swing in “Jhoolat Radhe Naval Kishor” in raag Desh, this unforgettable performance, an imprint of a long journey in art underlined the music/dance/poetry togetherness. Music accompaniment had tabla by Utpal Ghoshal, Anil Misra on sarangi and melodious vocalist Jaywardhan Dadhich stepping in only when Maharaj’s own singing stopped.