Dad died this evening at 2.45 pm after a massive heart attack, his son said. 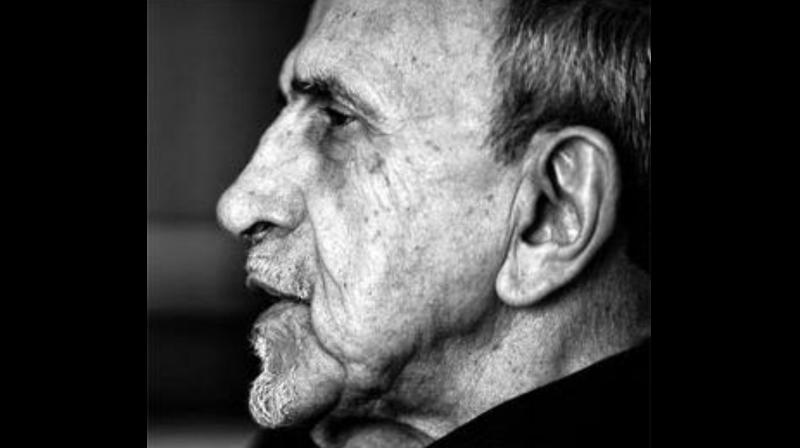 The thespian dies at 94.

Theatre doyen and legendary teacher Ebrahim Alkazi died on Tuesday afternoon after suffering a heart attack, his son said. He was 94.

"Dad died this evening at 2.45 pm after a massive heart attack. He was admitted to the Escorts hospital the day before yesterday," his son Feisal Alkazi said.

Born to a Saudi father and a Kuwaiti mother, Alkazi, who had eight brothers and sisters, remained in India after the Partition in 1947, even as other members of his family migrated to Pakistan.

Alkazi produced over 50 plays, including Girish Karnad's "Tughlaq", Mohan Rakesh's Ashadh Ka Ek Din,  Dharamvir Bharati's "Andha Yug" and several Greek and Shakespearean plays. Alkazi was the longest serving director of the National School of Drama, serving in the position between 1962 and 1977.

Trained at Royal Academy of Dramatic Art (RADA), Alkazi was known to undertake rigorous research before producing a play. He won the BBC Broadcasting Award in 1950. Starting out as an English-language dramatist, he later revolutionised the Hindi-language theatre too.

A noted art connoisseur, collector and gallery owner, he also founded the Art Heritage Gallery in Delhi with his wife, Roshan Alkazi.

Alkazi was awarded the Padma Shri (1966), the Padma Bhushan (1991), and India's second highest civilian award the Padma Vibhushan in 2010.

Director Sudhir Mishra was one of the first to pay homage to the theatre veteran. He tweeted: "One can write a volumes about him . A theatre Director , a teacher , a art curator . A great great man . Unfortunately we like mediocrity! (sic)"

Actor Nawazuddin Siddiqui took to Twitter to pay his tribute to the doyen of Indian theatre.

The true architect of the Modern Indian Theatre. The Doyen who possessed the extreme knowledge in all the aspects of ART. The magician who nurtured many greats of theatre.
May your brightest spark from the heaven keeps us enlightening #EbrahimAlkazi
#RIP pic.twitter.com/PjYxRybpSr

Actor Danish Husain tweeted a photo of the late actor and wrote: "End of an era".

Very sad to know about the passing away of the legendary Ebrahim Alkazi who revolutionized theatre in India and became one of the most prominent theatre artistes. May his soul Rest In Peace 🙏🙏

Sushant Singh, popular TV actor who came into media spotlight during the anti-CAA protests, tweeted: "My Guru, thank you for everything. On your final exit from this stage, I salute you and bid you farewell with a standing ovation."