Beecham House, a six-part historical fiction series set in India in the pre-colonial era, is directed by Gurinder Chadha. 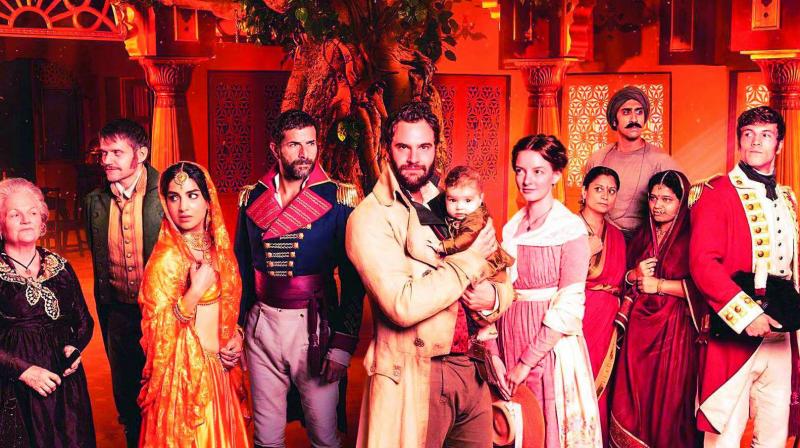 A scene from the drama
Rating:

Even in 1795, Delhi was considered a powerful and rich city, control over which would make it easier for the British to eventually rule all of India. The six-part series on Netflix called Beecham House captures the essence of that era. This historical fiction drama is set in the time when the British East India Company was plotting to slyly take over Delhi, while it was ruled by Emperor Shah Alam II. While it’s meant to be fiction, the character of the emperor in the series (played by Roshan Seth) is loosely modelled on the real one.

The main protagonist though, is an upright British gentleman John Beecham (Tom Bateman), who leaves the East India Company after he witnesses some appaling acts of cruelty but decides to stay in India as a trader. He helps save the Maharaja of Kalyan   (Denzil Smith) and his two daughters, Kamlavati (played by Sayami Kher) and Mallik (Pallavi Sharda), from dacoits and predictably the older daughter falls in love with him and bears him a son. Kamlavati names him Agastya while John calls him August. The story moves forward as circumstances compel him to move to Delhi to take care of his infant son.

While the script may appear somewhat clichéd, replete with the whites lording over servile desis and palaces full of intrigue, it is the performances by the foreign actors that actually make it a fascinating watch. Bateman plays the part of an honest officer with earnestness and the rivalry and undercurrents of tension between him and Gregory Fitoussi, who plays the French General Castillon, adds colour to this drama. There is a British love element who creates a deeper wedge between both these men with her dainty English charm. Dakota Blue Richards as Margaret Osbourne, flits in and out of the series and her role is mostly about keeping the rivalry alive. Beecham’s mother Henrietta is an interesting and colourful character who unwittingly elicits a smile as you watch her battle the Delhi heat and the spicy food amongst other aggravating things.

The Indian actors, except for Shriya Pilgaonokar who plays a nursemaid called Chanchal, disappoint, as they are reduced to mere caricatures who speak in an annoyingly exaggerated Indian-accented English. Chanchal predictably falls in love with Beecham’s younger brother, Daniel and it is not hard to guess how this sub-plot unfolds. What is hilarious though, is Lara Dutta’s encounter with John Beecham as Begum Samru. The actress, who is sadly reduced to a mere three scenes, plays Begum Samru and is spotted chatting with John in strongly accented English, sounding more phirang than him. There is also a needless love-making scene between her and Castillon, which appears incongruous, as it is not really established why they are in bed together. But since this is a six-part series and the climax of the first part shows promise of much more to come, we shall perhaps discover the reasons in part two.

All in all, director Gurinder Chadha has woven a colourful tapestry and great visuals of palaces and beautiful costumes that makes this series worth a watch. We just wish she had paid more attention to the Indian characters and not projected them as exotic and sycophantic creatures. One hopes that the characters will evolve to express themselves more naturally and assert themselves more realistically in future episodes.