A unique theatre initiative invites city goers to perform their favourite parts on stage and enjoy the limelight for a few minutes. 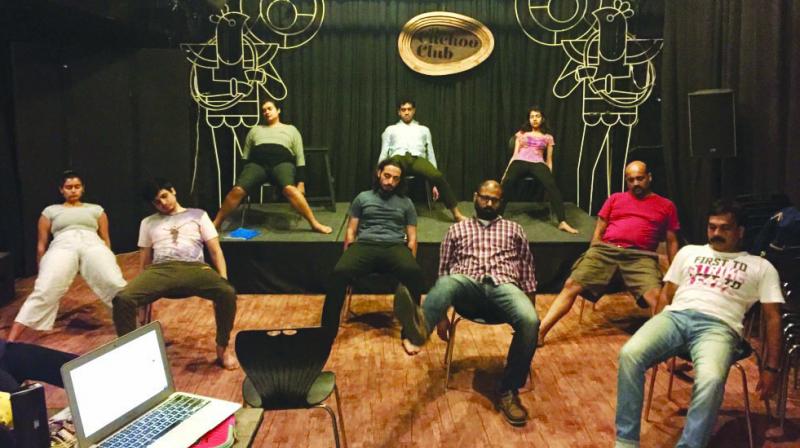 The performers partake in a workshop

Maybe in the shower or in front of a mirror in a deserted room, the thought sneaks up on us once in a while – that of being a star on stage, commanding the attention of a rapt audience. However, in minutes, reality takes over and the dream is discounted. But no more, for Kyla D’Souza, Founder of The Peas & Carrots Theatre Co. is all set to give city goers a chance to fulfill their stage dreams through Solo Sundays, an initiative that invites almost anyone to perform a monologue on stage. And the process is rather interesting. “We put out a casting call on our social media channels. Interested persons can send in the monologue they would like to perform, and then, an audition is held.

Selected persons are invited to an acting workshop, where not only are their pieces refined, but they’re also taught basic tools that actors use and can be applied to any profession such as public speaking skills, team spirit, etc,” shares Kyla, who has trained at The Lee Strasberg Theatre & Film Institute, New York. Post the wokshop, you get your five to six minutes on stage and audiences can watch you transform into your favourite character.

When asked what made her come up with the initiative, Kyla says, “I’m an actor myself and there have been times when I’ve read a play or seen a movie and I’ve wanted to play a character I’d seen in it. But in order for that to happen, someone has to produce that play, and I have to be cast in that particular role, which rarely happens. There’s so much of talent in Mumbai, but there aren’t enough opportunities for people to just get up on stage and do something. So I thought to start this initiative where anybody can audition with their favourite monologue or character, either in Hindi or English.”

There was also a reason for choosing monologues rather than complete works, and Kyla says this is because “It helps expose audiences to the works of different playwrights from around the world. You get a quick insight into characters, theatre styles, writing styles and themes. Also, for an actor, it trains you to hold an audience through just a monologue. The aim is to build a bigger and better theatre community, not just for aspiring actors but for everybody,” says Kyla. Thanks to the monologue format, the last installment of Solo Sundays saw performances from the Mahabharata, Anton Chekhov’s On the Harmful Effects of Tobacco, Rajiv Joseph's Bengal Tiger at the Baghdad Zoo, H.G. Well's The Invisible Man and several others.

“There was also diversity among the actors for there was a dentist, a flight attendant, a teacher, upcoming and veteran theatre actors among the eight performers,” shares Kyla, adding that the youngest performer was 22 years old and the oldest 45. Performers are encouraged to dress the patand even introduce props to aid their performances.

But Kyla says this journey has just begun, for she is eager to fine-tune the initiative. “While the last workshop lasted for four hours, our next will go on for two days, because I realised that there is a lot that can be worked upon. Also, apart from monologues, we want to explore short, two actor pieces and even a musical theatre edition,” she shares. The actor is also planning to rope in fellow theatre professionals for these workshops, like those from the Royal Academy of Dramatic Art, London and other institutes.