With social media trolls having a field day with Milind Soman and Ankita Konwar’s relationship. 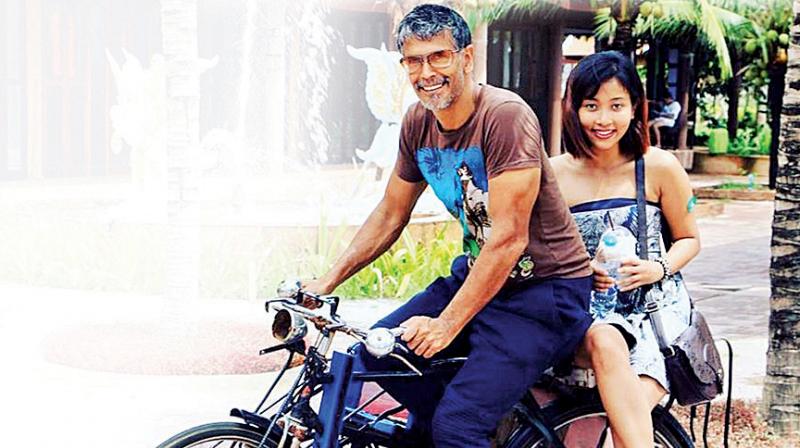 Although Milind Soman has been dating flight attendant Ankita Konwar for quite a while now, his recent pictures with the girlfriend kicked up quite the storm on social media this week. The reason? Milind just turned 52, while Ankita is merely 24 years old. Social media platforms proceeded to claim that Ankita is just 18 years old in memes and jokes, whereas others just gawked at the age gap between the two. While the model-turned-actor scoffed at the hullabaloo over the age difference, many also wondered what the fuss over two consenting adults dating was.

If there is an understanding between the two, however, society should just mind its own business, says actress Patralekha decisively. “My parents have an age gap of around 10 years between them and they’re happy. They met, fell in love and decided to get married — it was their decision. When it comes to any kind of relationship, I think that it should simply be left to the couple. Age, especially, is the last thing that should come in the way of happiness,” she scoffs.

Columnist and luxury consultant Nisha Jamvwal takes a closer look at why older men, such as Milind, go for relationships with women so much younger than them. “Couples don’t care about the age gap, only the outside world does. Men are more strongly drawn either to older women because of their sexual expertise or the sense of youth and adventure with a younger women. The thing is, any relationship, even a friendship, based on agendas and selfishness is bound to crumble, age or no age difference,” she says.

In Bollywood especially, the columnist feels, with the need to appear young being so important, many actors get attracted to younger women.  “It is important to look and feel young what with directors expecting 50-year-old men to play a young lover and sometimes even a collegian. Bollywood is full of such examples like Aamir Khan who went for a younger wife, because he is experimental, young at heart and eager to always reinvent himself. However, at the end of the day, couples don’t care about the age gap, the outside world does,” explains Nisha.

Film historian S.M.M. Ausaja feels that it is just an unfortunate state of affairs that couples’ lives are dissected simply because they don’t conform to society’s idea of a “normal” couple. “Bollywood just bears the brunt of this more than other industries because it’s in the spotlight. Even back when Dilip Kumar and Saira Banu first got into a relationship, there was a hue and cry, but then they got married and somehow that made things more legitimate, and people stopped talking about it. Couples who aren’t married, on the other hand, have to face a lot more ridicule and slander,” he muses.

It is not just real life but even reel life where this disapproval extends to and that, Ausaja feels is a dangerous trait. “When Amitabh Bachchan has a dance number with Shilpa Shetty in Lal Baadshah or played an older lover to Jiah Khan in Nishabd, people disapproved of that as well. However, this disapproval of anything that’s not by the book hampers art. And in real life, it’s just unnecessary,” he shakes his head.

Life coach Chetna Mehrotra says that couples with age gaps are dime a dozen, citing French President Emmanuel Macron, who married his former teacher, causing a worldwide media buzz. “There are cycles in what society deems as proper and normal in terms of relationships — just as there are cycles in fashion. Hence, a bigger age-gap between couples was not really as big of a deal a few decades ago, as it is now. Also, the common perception is that, if both the man and woman are of a similar age, they will be in a similar place emotionally, economically and even in terms of hormones,” she explains.

However, such a scenario may be harmful for the couple itself, unless there is complete understanding. “When so many people are talking about you, and slandering you, there may appear a rift between the couple in question. Unless you are absolutely confident in yourself, and are constantly communicating with your partner, this kind of outside pressure may cause irreparable damage to a couple,” she warns.

Though we tried to get in touch with Milind himself, the actor was unavailable for comment at the time of going to print.