The actress was abducted and molested by unidentified men when she was returning home from a shoot in Ernakulam district in Kerala. 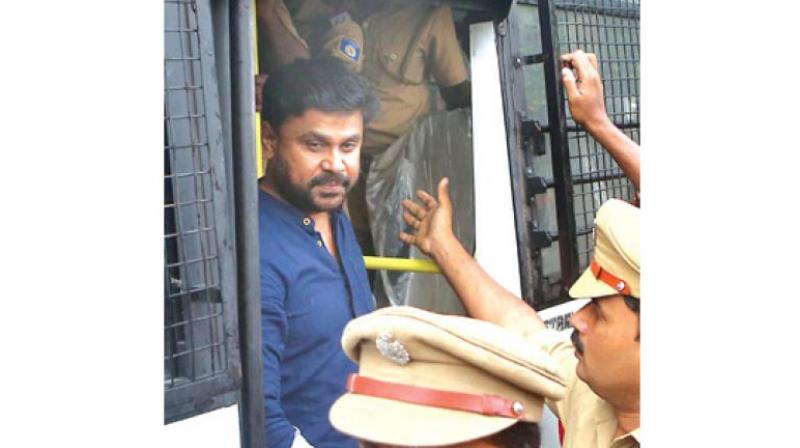 Kochi: Superstar Dileep was dragged to court in a police van from Aluva jail in his hometown, which is about 25 kilometres from Kochi. A fleet of police vehicles escorted the van amidst reports that an angry mob could cause chaos.

When Dileep's lawyer filed for bail, the court said that it would hear Dileep’s bail request only after two days, allowing the police to interrogate him in the meantime. The police wanted his custody for three days but the court granted them two.

Police sources said they are investigating allegations made on Dileep that he offered a man 1.5 crore rupees in 2013 to attack the actress and wanted the assault recorded on video and nude photographs clicked.

The actor bore grudge against the actress, as she revealed his affair with Kavya Madhavan to Dileep’s ex-wife Manju Warrior, which led to them falling apart.

As he sought bail on Wednesday, Dileep’s lawyer told the court that his client has been trapped in a conspiracy scripted by "a very fertile imagination."

"Dileep has acted in many movies, but this is the best script and highly imaginative," lawyer K Ramkumar said, calling it "an indiscriminate arrest without any evidence in the remand report to prove his crime at all."

On Monday, Dileep, 48, was arrested in the abduction case, after long hours of interrogation session by police officials.

He was sent to police custody for 14 days on Tuesday.

On February 17, the actress was abducted and molested by unidentified men when she was returning home from a shoot in Ernakulam district in Kerala.

The incident took place when the men stopped and hijacked her car near Athani in Angamaly. She was molested in a moving car till they reached Palarivattom, which is roughly 25 kms away. The accused men got down at Palarivattom and fled in another car.

The gang also took videos and photos of her and threatened her of dire consequences.

Six people were arrested earlier this year, including the main accused Pulsar Suni, a driver she had sacked and the man the police allege Dileep contracted to attack her.

While the actor has said he does not know Pulsar Suni, the police has found out that Dileep had known Suni for many years and that the latter was present at many of his film shooting venues.

The actor's lawyer challenged this argument in the court saying, "Dileep is a superstar and many come to meet him during his film shoots. He doesn't know everyone."

In the next two days police are expected to take the actor to places where the conspiracy to attack the actress was allegedly hatched. The police could also summon others from the film industry for questioning.

After he was sent to prison on Tuesday, the Association of Malayalam Movies Artistes sacked Dileep, after top actors met at mega star Mammootty's Kochi home.