Same was the case in Manipur, in the far northeastern corner of India, was closed to foreigners and most Indians. 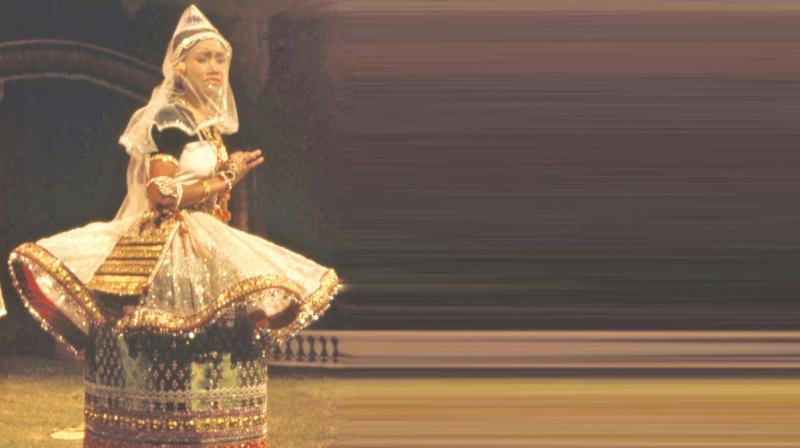 One of the earliest memories I have of her are from the late 80s or early 90s when she was dancing at the US ambassador’s residence. Her fuchsia pink and parrot green bordered costume fashioned from a Sambalpuri silk saree is still vivid in my memory. She danced like a dream. All the while we kept wondering about the logic of having and Indian dancer perform Odissi for an American function. When I asked her name from someone they said Sharon, which I confused with Sharan and assumed she was Indian. It turned out that she was an American living in India.

I didn’t think too much about it as those days it so transpired that there were many foreigners learning classical Indian dance and many of them would be seen around the Mandi House area either attending classes or attending others’ performances. Subsequently our paths crossed and I couldn’t help but be swept off by this amazing person who was a scholar and a dancer who was proficient in diverse forms like Odissi, Chhau, Manipuri and western classical ballet. Now as a Guru, I hold her in the highest esteem for not once have I met her and not learnt anything new from her about life and living and even about my own country. She has spent nearly half a century living in India, travelled extensively and at a just-concluded exhibition “Looking Back to Move Forward” of photographs by her about her India journey, it was like seeing history unfold.

“I arrived in India in 1973 as a Fulbright Scholar to continue Manipuri, armed with a Nikon camera and a year of photography classes at the University of Michigan during my MA in dance. My documentation has not been shared before as my career as a performing artist gradually took precedence over returning fulltime to academia,” says Sharon Lowen with a smile.

The exhibition mounted under the aegis of the Looking Back to Move Forward Festival had seminars and performances too. The exhibition segment was curated by Sanjit Debroy holds up a mirror to the resurgence and awareness of classical dance traditions of India in the second half of the 20th century as it brought legendary artists and rare dance genres to public attention. These images captured in Delhi, Kolkata, Imphal, Seraikella, Baripada offer a unique entre into the cultural activity of the 1970’s and 80’s.

Well before the Sangeet Natak Akademi headed by Keshav Kothari started bringing troupes to Delhi as part of Lok Utsavs, Chhau was virtually unknown outside of the small triangle of Odisha, Bihar and West Bengal as it was performed as part of the elaborate rituals and ceremonies of the springtime Chaitra Parva festival. Vedic, mythological, nature and human themes are expressed with martial vigour counter-balanced with delicate nuances. Sharon travelled into the interiors where Seraikela Chhau of Jharknand, formerly in Bihar, and the dramatic Purulia Chhau of West Bengal are performed wearing masks. The non-masked Chhau of Mayurbhanj in Baripada, Odisha flourished under royal patronage as did that of Seraikela. Doing that four decades ago wouldn’t have been easy and especially for someone who didn’t speak the language.

Same was the case in Manipur, in the far northeastern corner of India, was closed to foreigners and most Indians. Even now few are aware that dancing in Manipur is a form of community worship that enhances a close connection between man and his/her Creator. The show had pictures of the Maibi Jagoi ritual dance of the priestess-oracles of the pre-Hindu Lai Haroba festivals. Chosen by fate when certain psychic signs and falling into trances are exhibited, both men and women dress as women to perform the dances for the preservation of the world. Vaisnavism (worship of Vishnu/Krishna) in the 18th century fostered the development the iconic Rasleela and an inimitable form of Sankirtan performed in Manipur. The high point of the Manipuri dance centers on the Rasleela on a particular incident in the life of Krishna and his favorite gopi, Radha, performed in the round over many hours with delicate elegance and profound devotion. Sharon has captured some rare images of these moments.

The Manipuri devotional singing, Sankirtan, was transformed into a dance with graceful and powerful body movements while the dancer also plays the large cymbals, Kartal cholam, or the Pung cholam percussion with intricate rhythmic cycles. She captures the essence of form with its greatly focused approach. “Of more than one hundred, about forty are still in vogue when performed as part of all ceremonies and religious festivals in Manipur even today. I was privileged to photograph this living tradition in 1974 and ’76 while studying these genres in Imphal,” recounts Sharon.

It is said there are no short cuts in education and no alternatives either. The way an educated person deals with anything reflects in everything they do. The way the photographs were taken and kept all these years is a perfect example of Sharon’s training as a serious scholar and academic. Many of them may not be great as photographs per se, but even when they were taken they must have been by way of chronicling history as it unfolded…and now they are priceless.