Takeaways from looking back to move forward

The crowning part was having Kamalini Dutt speak on what the term guru meant and how it had been devalued. 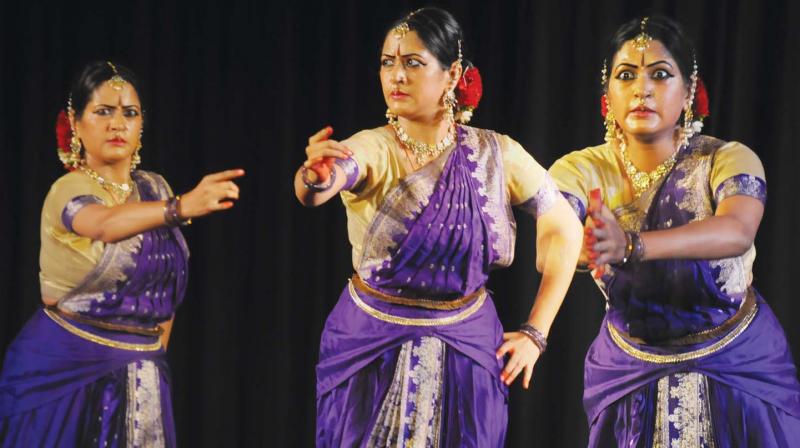 Purvadhanashree with her Vilasini Natyam

Moving through the corridor of time from past to present on to the future, tradition, marked by both continuity and change entails constant revisiting and questioning. For even while carrying on a past legacy, while functioning in the eternal present, it carries with it future aspirations. The unique feature of the packed three-day festival at the International Centre “Looking back to move forward” by MANASA (art without frontiers) in collaboration with the Centre and Alliance Francaise was the morning panel discussions on various aspects of dance, heralded with the recapture of history with an exhibition curated by Sanjit Debroya of Sharon Lowen’s vividly photographed images during forty years of involvement with dance in India. On the transmission of tradition in the classical performing arts from gurus to disciples and from artists to audiences, the panel of gurus Raja Reddy, Gopal Dubey, Saswati Sen (deputising for an indisposed Birju Maharaj), and one of the chief architects of the festival Kamalini Dutt, expressed varying views on what constitutes authenticity — (a loaded term!) in teaching and performance. Through the Sanskrit quotes of Raja Reddy tracing the beginning of dance to the Vedas, to Gopal Dubey the Seraikella guru on his learning days when gurus made students dance from 8 to 9 hours mastering the basics, to Saswati Sen’s concern about the undesirable features creeping into Kathak today, Kamalini Dutt’s statement maintained authenticity being as much in the teaching as in the performance. One cannot help feeling that ultimately the dancer’s is an individual journey, and how much one invests in the grueling process of acquiring command over the art form making it one’s own language of expression and performing it with passion and conviction communicating powerfully to the audience, shows truth coming from the inner artist. Authenticity constitutes that truth.

Listening to young professional dancers, speak about their learning process and their understanding of the art form, after years under a teacher was heartening. Purva Dhanashree referred to the realisation of the enormity of the art form of abhinaya in Vilasini Natyam, whenever she saw her guru Swapna Sundari perform — with elaborations stretching to an hour interpreting just one line in a sahitya. Both Purva and Viswanath Mangaraj (Sharon Lowen’s disciple for over 17 years) spoke with humility, showing deep awareness of the student’s responsibility in having to go beyond just dance movement and technique into music, rhythm, percussion, poetry to understood the true nature and identity of a dance tradition. Purva also mentioned the travails of a teacher transmitting the art form to a younger generation, who, pushed by ambitious parents, are into learning as many skills as possible. The concentration and attention span for dance learning becomes very small, challenging the teacher. Rashmi Vaidyalingam, a student of Raja and Radha Reddy, who took to Kuchipudi after years of learning Bharatanatyam, felt that learning more than one dance form with participation in theatre too, had given her a perspective of interconnections among various disciplines, without confusion of any one form overawing or influencing the other.

A highly informative session was on contemporary media intersection with film, television, social media, and internet, which along with the Guru-Shishya teaching provides information to those who seek it. Sudha Gopalakrishnan’s talk on the kind of work being done in Sahapedia and how apart from performances and interviews, a lot of other information could be availed by youngsters with just a click of a button on their laptops, added valuable inputs for the attending school students, on how to extend their knowledge. Sahapedia has had a scholar, David Schulman, who shared his work with them and one like Killimangalam Vasudevan Namboodiripad, who went one step further and handed over his entire material to them.

The crowning part was having Kamalini Dutt speak on what the term guru meant and how it had been devalued. Just as even a Tansen went in search of the guru Haridas Swami in order to learn music, Bhimsen Joshi to several others representing various art disciplines, have all gone looking for the guru. As against this, the situation today is very different. The word guru was never used in the Natya Sastra though in the 35th chapter the qualities of a teacher are mentioned and indeed such teachers are rare. Guru is one who removes darkness. While the old Guru-Shishya teaching during British rule got diluted, the revival of interest in rediscovering the real identity of Indian culture, with the spread of nationalism, saw institutions like Kalakshetra and Kerala Kalamandalam come up, incorporating the best of the Guru-Shishya transmission method, in a contemporary setting. Today Dance has become an industry. In this age of YouTube and internet, Kamalini’s long years with Doordarshan, producing dance and music programmes, instilled a realisation of how much the camera can contribute in preserving for posterity the rich moments of performance history. She attributed to the camera, the recapture of centre-space for abhinaya which was fast disappearing with large proscenium spaces, where subtleties of face and gesture were getting lost on the audience. The screening of old videos of historical performances, made for an exquisite, nostalgic journey down memory lane — seeing Lachhu Maharaj teaching, or watching Kanak Rele as the tender nayika with subtly varied mukhabhinaya entreat the sakhi to listen to her tale of woe about the nayaka’s deception Prana sakhi yennodu vanjanam seidu…, or experience ‘Bhav Batana’ by a seated young Birju Maharaj singing and interpreting Jhoolat Radha Naval Kishore. As for the picture of young Kelucharan Mohapatra perform the Ashtapadi ‘Kuru Yadunandana’, it left a lingering fragrance and haunting image of a compassionate Krishna in the tenderness of after-love, repairing Radha’s disheveled look — helping regain her independent identity so that the lila of love play can start again.

Watching the speaking eyes of an over sixty-year-old Kalanidhi Narayanan, showed what camera close-ups can highlight in such detail. Dance and music wilt away without ‘rasikas’ and discerning audiences. Regarding music as the birthright of every child who has creative potential, Sitarist Shubendra Rao conducts music education classes in the Nizamuddin Basti for about 150 children. He referred to the abject ‘numbness’ as he called it starting right from the airport checking-in, with the official having to be convinced about the Sitar instrument bag not being a golf kit! “Asked to prove musical credentials, you mention guru Ravi Shankar and the person asks “Who’s that guy?” Shubendra Rao’s methodology of music education has at present nearly 20,000 followers. SPIC MACAY for parents is the need of the hour, he feels. IAS officers being trained at Dehradun need to be treated to frequent doses of music and dance to help develop the inner eye of perception, to be sensitised to the arts.

Now, part of the World Cultural Community, there are over 7,600 schools teaching Indian dance forms abroad.

Sharon Lowen’s students took the stage on the final day, the recital based on guru Kelucharan’s choreography. Viswanath’s Pallavi in Keerwani set to Khemta Tala, was impressive. He also presented Ahe Neela Saila the Salabeg Janana, with a fine sense of theatre. The other dancer who impressed was Nitisha Nanda, whose evocative interpretation of the simple Oriya lyric malli mala Shyamaku dibi was equally convincing in abhinaya and nritta. Trained under several teachers, Madhur Gupta now Sharon’s student, after a very detailed introduction of the Champu Jhagodi Jhagodi rendered the item — requiring more bite in bringing out the ninda stuti sarcasm addressing Krishna. The excellent music support had vocalist Sukant Kumar Nayak, with Rameshchandra (violin), Soumyaranjan Doshi (flute) and Prafull Mangaraj (mardala) and Tushant Kumar (manjira). A marathon effort pulled off smoothly!