We have eyes only for each other: Namrata Shirodkar 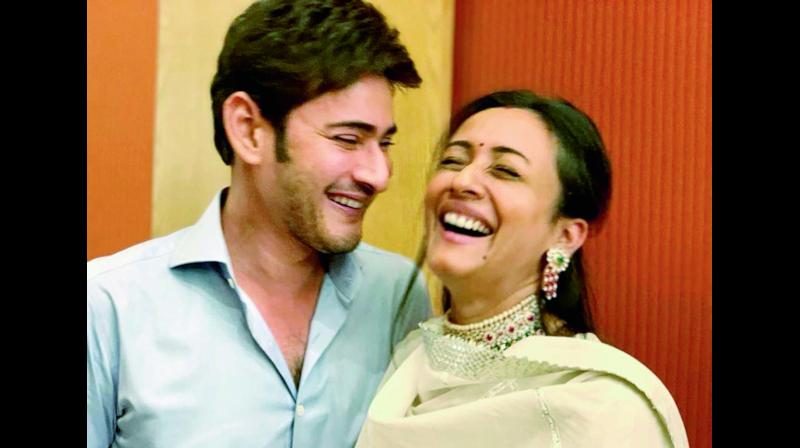 This is the only marriage in the Indian entertainment industry, barring the Sharmila Tagore-Pataudi one, where there has been no scandal or controversy.

“What about Dilip saab and Sairaji? (We tell her Dilip Kumar did have a relationship outside his marriage) Oh, there was a scandal? I didn’t know. Well then, I guess I’ve a lot to be grateful for. The thought of being unfaithful doesn’t even occur to either of us. Mahesh is so shy, he doesn’t even speak to his heroines after a shot. And it’s all about trust, believe me. I trust him completely, and he respects the fact and he trusts me. But yes, you’re right. I do envy my own marriage sometimes. Because there are so many marriages going wrong around me,” Namrata sighs.

She is at the moment juggling with the management of her father-in-law’s home and her own, as her house help has just deserted her.

Speaking of her father-in-law, Namrata recalls four  years before her marriage. “Mahesh and I met on the sets of a film Vamsi. It’s the only film that I did with him and it’s the worst film in both our careers. But we will be very grateful to Vamsi. That’s where we met. I immediately knew this was the man I wanted to spend the rest of my life with. Of course, Mahesh’s family was sceptical of me. They had nothing against me. But they knew nothing about me or my life as an actress in Mumbai. Come to think of it, even my parents were sceptical of Mahesh.”

Namrata and Mahesh had to wait for four years before getting married. “It was very important for Mahesh to convince his family that I was the right wife for him. For four years I just had to wait. We hardly met during that time. All I had to do was wait for Mahesh to convince his family. I’d be lying if I said I didn’t have bouts of anxiety during those years. But I was sure I wanted to marry Mahesh. If not him, then no one else. And he was sure of it too.”

Namrata says the 15 years of her marriage have just flown by.

“My days are so full, I don’t know when I wake up and when I go to sleep. And you know what? I wouldn’t choose any other life for myself. My husband and children are my world. I am asked if I crave for me-time. I don’t! I don’t want time with gal pals. I don’t want time away from Mahesh. Even if he’s gone for two days, I miss him. I don’t have the energy or craving for expeditions and adventures outside my marriage.”

Does she look after Mahesh’s career? “His endorsements, yes. Not his films. It’s a myth that I choose his scripts. If I had any script sense I wouldn’t have done some of the awful films that I did during my brief career in Hindi cinema,” she says.

“None. My life with Mahesh is a dream. I just don’t want to wake up one day to realize it was just a dream. I want my children to value marriage and its obligations as much as Mahesh and I do. Agreed, there is a lot of hanky-panky in the entertainment industry. But Mahesh and I only have eyes for one another.”