Having freedom of expression curbed is already a matter of serious alarm, if sociologist Nandini Sardesai is to be believed. 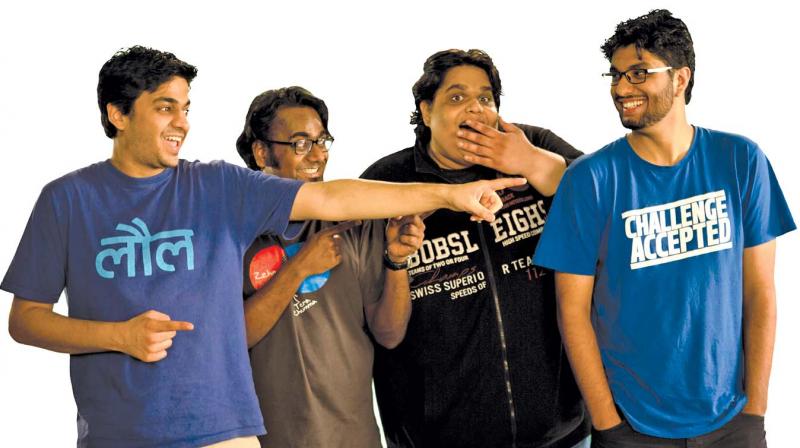 A Snapchat filter and politics don’t mix, the boys at AIB have now discovered. But it looks like the stand-up scene has had enough of being told to not touch politics.

When comedy collective AIB decided to try out a rather popular Snapchat filter on a meme about Prime Minister Narendra Modi, little did they know how the seemingly innocuous tweet would start another controversy. Having come under fire for much of their content, AIB was caught in a storm yet again when an FIR was filed against the collective on Friday, under the IT law.

Despite AIB deleting the ‘dog filter’ meme, which allows users to have faux canine features on their face, comedian Sorabh Pant is confident nothing will come out of the case. “I really don’t think anything will come out of this FIR, because it’s mostly baseless,” he explains. “Also the PM himself has said that comedians shouldn’t be penalised for the kind of jokes they crack. It’s just the fanatics who jump at every small issue.”

Stand-up comic Kunal Kamra, who has himself seen controversy, around some of his content, says that it’s being on the Internet that usually adds fuel to the outrage. “How did we start with Movers and Shakers, and go to Snapchat filters being a problem,” he asks, talking about the Shekhar Suman show, known for its political humour. “First if you wanted to outrage, you’d have to send in a letter to the show, which would get delivered after three months. Now, people have Facebook open, waiting to see if there’s something that offends them, and then look up the nearest police station.”

Laughs Sorabh, “I’ve been making a list of people and things I can’t make fun off according to the messages I get, and the list is endless. Just the other day I made fun of Arnab Goswami and I got death threats from random followers. I met him two days ago and he was just fine; he had no problems. I think we should just ignore the attention-seeking fanatic supporters and go about cracking the jokes we want to, regardless.”

Having freedom of expression curbed is already a matter of serious alarm, if sociologist Nandini Sardesai is to be believed. “What are we heading towards? Why is it being taken so personally?” she asks. “People cannot express themselves in any way. In the past too we’ve had tough PMs like Indira Gandhi and people have made cartoons and caricatures about them. We need sense of humour to prevail amongst people. We talk about the Emergency, but at least that was declared. Now, we’re toying with freedom of expression of the media, people. We’re all afraid to articulate what we feel. It’s a matter of serious concern.”

Kunal recalls a rather interesting brief he received for a corporate show recently. “I was told I shouldn’t make political funnies,” he says. “When I asked if I could joke on Rahul Gandhi, they said yes, Arvind Kejriwal, and they said even they crack jokes about him. When I asked who I couldn’t joke about, I was told it was only the PM that was off limits, especially because the CEO was a fan and he’d get offended.”

Comedienne Dwijal Mehta, says that these controversies can harm creativity in the long run. “Politics has definitely become something you can’t touch anymore. Any light heartedness around a political figure is an absolute no-no. It will either make people angrier or end up killing creativity. Politics is not a huge part of my set, but I would definitely be wary now.”

Kunal adds that he has learned to take threats that come his way lightly. “People who want to threaten you will end up threatening you,” he shrugs. “But when did we take this turn where comedians have had to become more accountable than politicans?”

—With inputs by Dyuti Basu