This new series on Amazon Prime highlights the life of four ladies in a 10 episode saga. 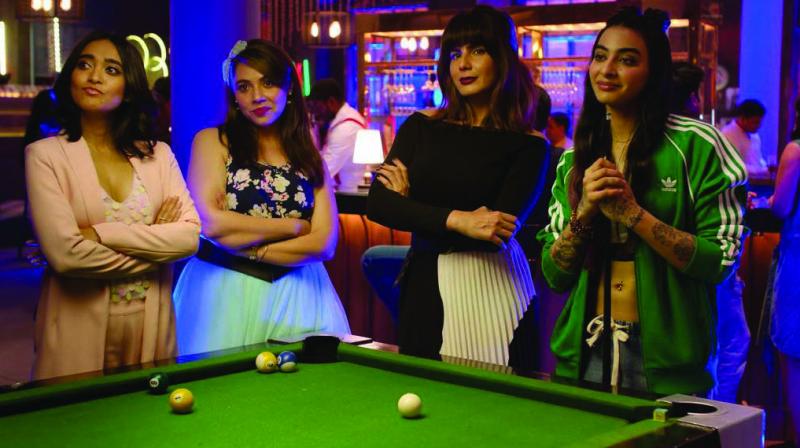 Four single women, lots of sex and alcohol and ranting against the male species.

Four More Shots Please! is the desi web version of Sex and the City. Actually, if you’ve seen chick flicks like Veerey Di Wedding or Angry Indian Goddesses, this 10-episode drama seems like an extension of the same social milieu. The ingredients for these new age dramas are pretty clichéd. Four single women, lots of sex and alcohol and ranting against the male species. Makes you wonder, how the hell these so-called successful female professionals get to work every morning, if they are out getting sozzled ‘neat’ glass after glass, every single night. And of course, a web series must have lots of profanities, which is what the series shows clearly — cuss words are here to stay.

That said, the plot though predictable is racy. There are four single gal pals. The first, Angina Menon, (Kriti Kullhari) is a single mom who is a hotshot lawyer clad in slinky short Western outfits (a far cry from the Indian courtroom scene, where female lawyers are conservatively clad). The second female is Damini Rizvi Roy — an interesting reflection on modern times — where children from inter-religious marriages adopt both surnames. Damini is a feisty editor of investigative.com, who goes hammer and tongs at the establishment and exposes the dark underbelly of India. She pays the price for being idealistic and going against the system and the management. Sayani Gupta excels in her role as she manages to add spunk to her character. There is Manavi Ghungro, who plays a 23-year-old overweight virgin whose sole purpose in life is to get married and the bane of her existence is her pushy mother, played rather well by Simone Singh.

The fourth female is Bani J, who is a delight to watch as she brilliantly nails the character of a bi-sexual Umang Singh, who falls in love with an actress, Samara Kapoor.

The men in this series obviously play supporting roles but the man to watch out for is actor Prateik Babbar, who excels in his role as Jeh Wadia, the owner of Truck Bar, where the girls get sloshed every night. One would really like to see more of this talented actor, who unfortunately fell out of the race as drugs and personal problems took precedence. There is Neil Bhoopalam, in the last scene in 24 hours, somewhat wasted in the role of an ex-husband. Milind Soman, who was once the nations’s heartthrob, is used as eye candy but sadly age is catching up. His presence seems more like a desperate measure rather than an attractive package thrown in by the producers.

Season 1 works, because  there are only 10 episodes but the last episode with open endings clearly indicates that this is not a finite series. But the success of Season 2 will depend heavily on a more finely etched script that can go beyond the clichés of sex and booze.