Prithviraj puts out teaser for 'India's first virtually produced film', where he plays a warrior

The 2019 Lion King was shot using the virtual production technique. 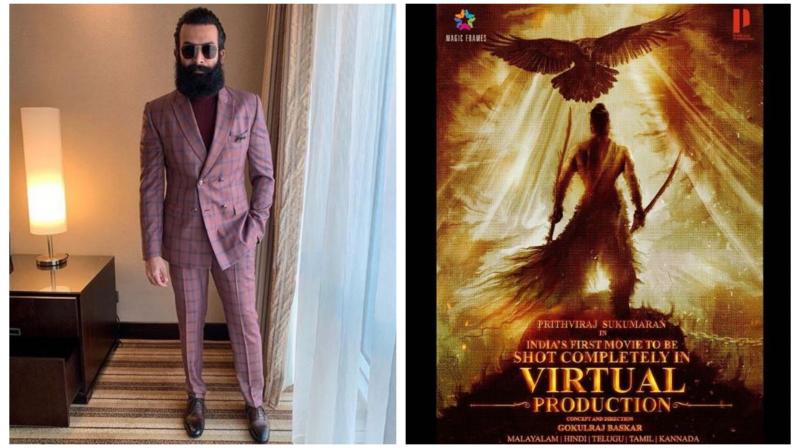 Prithviraj plays a warrior in the film expected to be produced using virtual reality techniques. The popular actor whose stated mission is to transform Malayalam cinema is also a director, producer and distributor of films. (Photos | Instagram - therealprithvi)

Kochi: South star Prithviraj Sukumaran on Monday announced that he is set to feature in a multilingual project touted to be India’s first film to be “shot completely in virtual production”.

Prithviraj, 37, took to Twitter to share the first look of the film, which features him as a warrior.

“This is an exciting new chapter in the art and science of film making! So looking forward to this one! Changing times, newer challenges, innovative methods! And an epic story to tell! Stay tuned for updates!” the actor wrote, without going into details.

So what exactly is virtual production? “Virtual Production is an innovation advanced by Technicolor that allows filmmakers to lay out and establish a film in a digital environment before going on a physical set,” says the Medium blog ‘The Focus’ on news, updates and features on the VFX (visual effects) and animation industries.

The Focus goes on to explain that virtual production “uses a combination of immersive technologies such as virtual reality and augmented reality as well as CGI and game-engine technologies, allowing filmmakers to see their scenes unfold as they are composed and captured on set.”

The 2019 Lion King was made through this virtual production technique.

The as-yet-untitled movie announced by Prithviraj will be directed by Gokulraj Baskar who also came up with its concept, and will release in Malayalam, Hindi, Tamil, Telugu and Kannada.

The marks Prithviraj’s first foray into Kannada, whereas he has acted in all four other languages, primarily in Malayalam where he is one of the top actors.

Most of the responses to Prithviraj’s tweet announcing the virtually produced movie focused on his entry into Kannada films, and many thanked the actor for committing to dubbing in the language.

Prithviraj has also donned the director’s hat for blockbuster hits such as Lucifer that starred superstar Mohanlal in the lead. He is also a producer and distributor of films.

The coronavirus induced nationwide lockdown has forced theatres to remain shut since March and also put a halt on film and TV shoots across India.

Though many short films have been made during the lockdown, there have been no major films shot during this period.

The actor-producer will be next seen in the Malayalam survival drama “Aadujeevitham”.