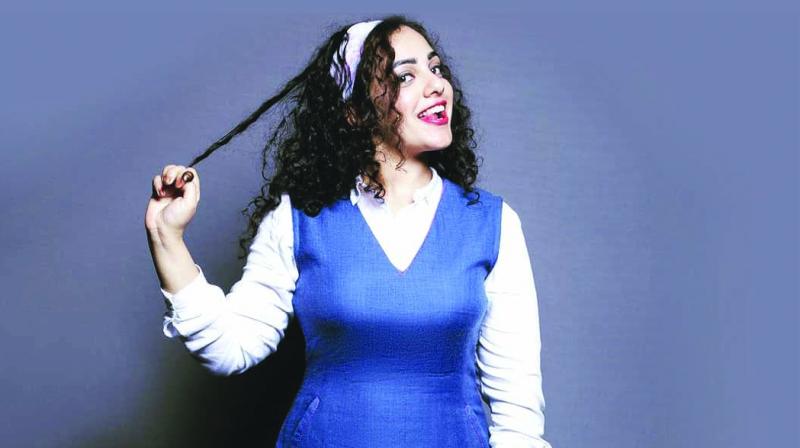 South-Indian beauty Nithya Menon, who hails from a humble background, did not originally plan to get into acting. This seems to have worked in her favour, as she has garnered a reputation of making unconventional choices and only doing films that she likes. The actress, who has forayed into Bollywood with Mission Mangal, got candid  about not wanting to be the centre of attention, her family's views on her profession, remakes, and the unrealistic expectations placed upon actress' looks.

Why did you choose to debut in Bollywood with Mission Mangal, given your flourishing career down South?

Didn’t you expect a typical conventional Bollywood launch like other actresses?

I have never done anything conventional. The way my films were, the way I started off, the kind of choices I made, it was all unconventional. I just went with my gut and how I felt in that moment. I never once planned. I never wanted to be an actress, and that worked in my favour because I only did films that I liked.

But you have such a huge fan base. Didn't you want to have a solo launch film?

Being the centre of attention has never been important to me, it has never even crossed my mind. Only when I am asked such questions, do I think about that. A film is bigger than an actor, and that's the only way we can make good films. We make mediocre films when the actor becomes bigger than his or her film, which is when everything becomes unbalanced. I don't want to be noticed all the time, it will come on my merits.

What kind of scripts are you looking for?

I think it's the sensibilities more than anything else. I don't do films that just make money. As an actor, you have to do it sometimes, but I try and stay close to roles that are as real as possible.

Your South hit Ok Kanmani was remade in Hinid, which bombed. What's your take on remakes?

Actresses who have worked in South say it is a male-dominated industry. How does that compare to the Hindi film industry?

Here in Hindi cinema, it’s definitely more professional. I was very happy to work here; I found the environment much more easy and professional, and less hierarchical.

I think it also depends on the kind of films you do. I have played very important roles in the films that I have done. In Bombay, they were much more accepting and I felt less of a gap.

How does your family react to your success?

I am not from a film family, I am from a simple middle class, very academically focused family. Such creative things are not appreciated or encouraged, butthis was destiny for me.

My family wasn't happy. The parents of our generation feel that you have to have a certain kind of job or they are afraid for you; they don't know if you will be secure. Creative things are all secondary for them, so they do have apprehension towards it. It is slightly changing though; my family very recently started to watch my films. And no matter what I do, it’s still a kind of a hiccup for them.

These days, we see lot of actresses opting for surgery to look good on screen. What's your take on that?

The more I see it, the more dissatisfaction you have with everything around you. I sometimes wonder 'how can you say that this is not the nose I want, so lets fix it'? That is a very negative attitude. We have to stop making children say that 'your nose is not right' or 'the face is not right'. Actors face comments from very ruthless trolls; they call you all kinds of names. So I am sure it affects people, but you have to be really resilient to understand and say ‘no’.