Iifa 2018: A three-day show all set to unfurl in Thailand

The main Iifa Awards event and proverbial green carpet walk will be on Sunday at the gorgeous Siam Niramit Hall, where it was held last time too. 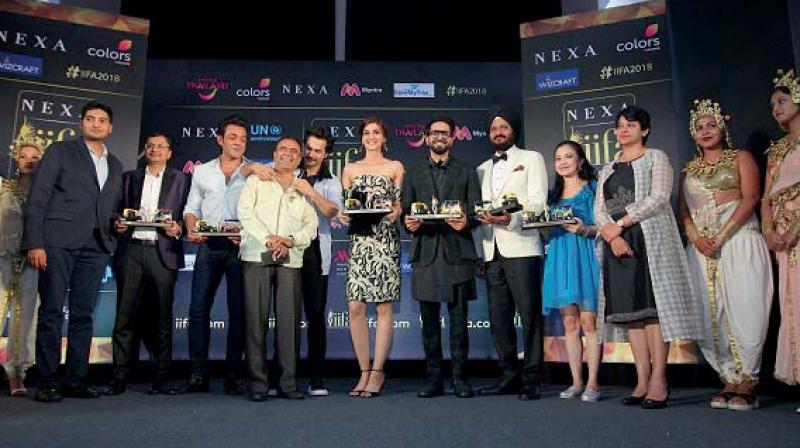 Key dignitaries and stars at the Iifa Mumbai press conference.

Bangkok: It’s probably the most low-key Iifa Awards event one has seen, but the three-day Indian cinema awards extravaganza is all set to unfurl in the City of Angels this weekend.

When one remembers the mega hype and hoopla at the last Iifa Awards event here in 2008, in the presence of superstars like Amitabh Bachchan, Akshay Kumar, Kareena Kapoor and Deepika Padukone, one is struck by the total lack of media blitzkrieg and starpower, this time.

A press conference is scheduled to take place on Friday, but that’s just a day before the main event.

This writer visited the host-hotel Bangkok Marriott Marquis Queen’s Park, to get some information about the event. But apart from a couple of Iifa banners in the lobby, there was no sign that a mega Indian film extravaganza was to take place there shortly.

However, Arjun Sood, the Indian cluster assistant director of sales, who had earlier worked with the Marriott group in India, and his team, were excited.

“We’ve been in talks since March, but its been smooth and orderly,” he stated “their team members have made several trips to Bangkok, to gauge logistics, locations and their communication has been correct and clear, which our GM Bob Fabiano, who was instrumental in bagging the deal, has appreciated.”

One heard that Bali and Bangkok were the two cities in contention for the Iifa Awards this year. Once Bangkok was chosen, three hotels were considered, before this hotel was chosen.

“We negotiated a lot. It may not be the best deal, but it was not the worst either. We looked on the event as a great marketing opportunity for us,” said Sood.

The grandly renovated hotel (formerly the Imperial Queen’s Park Hotel) was opened in the city only in December 2016 and boasts of 1,388 rooms. In fact, they are the only “Marquis” brand in the Asia Pacific region (the “Marquis” brand needs at least 1,000 rooms). That’s why the hotel has become a big draw with the Indian wedding market (it has held huge weddings by NRI Indians from the Middle East) and also the Indian MICE market (has sold 8,000 rooms, within one year, for this market).

Four hundred rooms would be used for the Iifa Awards, including their five suites. They had been given dietary instructions, and would unleash their “customised hospitality”, said Sood with a smile. He would not inform who would be staying in their top-of-the-line sky suite, with a size of more than 1,000 sq. metres.

As for the stars at this year’s Iifa Awards, the focus seemed to be on youth — Varun Dhawan, Riteish Deshmukh, Kriti Sanon and many second-generation “Kapoors” — Ranbir Kapoor, Shahid Kapoor, Shraddha Kapoor.

A big name announced recently was Rekha, and some more names are expected to be announced soon.

Sood said that their event management team and security teams were in close contact with the organising Witcraft team, and he was sure that the hotel would be able to handle the celebrity guests, as well as the Indian film fans.

No one was available for comment from the Wizcraft team, but Sood stated that the action would begin only on Friday, with Iifa’s first press conference.

The first event of the three-day event, called “Iifa Rocks” is a mega musical extravaganza, with many singers, musical directors from Bollywood — Pritam, Amit Mishra, Nikhita Gandhi, Antara Mitra and various others.

The hosts are the popular Kartik Aaryan and Ayushmann Khurrana.

A special event this year, is the Osians cinema heritage and auction, of old movie pictures, posters, memorabilia by Mumbai’s Osian Foundation, which chairman Neville Tuli said was eagerly looking forward to.

The main Iifa Awards event and proverbial green carpet walk will be on Sunday at the gorgeous Siam Niramit Hall, where it was held last time too.

Anupam Kher will be given the Lifetime Achievement Award for outstanding achievement in the Indian cinema.

In keeping with the low-key tone of this year’s Iifa event, there is not much information of the ticket sales. There are highly priced packages on the website, with names like Rockstar Package, Millennium Star Package, Jubilee Star Package.

One is told that some top corporate companies have offered these packages as incentive rewards.

Among the sponsors, one is impressed by Iifa’s tie-up with Woosh Washing Expert as it deals with gender equality at home — Barabari ghar se shuru.

One hopes that many locals will get to see the Iifa Awards event too, as Bollywood films have been gaining popularity in the Land of Smiles. Otherwise, one wonders why this event would be held in an overseas country.

Tourism Authority of Thailand governor Yuthasak Supasorn hoped the event would be “another amazing Iifa, in amazing Thailand!”

The writer is a critic and commentator on films and culture based in Bangkok, Thailand