In essence, drama class is actually a class about understanding human behaviour, and therefore life. 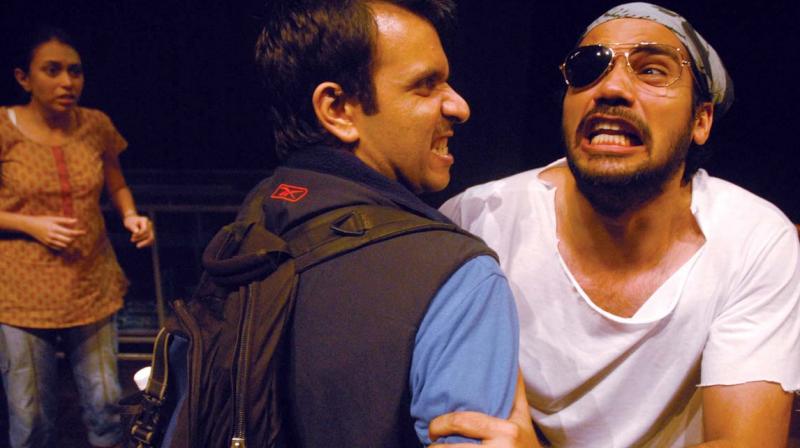 There is a greater sense of individuality in a drama class.

Last week in the euphoria of Teacher's Day, I found myself absentmindedly leafing through my high school year book; mainly looking for memories of myself and friends. However, something made me pause a little longer than expected on the page that said ‘Drama Faculty’. It was a group shot of a half dozen teachers smiling into camera. One face stood out, and with it came a flood of memories. His name was Mick McManus; an overtly gay English gentleman, who had a passion for the performing arts that was infectious. Am not really sure why I liked him over my other drama teachers, or for that matter, any of my other teachers, all I know is I did.

Drama teachers have a privileged role inside a more formal school set up. Theirs is the most informal class in the day, and one where theory and practical application are so enmeshed it's hard to differentiate. To begin with, there are no chairs. Everyone sits on the floor, because in just a minute or two that floor will become performing space. Anything that is taught has to be practiced. Otherwise it doesn't make sense to the student, and there is no other gauge to measure the knowledge transference from the teacher. Drama teachers are also like anthropology professors, teaching students how to observe their world, and create characters based on research. In essence, drama class is actually a class about understanding human behaviour, and therefore life! We learn empathy, and responsibility and presentation. Skills, that even if you never joined the theatre or performing arts, still hold you in good stead, no matter what profession you join. There is also an egalitarianism that creeps in when working in a drama class, because you are not supposed to simply 'accept' but also 'interpret' what you have been assigned. Therefore there is a greater sense of individuality, and analysis of the world in general. That's probably why, a year after I'd left school, I was shattered to hear of McManus' passing. It felt like my whole world had collapsed. I would have liked to have said goodbye.

This same feeling of 'goodbye' crept in on me a few months ago when, in Bangalore, I attended the funeral of Esther Yates. She was the Head of Drama at Christ University. While I had never actually met her, I had interacted with many of her students, who were required to intern with a theatre company each summer. In them I found the same passion and drive that Mr. MacManus had. That is testament to a successful drama teacher. There was a beautiful moment at the end of the funeral, after all the mourners had condoled, a group of about 40 students stood around her casket. Obviously there were tears. But to me it looked like her drama team, all dressed in black, giving her a final standing ovation. It was a moving moment, one which I wish I could have given Mr. McManus.

Drama teachers live on through the work of their wards. Ask any of Ebrahim Alkazi's students and they will pinpoint how much an influence he had and continues to have on their work. These go beyond just exercises or styles of interpretation, but to the very root of who we are as theatre people. Drama teachers change the lens with which we see the world, and that at a fundamental level changes who we are.

Tonight at Prithvi Theatre, I dust off a play that had been shelved for 3 years: Project S.t.r.i.p. Returning to the rehearsal room, older and wiser, I now notice the unseen influence that McManus had on me. There was a question he always asked us on any project, one which I hold very dear and to the core of the work I make: "What new element are you introducing in the play?" The interpretation of the question was left to us. Whether it was new for ourselves, the audience, or for theatre world in general. While I may not have successfully answered the question in all my work, just by asking it allows me to think with fresh eyes.

Quasar Thakore Padamsee is a Bombay-based theatre-holic. He works primarily as a theatre-director for arts management company QTP, who also manage the youth theatre movement Thespo.