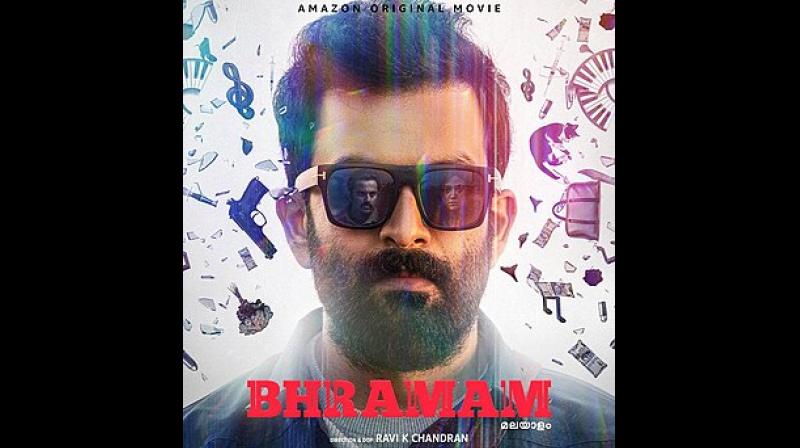 Mumbai: Malayalam crime thriller "Bhramam", an adaptation of the Bollywood hit "Andhadhun", is set to be released on Amazon Prime Video on October 7, the streamer announced on Sunday.

According to the streamer, the film dwells on the dualities of a pianist -- essayed by South star Prithviraj Sukumaran -- who pretends to be blind.

"His musical journey gets interlaced with suspense, inspiration, confusion and drama as he gets embroiled in a murder mystery. As the plot thickens and a set of bizarre events unfold, wit and survival create the fabric of the film coupled with a stellar background score by musician Jakes Bejoy," a statement from the streamer read.

Vijay Subramaniam, Director and Head, Content, Amazon Prime Video, India said the team is thrilled to collaborate with Prithviraj again after films like "Cold Case" and "Kuruthi" for the streamer.

"Given its gripping plotline and compelling performances, I hope 'Bhramam' receives similar adulation from audiences and establishes a benchmark in the crime thriller genre starting 7th October," Subramaniam said in a statement.

Ajit Andhare, COO, Viacom18 Studios said "unusual scripts" cut across languages and the success of "Andhadhun" -- among the Hindi audience and even in China -- is a testament to that.

"Now seeing 'Andhadhun's Malayalam adaptation 'Bhramam' ready to release on Amazon Prime Video gives me great sense of satisfaction and anticipation as it's another opportunity for the film to weave its magic on a set of new audiences," he said.

Chandran, who is also a cinematographer on the film, said the team has aimed to take the scale of production a notch higher than the 2018 original, which was helmed by Sriram Raghavan.

"Some unique elements of drama and humour have been weaved in 'Bhramam' along with a heady punch of music that discerningly fits into the narrative.

"I am happy that we have managed to push the envelope further in terms of cinematography and have brought our creative vision to life with such a nuanced storyline and hopefully, along with a talented team, we have been able to put together a film that will leave the audiences thoroughly entertained," he said.

Sanjay Wadhwa, Managing Partner, AP International Group said the team is thrilled to have "Bhramam" as their maiden production.

"We are extremely fortunate to be able to associate with Amazon Prime Video to do so. There could not have been a more compelling story for us to remake - to tap into a larger audience than 'Andhadhun' already has," Wadhwa said.