Rajini and Kamal shared a platform while celebrating Kamal’s 65th birthday and his 60 years in cinema. 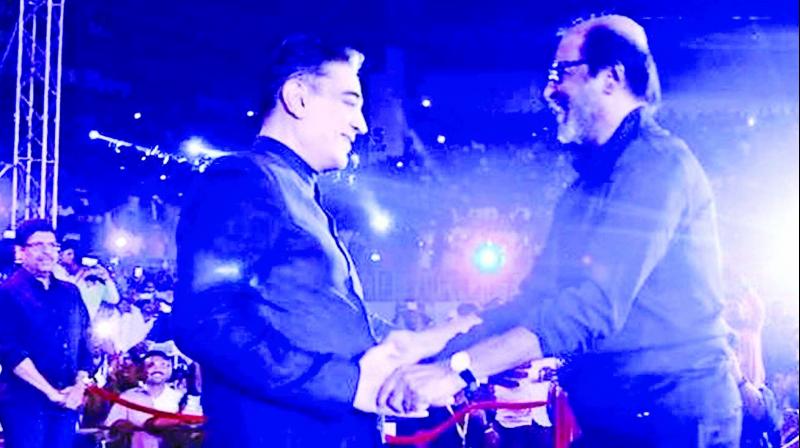 Kamal Haasan’s birthday Ungal Naan concert with Ilayaraja proved to be quite the political platform for not just the Ulaganayagan but also many other film voices that contoured their conversations with political innuendo.

A packed stadium pulsating with applause every time the great leader Anna was referred to also thundered with applause when Rajinikanth made a rather sarcastic remark about Chief Minister Edappadi Palaniswamy. The Superstar also stayed throughout the event to show his camaraderie with Ulaganayagan.

Rajini revealed, “It is impossible for anyone in cinema to display multiple talents like Kamal Haasan. 60 years in cinema is not an easy thing. I know he had faced hard times and made lots of sacrifices. As a conductor even I have had tough times, but those were nothing compared to Kamal’s.”

Talking about their friendship, the Darbar star said, “Often Kamal faces this issue of people saying that they don’t understand his words, which he expresses after careful research. But, one who’s sleeping can be woken, but we can’t wake up those who pretend to sleep. While this Rajini himself can understand, why can’t others? No one can break our friendship and don’t use our names to create a fight. I want our fans also to preserve this and shun away from negativity and spread love."

The actor signed off with a political touch. “Two years back, Edappadi Palanisamy would not have dreamt of becoming the Chief Minister and people thought his government will tumble in four months. But a miracle happened. It happened yesterday, it happens today and a miracle will happen in the future too!” Perhaps, implying how even Kamal Haasan can one day sit on the CM’s chair.

Vijay Sethupathi went a step further in virtually endorsing Kamal Haasan as the CM-in-waiting. Speaking at ‘Kamal 60’, Vijay Sethupathi, in his inimitable style, stated that he welcomes his elder’s entry into politics. He added that he loved the very name of Kamal’s party Makkal Neethi Maiam, which highlights that everyone from various backdrops, can come together.  The Makkal Selvan pointed out that for six decades the Ulaganayagan never disappointed the audience in cinema and hopes he will not in politics too. “He will be a great leader.” This apparently led his fans to believe that VSP is canvassing for Kamal.

Though Vijay could not attend Ungal Naan event, he had sent a message through dad S.A. Chandrasekhar who read it out.  Speaking at the occasion SAC praised Kamal for entering politics and said that he knew Rajini would soon follow suit.

“Kamal and Rajini will make it big in politics is a known secret. Instead of attempting to serve people individually, why can’t they unite and give clean and good governance and bring about a change.”

His last remark that Rajini and Kamal should give way to their Thambis(brothers) in politics created quite a buzz among the audiences and some of them as well as netizens felt that SAC meant his son  Vijay’s political aspiration.

While Shruti Haasan cheered her father, Akshara was intently watching on as actors Sivakumar, Vadivelu and Nasser processed in all the political talk.

Many wondered (though anticipated) how this entertaining evening fast turned into a full-blown political platform.