Demonetisation and its cheap thrills

While not everybody is cheering for Modi’s big monies move, some of them are being very vocal about their dissent — albeit in style. 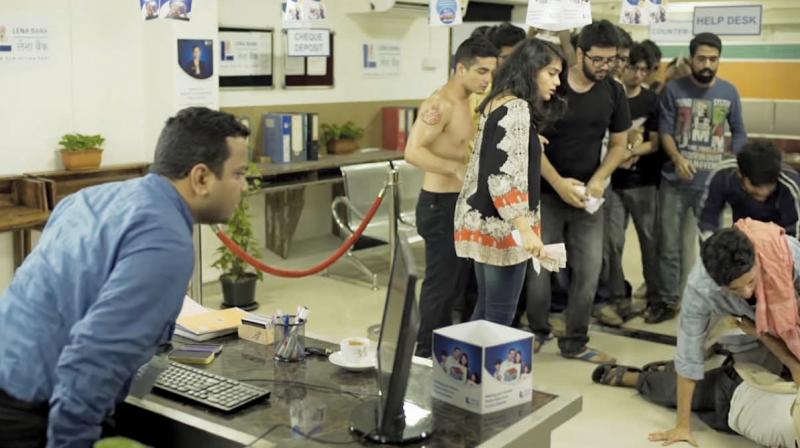 A still from the AIB video

A month down the line, demonetisation has garnered a few supporters and many dissenters. But a certain kind of the latter mentioned category in particular have caught our attention. While many are strongly condemning the move, a few creative minds are employing fun ways to draw attention to the woes. Think comedians, musicians and writers. Take Sufi rock band Alif for instance, which came up with a new single this Tuesday—Rupaiya. The song takes an indirect hit at demonetisation and how it is ultimately the poor who are suffering. Or AIB’s parody where all those supporting the move resort to dropping the ‘s’ word — soldier.

Each stanza of the song ends with the ironic question “yeh quissa kya hai yaar?”

“We wanted to take a dig at demonetisation, while still coming up with something that will be relevant ten years from now. While it is a fun satire about how everything is about money nowadays, we definitely had demonetisation in mind when we released it,” says Mohammed Muneem, Alif’s lead singer. For instance, the line “garib garib hi rahe” (the poor remain poor), is intended to show the plight of the poorer sections of society and those who are languishing in long lines. “The whole idea of a cashless economy depends so much on smart phones and ultimately it is the poorer sections who suffer. I haven’t seen any people pulling up in their Mercedes cars to stand in lines outside banks,” Muneem adds. 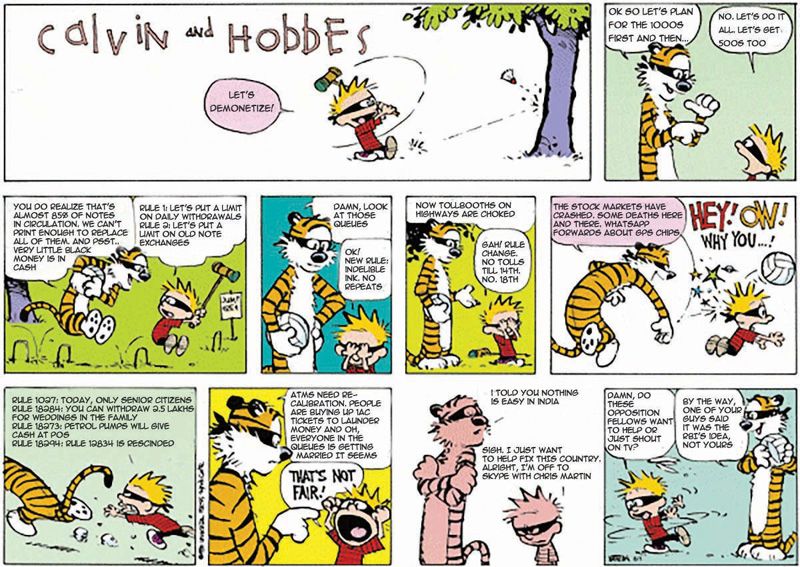 While Ailf’s song is on the more universal theme of money and exploitation with an underlying dig at the move, a video which Mumbai-based comedy group AIB has come up with on the topic is an out and out critique that shows the rigmarole around demonetisation as a farce. “When demonetisation first happened, we knew that we would have to do something around it, and ultimately we came up with a video, which holds up a mirror and shows you everything that is wrong with this move,” says Girish Narayandass, who wrote and acted in the video. “There are so many ridiculous arguments in favour of demonetisation, like people saying that you can stand in cues for reality shows but not for the country—it’s ridiculous to even compare the two. While we can’t tell what the result of demonetisation will ultimately be, we can definitely see the negative impact it is having in the here and now. We spoke to our families, friends, household help, people on the streets—and this is a portrayal of their varied views,” he adds.

According AIB comedian Tanmay Bhat, who directed the video, one of the most ridiculous arguments surrounding demonetisation is that everyone thinks some rich person is suffering due to this move. “It’s this blind hope that someone rich somewhere else is suffering more than I am and that makes this effort worth it. Not everyone is saying it, but we’re all thinking it,” he explains.

Another direct satirical take on demonetisation, which has been taking social media by storm, is Krish Ashok’s reworked Calvin and Hobbes comics. The IT professional has changed the dialogues in the strips so that everyone’s favourite tiger and kid duo can be seen giving advice about demonetisation. For instance, in one of the tweets, he has used Calvin ball, a game where Calvin keeps changing the rules. He has then juxtaposed his own dialogues so that Calvin can be heard saying things like, “Let’s demonetise!”, “New rule: Indelible ink. No repeats” and “Gah! Rule change. No tolls till 14th, no 18th.” In another strip, he has Calvin ‘mansplaining’ the concept to Susie, and in yet another one, he compares the demonetisation woes to the Supreme Court’s ruling on the national anthem.

While the reaction to these sarcastic and creative takes on demonetisation has mostly been positive, there are dissenters there as well. For instance, Krish’s comics have been called “pure genius” by comedian Karan Talwar, while Prem Panicker tweeted that Krish “does Calvin better than Bill Waterson.” However, there are those who didn’t want their childhood hero dragged into modern day politics.

The AIB video, too, had its share of mixed responses. “The overwhelming response was ‘thank God someone said it,’” says Tanmay, adding, “Of course there were also people who disagreed — some said we’ve been paid by Arvind Kejriwal, some said it’s one sided, some said we should respect the prime minister. It’s just par for the course for us, though.”