Despite controversies and boycott calls, several big names from Bollywood are attending the International Film Festival at Goa. 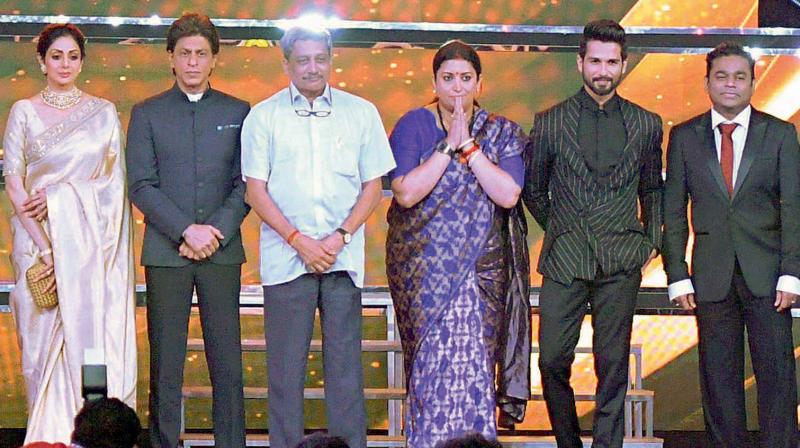 Bollywood actors and filmmakers are not shying away from the controversial International Film Festival of India (IFFI) at Goa, despite a call for ban to show solidarity. Controversies such as the exclusion of films like Sexy Durga (which was later reinstated by the court) and Nude and the ongoing Padmavati controversy ought to have given filmmakers and actors a signal to not pay heed to government diktats and boycott the festival.

Also, despite clarion calls from personalities like Shabana Azmi — who was one of the staunchest advocates in 2005 for the Film Festival to be shifted to Goa — every big and small actor and star has decided to use the platform to promote their films.

Take for example, Amitabh Bachchan, who has decided to accept an award, which Rajinikanth will present. Shahid Kapoor was there for the inauguration and to see his brother Ishaan’s debut film, Beyond The Clouds. Ishaan, his Dhadak co-star Jhanvi Kapoor and her mom Sridevi were also present.

Shah Rukh Khan inaugurated the festival and filmmakers Madhur Bhandarkar, Sudhir Mishra, Nikhil Advani and Subhash Ghai have all been spotted at the festival, doing multiple meetings and moving around with the powers that be.

“The stakes are too high. There are many small and big filmmakers here, and they have to move ahead with their projects. It is very unfortunate that the industry is not together, but what is the choice,” says Executive Producer Prashen Kushal, who has brought his film Rakkosh starring Sanjay Mishra to the festival.

“The actors from the film industry are soft targets anyway. What guarantee can anyone take for their safety if they boycott the festival? I’m an actor too and I want safety as a priority.  Boycotting the festival at the last moment is not a solution,” says actor-writer-director Dinesh Lamba.

While many independent filmmakers across the country use IFFI as a platform to showcase, promote and market their films and cannot boycott the festival, the stars do have a choice. “No one wants their head or their nose cut today. It’s very easy to ask a question, but for the stars, it is a tough ask,” says a trade source.