The complexity and benefits of collaborations in the world of art. 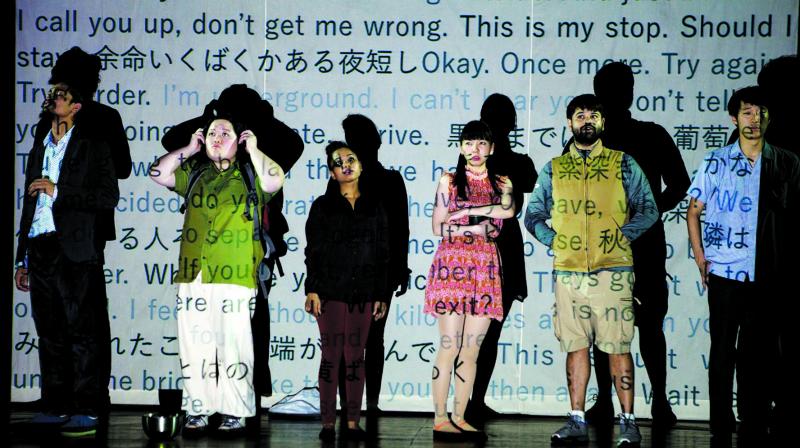 Stills from the play Will Only Take Several Minutes, which will be performed at art hub of Mumbai, Sitara Studio.

A very interesting show called This Will Only Take Several Minutes will be performed at the edgy art hub of Mumbai, Sitara Studio. The show is unique because it is a collaborative effort between Indian and Japanese artists. “Collaboration” is a tricky word within the arts community. It often implies people coming together to work on equal footing. Musical collaborations are most frequent, and thanks to Coke Studio and Dewarists, we’ve seen numerous successful ones. Admittedly, there have also been some others that are simply glorified ‘jam’ sessions.

Essentially, collaboration has two parts. First is working styles. Particularly in India, where it is normally a ‘top-down’ approach to creation, the word collaboration denotes a different working environment; one of parity between each of the contributing partners. The second is that it usually implies people working together, who ordinarily wouldn’t. This could be cross-disciplined (painters with dancers), cross-genre (folk and rock musicians), or even cross-cultural (across international boundaries).

Within the performing arts, for some reason, collaboration usually implies an international component. Astad Deboo, for example, has spent his entire career collaborating with numerous international choreographers, dancers and musicians to create works that merge different traditions of dance and music.

Indian theatre seems to be very popular on the ‘collaboration’ scale right now. Numerous countries have offered grants and incentives to partner with Indian companies and jointly create work that resonates in both countries. Perhaps because 2017 is our 70th year of Independence, and an arts project is an easy way to raise their own national profile in India.

Recently, there was the very exciting project based around Kiran Nagarkar’s God’s Little Soldier that brought German and Indian actors together, exposing them to each others’ styles of creating theatre work. Nirbhaya was a seminal production created with Indian actors and a South African writer/director and a British production company exploring sexual violence. Curve Theatre, UK is looking at collaborating with an Indian playwright and acting company for their new project based on another novel.

However, the biggest myth about collaboration, I have found, is the “We all lead together” notion. When creating an art project (and I assume any project) building by committee is a guarantee for compromised and boring work. This often leads to either very toxic or very polite working rooms. In both cases, each person plays to their ‘safe’ zones and doesn’t really push himself or herself, which defeats the purpose of collaborations — which is to excite artists with new stimuli.

How the collaboration has changed the way they work, and the lasting contribution of a collaborative exercise is felt long after the particular project has closed. So even though the God’s Little Soldier project didn’t ever become a full-fledged production, the exposure to different working styles helped both nationalities of actors in their own artistic journeys. Judging by the first three months, we can look forward to many such collaborative projects in 2017.

The writer is a Bombay-based theatre-holic. He works primarily as a theatre-director for arts management company QTP, who also manage the youth theatre movement Thespo.