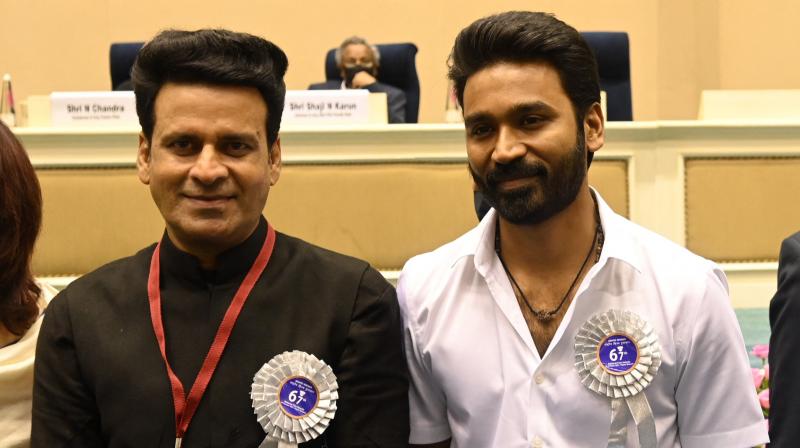 New Delhi: Actors Manoj Bajpayee and Dhanush were conferred with the Best Actor Award for their films 'Bhonsle' and 'Asuran' respectively at the 67th National Film Awards, which took place on Monday.

Actor Dhanush received the Best Actor Award for his role in 'Asuran', which also won the Best Tamil Film award. It's a period action drama film written and directed by Vetrimaaran, based on Poomani's novel 'Vekkai'. The film's plot was influenced by the real-life Kilvenmani massacre that occurred in 1968.

At the ceremony, Dhanush was joined by Aishwarya R Dhanush, his wife and superstar Rajinikanth's daughter. Rajinikanth was also conferred with the Dadasaheb Phalke Award for his remarkable contribution to cinema.

Manoj Bajpayee, who has previously won the National Film Award twice, Best Supporting Actor in 'Satya', and Special Jury Award for his feature film 'Pinjar', was felicitated at the in-person ceremony for his performance in the Devashish Makhija directorial 'Bhonsle'.

The movie saw the 'Family Man' star portraying the titular character who is a retired policeman and is living a non-interfering life in a colony dominated by locals, diagnosed with stage 4 brain tumour.

Manoj, who was dressed in a black shirt and trousers for the award ceremony, spoke about receiving the award and said, "The National Award for 'Bhonsle' means a lot because this was a film which we wanted to make but we were not getting money from anyone to make it, it took us four years to make this film, so definitely it means the world to all of us. It's kind of a poetic justice that has happened to 'Bhonsle' and I share this award with the director and the entire team."

"This is my third National Award and every time I went there it always takes me back to my first one when I got it for 'Satya', so it's a great moment when you are honoured for films which are very close to your heart," the actor added.

One of the country's most eminent awards in entertainment, the 67th version of the National Film Awards, which were handed out to the awardees by Vice President Venkaiah Naidu, was initially going to be held in May last year but had to be delayed due to the COVID pandemic.