Notice slapped for lighting up

They have been told to remove such posters, teasers, trailers and videos of smoking scenes within seven days of the issue of notice. 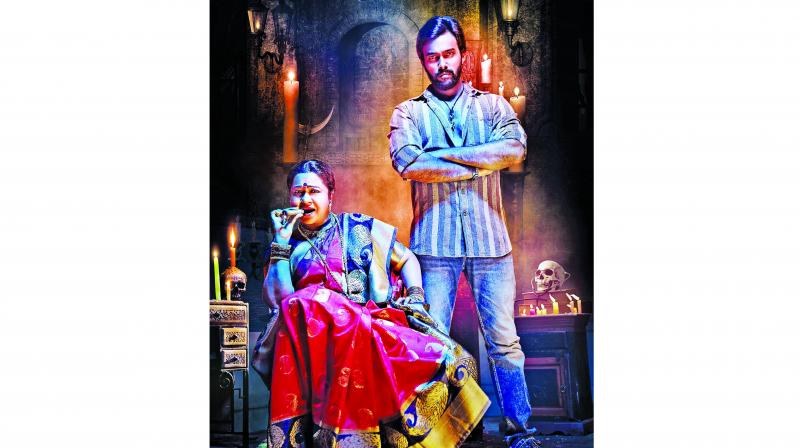 Actors Radikaa Sarathkumar and Dhruv Vikram have been served government notice for glorifying smoking in their promo posters and teasers of their films Market Raja MBBS and Adithya Varma .

Actors Radikaa Sarathkumar and Dhruv Vikram have been served government notice for glorifying smoking in their promo posters and teasers of their films Market Raja MBBS and Adithya Varma . The Directorate of Public Health and Preventive Medicine, Chennai, has issued a notice saying that it is an offence according to Section 5 and 22 of COTPA (Cigarettes and Other Tobacco Products Act) and asked the makers for explanation. They have been told to remove such posters, teasers, trailers and videos of smoking scenes within seven days of the issue of notice.

One may recall Rajinikanth and Vijay have openly stated that they would never feature a smoking scene after both drew flak from politicians and self-proclaimed patrons of moral policing. Sivakarthikeyan had said that he deliberately avoided onscreen smoking in all his flicks.

“What’s the use of warning them to remove the scene or slapping notice on them after the films have garnered huge publicity with their promo materials?” asks producer Karthik Gangadharan. He adds, “This is something new. There’s already the Censor Board that awards ‘A’ or ‘U/A’ certification depending upon the excessive smoking, alcohol consumption and other explicit scenes in a film. A statutory warning of ‘Cigarette smoking causes cancer and it kills’ is mandatorily displayed at the bottom of the screen during the period of display of the tobacco products or their use in the film.”

Speaking to DC,  Dr G.R. Ravindranath, general secretary to Doctors Association for Social Equality,  feels that it is imperative to follow government rules. “Yes, displaying smoking scenes of film posters in public places like roads, streets and other areas is not correct. Similarly, promoting such scenes in public domains like YouTube is not advisable. It is better these filmmakers do something about hiding such acts on already pasted posters and refrain from doing it in future.

All the same, I am not for fully banning smoking or drinking from films. It curtails creative freedom of a director.

If they need to show the bad traits of a character, they have to portray him/her consuming alcohol and smoking. The current practice of ‘statutory warning’ should suffice.”

Echoing similar views,  senior writer and film historian Sura opines, “I won’t agree that youngsters get spoilt seeing their matinee idols smoking or drinking alcohol. And as it is the censors are there to give them guidelines for reducing the so-called bad impact. If there’s a baddie, how else will a writer/filmmaker project him?  So, it is the character that warrants such scenes.”

Giving out an example, Sura adds, “Legendary Sivaji Ganesan has portrayed several characters where he was shown smoking cigarette/cigar in a stylish manner. That did not affect his huge fan followers. Instead, they use to enjoy and admire his act. But the take away from his films were family bonding, values and other good traits.”

When DC contacted Saran, the director of Market Raja MBBS, he said he and his producer Mohan have already taken measures to hide cigars from the posters by plastering a white X mark on it.  “I didn’t get any notice from the public health directorate. Radikaa has forwarded it to me.  It was Radikaa’s character Sundhari Bhai, a don from North Chennai, who controls the area (Perambur), which commanded such smoking act and nothing was forced to attract attention. It is a creator’s freedom and I am showing only what is prevailing in society.  Also we carry the anti-tobacco statutory warning each time a smoking scene appears.”

However, he says, he is also a socially responsible person who wants to adhere to government rules. “That’s the reason we had masked the cigar portions of posters, already printed (see pic).  This online rule to prevent smoking act is something new to us. By now, many would have downloaded the teaser and trailer of Market Raja MBBS. If guidelines for OTT platforms are given, it would be easy for us to follow that.”

For Adithya Varma, the Tamil remake of Arjun Reddy controversy seems to have come from the other way. The violent misogynist behavior of the lead character played by Dhruv Vikram didn’t come under criticism strangely. Dhruv was served government notice for the posters of him smoking cigarette in AV that adorn the walls of Chennai.

Director Gireesaaya tells DC, “Adithya Varma is a remake of blockbuster Telugu film Arjun Reddy which was also remade as Kabir Singh in Bollywood. So, it is just I followed the same story choosing Dhruv Vikram as the lead protagonist for Tamil. To portray the character who has anger management issues, we have shown him smoking and drinking. We are not aware of these new government rules. If the government says that such poster on walls and online promos are to be removed, we will see what best can be done and obey their rules. We will also be careful in future.”