While multiplexes have changed the way we watch movies, cinemas like Alfred Talkies offer you an old-school experience. 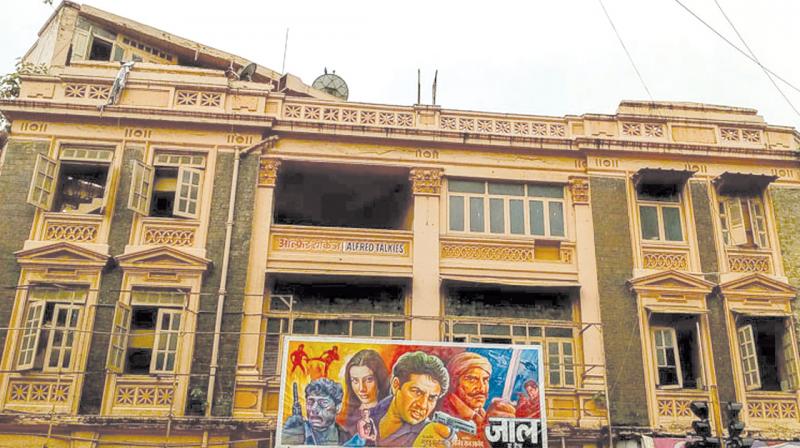 I walk eastwards, down Grant Road’s Frere Bridge, along Maulana Shaukat Ali road. The footpath has been borrowed by shacks festooned with lurid poster collages of films on no-one’s must-watch list. Each houses a desktop computer that is a vault of B-grade Hindi movies and Bhojpuri blockbusters transferable to my cellphone for a pittance. It is a fitting approach to the city’s oldest entertainment hub: Play House.

Squeezed between respectable Khetwadi and iffy Kamathipura, this is where the British built their game clubs or “play-houses”. Formerly the crucible of Parsi plays and Marathi tamasha, it is now a district crowded with once-reputable single-screen theatres. Their boxy, unremarkable structures feature the best of dubbed films and reruns: Icchadari at Super Plaza, Bahaniya at Shalimar, Rowdy Hero at Gulshan, Jil Ka Toofan at Nishat, Dulhan Chaahi Pakistan Se at Royal and Gair at New Roshan.

Alfred Talkies stands apart. Its distinctly European architecture occupies pride of place at a busy intersection, painted in what hopeless artists call “skin colour”. Constructed in 1880 as the Ripon, it was amongst the first to stage plays in local languages. Reborn in the Hollywood-crazy ’30s as the Alfred, it retains its original architecture, complete with brown balustrades and wrought iron framework supporting stained glass murals above the entrance.

The banner for today’s film – Jaal: The Trap – is hand-painted and adorns Alfred’s front facade. At 5:30 pm, brooding men sip doses of chai outside its closed gates. At 5:45, a chana vendor sets up shop and begins chopping onions. A young woman wraps herself around a much older man. Although deliberately underdressed, I still attract stares.

The gates open and a man dressed as a bouncer calls out gruffly: “Beeswala! Paccheeswala!” I buy my ticket from a box-office the size of a bathroom. Twenty rupees for a stall seat, 11 of which go toward taxes. A sign in Hindi and Urdu clarifies that if the show stops due to a power cut, the ticket money will not be refunded. Cigarette smoke fills the foyer. I can hear the closing dialogues of the last show through the vents above the doors. The poster boys here are Ajay Devgn before he dropped the “a” and Suniel Shetty before he added the “i”.

At six, the audience troops out and we file in. The screen is mounted above a semicircular stage under a stucco arch. Slippery metal seats are embedded in concrete. No two people sit next to one another. A sign warns me to beware of pickpockets. My neighbours are an obese lady in a capacious nightie with a tiny knot of grey hair at the back of her head and two young men who put their feet up and give each other relationship advice: “Usko chhod, doosri pataa le” (“leave her, woo another one”). A cat brushes past my leg and nibbles on a discarded chapati.

After a bewildering show-reel of Nargis Dutt’s career, the national anthem begins. Everyone stands, no one at attention. When the flag appears on screen, people cheer. I have never watched a movie like this, or like this. The film features Sunny Deol, Tabu, bikes, biceps, car chases, boat chases, train chases, ski chases, oversexed women, objectified women, pelvic thrusts, hamming villains, mansions, Simla and Kashmir. The first song is a hero-introducing military-Bharatnatyam mashup staged at a rock concert that mentions Mother Teresa and Maharana Pratap in its lyrics; the audience claps and sings along. There is no surround sound. Anand Raj Anand sounds throttled.

At the interval, people thrust their hands through the locked gates to buy omelette pao from vendors in the street. During the third song, some leave for a bathroom break. The video has that crackly, streaked quality you associate with old movies. The man sitting behind me offers the hero expletive-laced advice. The projectionist skips the scenes he considers unimportant to the plot.

I’m having a blast. My feet tap to senseless songs. My ears have been gladdened by Amrish Puri’s baritone after so long. When the twist in the tale unfolds, I gasp. No one else does. They’ve seen this before.

After two and a half hours, the credits are abruptly terminated, and three steps later we find ourselves out on the street.

Usually, I watch a movie in a theatre. Today, I saw a “fillam” at the cinema.