Screenwriter Anjum Rajabali talks about the process of screenwriting and how in the creative world, there is hope and scope for everyone. 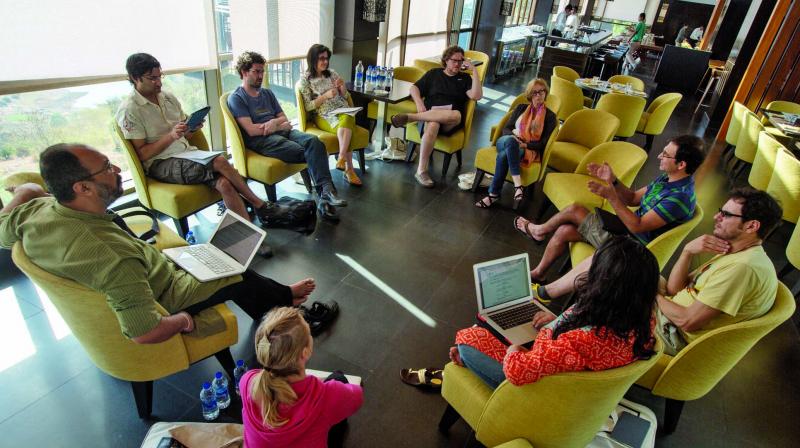 File photo of Anjum at a Script Lab session

For the past 25 years, Anjum Rajabali has been writing films. His body of work (including Drohkaal, The Legend of Bhagat Singh and Rajneeti) would point towards the socio-political undertone that these films carry. But ahead of a screenwriting workshop starting from March 1, Anjum is in despair for the overall lackadaisical attitude of Hindi film industry. “The Hindi film industry is fairly divided and it’s sad that what we consider to be an artistic community, which should be at the pursuit of truth, is somehow losing the plot,” he rues. This, he says is also because of the producers who are not ready to take risks and therefore thwart the “critical brave voices with fearless vision”. The problem, he says, is that too much is at stake due to the pressure of “pleasing the people”. “Art is not about pleasing people. If that were the case, there wouldn’t be ‘tragedies’,” he adds.

Anjum has been associated with film schools such as Film and Television Institute and Whistling Woods, where he has taught screenwriting. He has also mentored at NFDC’s Scriptwriter’s Lab. His close association with the newer generation of writers has helped him gauge the turn that Indian cinema could possibly take in the future.

Although he finds “honesty” in personal stories, he points out that the larger issues and politics often remain unnoticed. “There’s a dearth of thorough understanding of politics and culture in our films. The themes are often depoliticised and perspectives are narrow,” he says.

But it is the fine balance of the personal and the political that can truly stand out as universal content. “Look at the Beatles, taking all things into consideration, look at the songs; they were actually responding to the situations outside. Give peace a chance… you know. What are we even talking about?” he remarks.

Closer home, he cites filmmakers such as Guru Dutt, Bimal Roy and the filmmakers from Parallel Cinema movement in India, who were a tool of social inquiry. But he laments that at present, writers and filmmakers are moving away from such themes.

“As writers, artistes and filmmakers, one must point the torch at the uncomfortable corners of the society. Even our epics did that,” he points out.

His eyes he says, will be on the younger writers, who he would encourage to explore various topics. He also wants to help them express their stories more cinematically. “After all, one is writing for cinema and if one writes badly, the film cannot stand simply on the novelty factor. The key is always to have a good script,” he states.

Trained as a clinical psychologist, Anjum came to Mumbai in 1982. After seven years of working in the city, he felt a sense of ‘emptiness’ and eventually, wrote his first script. Psychology, he says, has somehow helped him to understand how deep and complex characters can be. As someone who has been working in the industry for more than two decades now, he says his work is too less. “In this period I should have had ideally had at least 30-40 films, but I have written only ten. And the sad part is seven of them are box office failures,” he says, matter-of-factly. He has recently finished writing a biopic on astronaut Rakesh Sharma. “The fact that I still remain standing for more work despite my commercial failures should send the message out that there is hope for everyone. One must not get discouraged, but study the elaborate process of screenwriting,” he concludes.

Anjum will conduct a workshop on screenwriting from March 1 - 5, 10 am to 5 pm, At Whistling Woods, Film City, Goregaon (East)