Several Tollywood stars took to Twitter to express their shock and grief, conveying their condolences to the family. 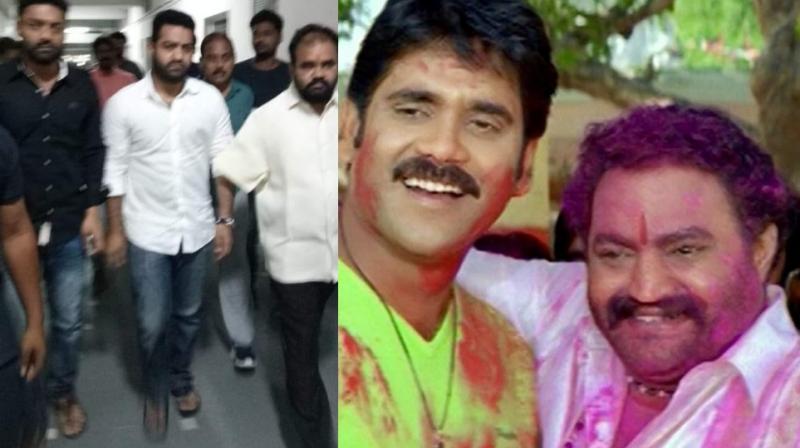 Jr NTR and Kalyanaram in hospital; Nandamuri Harikrishna with Nagarjuna in ‘Seetharama Raju.’

Hyderabad: The untimely demise of Nandamuri Harikrishna in a car accident early on Wednesday has shocked the Telugu film fraternity.

His sons, both popular actors, Taraka aka Jr NTR and KalyanRam were seen at the Kamineni hospital in Narkatpally, in pictures that were shared by fan clubs on Twitter.

Nagarjuna, who turned a year older on Wednesday, shared a still from ‘Seetharama Raju’, one of the late actor-politician’s famous films.

In his part-Telugu and part-English tweet, Nagarjuna shared grief of his 'void' and revealed how Harikrishna asked his ‘younger brother’ to catch up soon as they hadn’t met for long.

His sons Ram Charan and Akhil Akkineni and other stars from Tollywood, like Mahesh Babu, Allu Arjun, Allu Sirish, Rana Daggubati, Nani, Kajal Aggarwal, Rakul Preet Singh, Gautami, Varun Tej, Sai Dharam Tej, Lakshmi Manchu, Adivi Sesh, Mohan Babu, and many others poured their hearts out about being saddened and shocked on hearing the news and lent solidarity to the family, offering prayers for the departed soul to rest in peace.

Deepest condolences to the Nandamuri family. To my brother @tarak9999 ! Can’t imagine what they are going through. Strength to the whole family. May his soul rest in peace. #NandamuriHarikrishna pic.twitter.com/4IOgFDbdGt

Deeply saddened by the news of Harikrishna garu's untimely demise. May his soul rest in peace. Strength and love to my brother @tarak9999 and his entire family in this time of grief.

I am out of country & just Heard the Bad ! Very very shocking ... Heartfelt Condolences to the entire Nandamuri Family , Near & Dear ones . @NANDAMURIKALYAN & @tarak9999 . Condolence Brother . RIP ! #RIPHarikrishnaGaru pic.twitter.com/7pXUIaGj47

#RIPHariKrishnaGaru gone too soon. Love and strength to his entire family in these terrible times. #Tarak #KalyanRam stay strong my brothers.

Shocked to know about the sudden demise of Harikrishna gaaru ..never got to meet him in person but it feels like I always knew him. My deepest condolences and strength to the family. This is really sad.
Rest in peace Sir

Really sorry to hear the news.
Strength to Tarak, Kalyan Ram and the family to withstand this tragic moment. Rest in peace Harikrishna garu.

Shocked to hear about Sri Harikrishna garu’s demise in a tragic road accident !! He shall always be fondly remembered ! Strength to the family ! RIP sir ..

Shocked at the tragic passing of Shri Nandamuri Harikrishna garu. My deepest condolences to his family & loved ones and may God give them strength to face this loss. I offer my prayers for his soul to Rest in Peace

Sudden demise of Harikrishna garu is really shocking.
Strength and courage to his family to bear this loss.
My heart felt condolences..

My deepest condolences to the family...May your soul Rest in Peace #HariKrishna Garu pic.twitter.com/UimIvnjiwx

Just not fair. This is shocking. My deepest condolences to the family. May his beautiful soul RIP. We loved him dearly. #Harikrishna pic.twitter.com/86IqiQvWnr

I lost my brother Nandamuri HariKrishna today. There is nothing I can say more. A great loss.

Nandamuri Harikrishna, who would’ve turned 62 in September, was driving his car on the Nalgonda Highway around 6.30 am when it hit the divider and flipped over, causing severe head and chest injuries.

He was mainly known for his work as politician, playing a part in the Telugu Desam Party (TDP) coup in the ‘90s and has also held positions of Member of Parliament and also the minister portfolio in brother-in-law and current Andhra Pradesh Chief Minister Chandrababu Naidu’s government then.