Living with Osteogeneris: No challenge is too big for Parikshit Shah

It was she who instilled in Parikshit an iron will, and strong determination to surpass all odds. 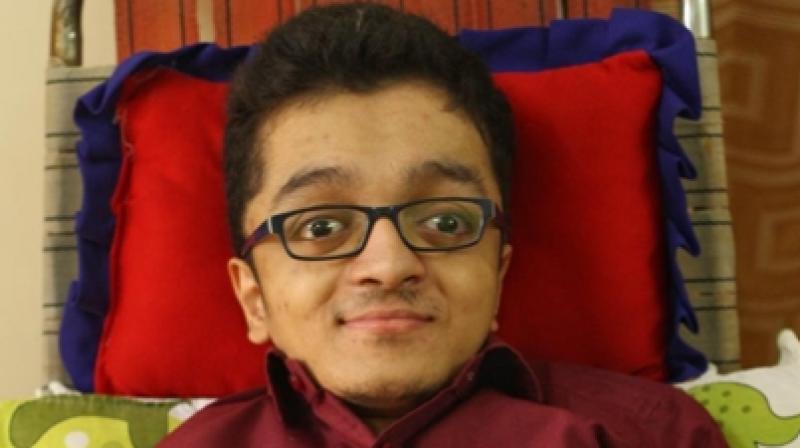 For 25-year-old Parikshit Shah, Osteogenesis imperfect—also called the brittle bone disease—has never been a limitation in pursuing his dreams. Due to the very rare condition, of which there are fewer than 100 thousand cases per year in India, Parikshit’s movements and growth and confined.

Having lost his father at the tender age of eight, he was brought up by his mother, Vijayaben. It was she who instilled in Parikshit an iron will, and strong determination to surpass all odds.

Take, for instance, how he has never let his condition jeopardise his academics.
For most of his life, he has taken exams lying down. At times, he even refused to take the help of a writer to finish his exams, though he was perfectly eligible for the same. Parikshit can boast of an academic record that not many can. Eighty per cent marks in the SSC. Seventy-five per cent marks in the HSC exams. A B. Com degree from the The University of Mumbai with a score of 75%. An MA in Economics from Pune University. No mean feat!

Parikshit has also recently cleared the entrance exam for PhD (Doctor of Philosophy) on 'Micro Economics in Urban Development'. For someone who was rejected by multiple schools for admission, what Parikshit has achieved academically is phenomenal. And, it is not just about proving the doubters wrong, but also about the way he looks at life.

This positive approach, the never-say-die attitude is infectious and hard to ignore.

So, what does Parikshit have on his plate now?

Though he has plans to pursue his PhD at some point of time, right now all his focus is on his start-up Eerlik Media. He is burning the midnight oil, literally, to build his company in the field of internet and social media marketing and digital branding. His love for the internet is not new, and he utilised the power of the medium to land his first online job when he was just 21. He realised how potent the power of social media, internet marketing and digital branding were. Soon, Parikshit decided to make it a venture and explore how he could leverage it to grow his business.

He now works with different clients from diverse fields and helps them in cementing their digital presence. The challenges are now different. Sometimes, people judge by appearances and not by the strength of his ideas and efficiency of implementation. Parikshit’s antidote to such pre-mature judgment is patience and sheer grit. He disarms people with his confidence, and eventually, they learn to see him for what he is—a hard-working, highly qualified entrepreneur!

Another challenge is how limited mobility also limits new opportunities at times. How getting things done takes longer. But Parikshit is working hard to find answers to these questions as well.

Lastly, what is Parikshit’s message to the youth?

Expand your horizons, seek out more opportunities, upgrade your skills, and don’t be afraid to experiment, he says! On a final note, he urges the youth to not look down upon any work, as there is always something new to be learnt, along the way.