Among the cast, it’s a team effort with everyone working together in harmony to get the job done to great effect. 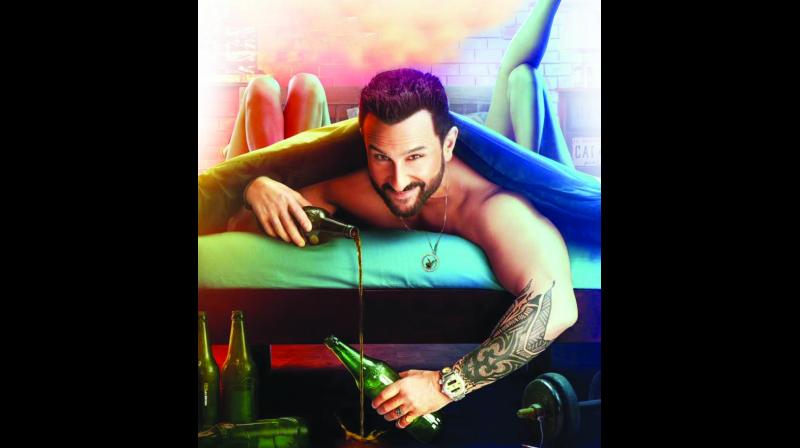 The film that is a remake of an Argentinian film Igualita a mi is warmly touching as it deals with a man who refuses to grow up, and instead, loves life to the hilt as a single life that is more of a prolonged adolescence.
Rating:

How would a 40-year-old bachelor react when he comes to know that, as luck would have it, he could not only be a “father”, but also a “grand dad”? Saif Ali Khan, who seems to be having a lot of fun playing characters these days (Tanhaji, Lal Kaptaan, Chef, Kalakandi, or even Sacred Games), plays a Casanova in Nitin Kakkar’s hilariously funny Jawaani Jaaneman, who is suddenly forced to deal with a young girl’s (presumably his daughter’s) pregnancy. A difficult situation, for sure. But that his pleasure-seeking lifestyle would get severely affected is the least of his worries: what hits him most is when this girl suggests that he could be a “grandfather” as well.

Jassie Singh or Jazz (Saif Ali Khan) lives in London with his family. Though things are not too bad for him as his full-time job as a real-estate agent seems promising, all the more because a grand multi-million deal would lead to his raking it in, his brother Dimpy (Kumud Mishra) worries about his care-two-hoots attitude. His mother (Farida Jalal) too insists that he reassess his goals and behaviour. But Jazz remains unperturbed, and spends his time partying at pubs. The only time he pours his heart out is when he goes to his hairdresser friend Rhea (Kubra Sait) who makes sure he dyes his hair to look younger. When the unexpected emergence of an unwanted guest Tia (Alaya F), whom he eyes at the pub and begins to flirt with, threatens to upset the life of this aging playboy, he doesn’t realise there’s more in store for him. Tia shares her predicament of coming all the way from Amsterdam to look for her biological father she has never seen, and soon, moves in with him in his apartment. An enraged Jazz is not too happy about her opportunistic and almost parasitic ways, and he gets the shock of his life when she tells him that he could be her father. To make matters worse, he is further shocked out of his wits when he discovers that she could also be pregnant.

Such an utterly charming plot could only be a joyride if the writing is in its place. The film that is a remake of an Argentinian film Igualita a mi is warmly touching as it deals with a man who refuses to grow up, and instead, loves life to the hilt as a single life that is more of a prolonged adolescence. His newfound fatherhood and grandfatherhood hits him like a ton of bricks, as he tries to deal with the abrupt change in his home. But there’s more to come: Tia’s mother Ananya (Tabu) and her boyfriend and the father of her unborn child Rohan (Dante Alexander) too, land up at Jazz’s home one day after completing a six-week workshop on meditation in Amsterdam.

Almost throughout the film, the screenplay and dialogue by Hussain Dalal and Abbas Dalal add their deft touch and manage to sustain the disorderly energy of the scenes. Kakkar and writers bring great laughs, as also spicy conversations that make the 119-minute film clever, silly, slick and fun. The gradual understanding of Indian families to move out of their shanty dwellings to bigger batter apartments serves as a subtext signifying the breezy lifestyle that the young aspire for. Save perhaps for the last few reels when forced sentimentality creeps into Jazz’s innermost soul for him to start valuing family and the ideals that are a must, the film fulfils the film’s key promise to milk for all its worth.

Among the cast, it’s a team effort with everyone working together in harmony to get the job done to great effect. Stopping at the right moments from turning the story sleazy, it remains well within the believable parameters of an amusing film that has in its heart a sharp commentary on bachelorhood and its wayward ways.

Saif is having a ball, and nails it with his insouciance and minimised and understated humour and expressions. Alaya F is a confident newcomer and acquits herself well in the presence of veteran actors. Tabu, post her critically acclaimed Andhadhun, is a delight once again). Kubra looks and acts the part she is expected to play with ease and self-assurance and conviction.

It’s great to see Hindi cinema giving its audience what they have been asking for — some real characters who are all out to have fun. And yes, that includes leading a debauched adult life too!