The makers attempt of making this film with an underlying issue of mysogyny is the saving grace of VDW. 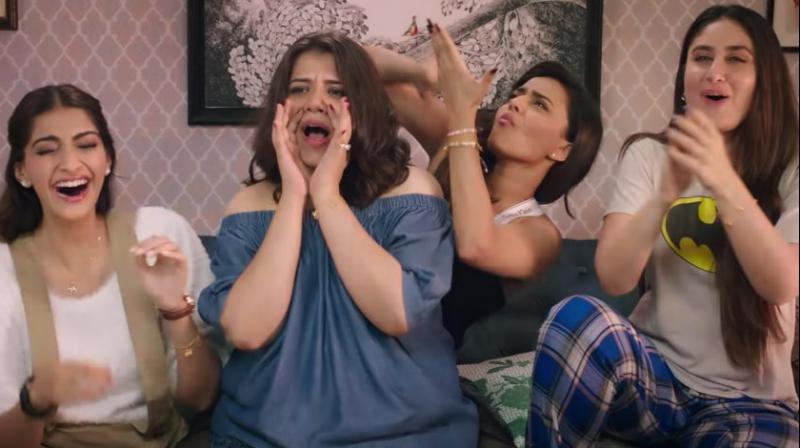 It could have been a powerful comment on gender equality. But Veere Di Wedding (VDW), lacking particularly in a sound plot, is not even a storm in a tea cup. Will I be murdered if I call it a chick flick? After all, the film has been promoted with the #IAmNotAChickFlick. Director Shashanka Ghosh, who earlier helmed a poor rip-off of Khoobsurat, tries too hard with this one.

Kalandi (Kareena Kapoor Khan), Avni (Sonam Kapoor Ahuja), Sakshi (Swara Bhasker) and Meera (Shikha Talsania) are childhood friends. Kalandi, brought up in a dysfunctional family, is in love with Rishabh (Sumeet Vyas) but not in a mood to get hitched. Avni, a divorce lawyer, is in search of her Mr Right. Sakshi, a London-based, free-spirited girl, is on the verge of getting divorced from her dominating husband. Meera, who hankers for the pleasures of the flesh, is busy raising her little toddler but is happily settled with her white husband John. Her Sikh family is not supportive of this marriage.

The four meet at Kalandi’s impending wedding. It focuses on the girls, at the forefront of Kalandi’s commitment phobia and the antics of her dysfunctional family.

The women are bold, they smoke, they drink, they are smart mouths and they swim (obviously in bikinis). This is absolutely fine.

But what comes out jarring is the director’s attempt to define the modern woman with these attributes alone. Surely these talented women could have been given a better plot, a panoply of substance where they can hammer out their joys, their fears, their grievances? And send out a message to others on how not to be anything, including apologetic.

Not to be, in VDW. What we get is a lot of male bashing, unapologetic.
So what do we have? The film is nicely shot, the girls look wonderful and some dialogues are really funny.

The film is not Pyaar Ka Punchnama (from the woman’s perspective), rather it's a woman version of Dil Chahata Hai or a Zindagi Na Milegi Dobara. The popular star cast might take the film to two tier cities but VDW is strictly cosmopolitan.
Swara and Shikha, of course, bag the best dialogues and they deliver them well too.

Kareena Kapoor Khan is free-flowing and lovely. One cannot blame the makers for giving her the cream of screen space.

Sonam Kapoor Ahuja is her usual herself, continuing her act from Aisha, I Hate Love Story or Khoobsurat. She looks pretty in designer clothes styled by her sister-cum-producer Rhea Kapoor and designers Sandeep Khosla and Abu Jani.
But Swara and Shikha are serious contenders for the viewers’ attention. They hold their own in the stellar cast.

Male lead Sumeet Vyas has potential. He is spontaneous, real and believable. Vivek Mushran, Manoj Pahwa, Neena Gupta are interesting fillers.
VDW is an easy, breezy, one-time watch. If you are a fan of happy and convenient endings, then this popcorn entertainment is your dose for the weekend.