Stree is smart, cool, funny, cuckoo and pulls off the ridiculousness of the genre quite brilliantly. 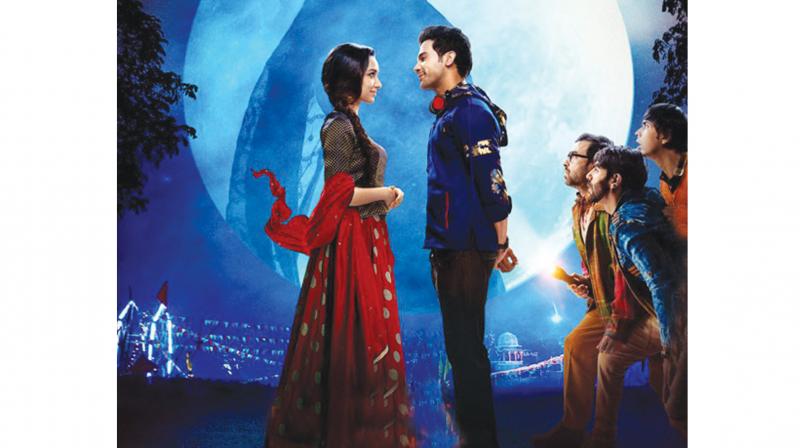 Still from the movie Stree
Rating:

Stree introduces itself as a film “based on a ridiculous phenomenon”. And so it is. The film, written by Raj & DK and directed by Amar Kaushik, is inspired by those folksy tales which have been repeatedly reiterating one line from a 17th century Restoration play — “Hell hath no fury like a woman scorned”, turning it into some kind of fetishised sex-horror fantasy.

These stories and scripts are, at the crux, misogynistic.

These tales have, over the ages, engaged the services of nagins and ladies who acquire a diabolic blood lust and dark superpowers after being coitus irritateus. They turn into bhootnis, chudails, pishachini who stalk a group, a family, a village, a town, a gender, seeking revenge.

The angry, pyaasi aatma and her badla create heightened fear and tension, and engage us because they make us wonder and worry about who will win as morally, the scales are tilted in favour of the original victim.

Stree takes this misogynistic genre, twists and twirls it and turns it upside-down, inside-out, while revising and correcting the regressive cacophony that has always surrounded it.

Its director writers — Raj & DK of Go Goa Gone fame and Happy Ending shame — bring disorder to the genre with humour and a wink, presenting it in a new avatar, and signing off with a long overdue apology.

The film opens at that particular time of the year when the town is putting up festoons and string lights and women are urgently getting new clothes stitched for a very popular four-day-long puja.

It’s also the time of the year when men are safest indoors, but only after a sign has been painted outside the main door of their homes — O Stree, kal aana (O Woman, come tomorrow).

These words, in bright red paint that has been infused with some crushed chamgadar (bat) bones and the essence of a creature’s magical mootra (pee), are enough to ward off Stree (Woman) who spends all year working up a healthy appetite, and then strikes Chanderi annually, at the time of the puja.

Vicky doesn’t believe in all this, and neither is he that keen on his Daddy’s blouse-petticoat business. This despite the fact that he is every Indian woman’s dream come true — Vicky can design and stitch a gorgeous lehenga in ikattis (31) minutes. And he has a superpower that makes women not just do a happy twirl for him, but blush while doing so.

So when a very pretty, light-eyed girl appears, with cloth tucked under her arms, and purrs, “Vickyji pleeeeejj”, because she needs a lehenga urgently, Vicky runs straight to his friends, grinning.

He reports the encounter to his two besties — Bittu (Aparshakti Khurrana) and Jainab (Abhishek Banerjee) — and shows them the arm that’s been gently pressed.

Bittu, who runs a store of readymade garments, isn’t impressed. But Jainab enjoys Vicky’s prem milan as only the bestest of best friends can. Even when she invites Vicky on a date, with the most vichitra shopping list, Jainab is very supportive, if a bit dim.

Meanwhile, Stree is on a hunting spree again. A boisterous boy’s party goes numb with fear when one of them gets taken and the leftovers try to figure why the “O Stree kal aana” message outside didn’t work.

Bittu and Jainab seek the advice of Rudra (Pankaj Tripathi) who runs a book store. He knows the four-step upaya of how to dodge Stree’s chungal (vice-like grip). But before he can finish, he gets a call from Shama.

Stree grabs another and then 20 of them together... Rudra steps up, and takes them all to the man who knows. It seems that there may be one person who can save the town from the aatank of the pissed off chudail — the son of a…

Stree uses all the tropes of vengeful nagin-bhootni films to tell its story, while drawing out and laughing at their idiocy, flaws, ironies and regressive politics.

Stree’s script, its characters, dialogue, direction and acting have that revisionist trait often found in college plays that are born out of ganja-induced, late-night bouts of hyper creativity. Mostly, those plays amount to little more than removing a spoke or two from a wheel but scream “I have invented a new wheel”.

This one, luckily, aced the morning-after test.

Stree is smart, cool, funny, cuckoo and pulls off the ridiculousness of the genre quite brilliantly.

The movie’s arc is conventional and has all the items required by commercial cinema to keep imbeciles awake and entertained — a pert bottom fills up the entire screen and wriggles in our face.

Apart from that, the film is great fun.

The build up of tension and sudden scary moments are pulled off with such finesse that they make you jump and then break into a nervous laugh.

And the film seems to take lip-smacking relish not just in watching strapping, grown men quake and scream “Mummy”, but also when they take to wearing saris as a suraksha-kavach, and are told not to go out late, not to go alone, to stay indoors.

That’s because apart from the joys of spooky, Stree’s writing, direction and acting are clever — the script adds little quirks to characters, at times to assist a twist, but also, sometimes, to tantalise us, aivain, for the fun of it.

We don’t know, for example, who Shama is, though we see a dangling earring on Rudra’s study lamp.

Dialogue writer Sumit Arora deserves a standing ovation, not just for lines that will make you cackle long after you’ve left the theatre, but for complementing the screenplay in such a delightful way.

There are small set pieces of conversation in the film — Daddy explaining to beta what “friendship” between men and women is, how to channel the build-up of urja inside, innuendos, chatter of three friends — that are worth rewinding and playing over and over.

His brilliant lines are assigned to a very talented lot.

Pankaj Tripathi is always very good. But more than him, it’s Aparshakti Khurrana and Abhishek Banerjee who keep us laughing with their banter. It’s as if they are on a buzzer round and each one must respond with a crackling response in record time.

Both the boys are very good, and yet Khurrana stands out.

Rajkummar Rao, we all know and agree, is an exceptional actor. And now he is not just good in high-brow, arty movies, but also as the lead in small, small-town, mainstream movies in a way that few actors in Mumbai have ever been.

He is as pitch-perfect as Chanderi ka Manish Malhotra as he was in Bareilly Ki Barfi.

Rao, along with Ayushmann Khurrana, Vicky Kaushal and others, may well  be the game changer in commercial cinema — they may make it commercially safe for the hero not to be bristling with toxic masculinity, but just be a normal, slightly looser type of guy.

Oh what a relief! What joy!

But just as I imagine this bliss, Shraddha Kapoor raises her pretty head.

She is the weakest, vaguest link in Stree. Ms Kapoor is just horrible. And here her meagre skills as an actor get highlighted because she is surrounded by excellent actors.

The film does try its best to distract us — the screen often fills up with pretty shots of her face, and the camera stares at the nape of her neck as she ties her hair into a bun.

Sexy, but, sadly, we are not stupid.

We can see that this stree ain’t got the chops.