This film takes a rom com take on a serious subject, and cautiously tries to tell us about a reality that many would tend to ignore. 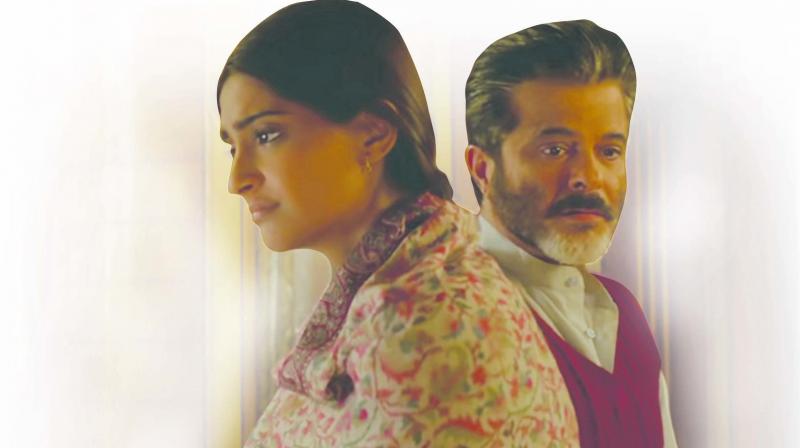 Sonam Kapoor looks real as a small town girl but is limited in her role by way of a reclusive and withdrawn girl who doesn’t lead a complete life.
Rating:

Mainstream Hindi cinema has rarely broached subjects that are very “here and now” in terms of its content. Even when it does, it barely touches several grim issues and glosses over key challenges that ought to be taken up head on. In Ek Ladki Ko Dekha Toh Aisa Laga, debutant director Shelly Chopra Dhar — along with writer Gazal Dhaliwa — has conceived a love story that can be truly called “contemporary” and something that many societies across the world seem to be grappling with — same-sex marriages. To be fair, in her very first film, she also manages to raise many other changing needs and demands of our lives, particularly in an urban landscape.

Showing growing confidence initially with mainstream actors essaying unconventional roles, she seems to have bitten off more than she could chew, and very gingerly lets light-hearted drama take over to allow a progressive theme devolve into the obvious, particularly in the closing scenes.  The end result is: several top-drawer actors give in rather tamely in a film that seems aimed squarely at the fast evolving demographic.  It also takes too long to get to the point, and loads the narrative with stereotyped Punjabi characters who mouth silly rehearsed lines with precious little variation.

Sweet (Sonam Kapoor) hasn’t had it easy right from the word go. Daughter to a single parent, the rich garment manufacturer Balbir Choudhary based in Monga (Punjab), she remains introverted and suffers a lonely childhood.  Even in her adulthood, she has to contend with her over-enthusiastic family that wants to get her married at any cost. The only solace she seems to have is when she pens her diary and pours out her life’s innermost feelings. That no one dares to read her diary in which she paints to done up brides walking hand in hand, is obviously something that would have ended matters long ago. Or at least, there would have been some revelation. But, barring her brother, who is also her confidant, Abhishek Duhan, no one is aware of her sexual orientation.

When a young writer Sahil Mirza (RajKummar Rao), who is a self-respecting son of a big-time film producer (Kanwaljeet Singh), but a failed writer, gets completely smitten by her, Sweety begins to see reason to smile. And live life afresh. A chance meeting with Mirza at a theatre where she sneaks into to get rid of her brother’s prying eyes, changes her entire outlook too. Mirza’s infatuation for her is so strong that he decides to follow her all the way to her small town, and even gets inspired to eke out a living as a small-time acting school owner and teacher.

Thanks to his flourishing business, Balbir has earned a lot of respect in his town, and would never settle for anything less than a worthy Hindu Punjabi son-in-law.  As Sweety plots her escape, and Mirza becomes her partner in crime, confusion over their “intimacy”, begins to change the family dynamics.

How does Sweety’s secret that she has harboured for so long get communicated to her family, as also to the rest of the world around her? Wish the film had answers to deal with some unrelentingly pressing questions!

Once the two-hour long film exposes us to the primary focus of the story that takes eternities to reach its logical summation, the plot by Chopra-Dhar loses steam, literally midway. And, therefore, while many of the film’s unvarnished empathies are laid out before you, the unraveling of many of the grave questions get tacky. For instance, instead of a riveting denouement, an uncomplicated unfurling of events becomes an unfussy social commentary that fails to give us a wrenching, heartfelt drama seeking a new definition of womanhood. And, so, the different perspectives of the two women in question; the respectable father’s pride; the big brother’s vigilante concern, all are juxtaposed to cram into a fee-good happy finale.  While everything seems to be in place, poor writing looks defensively odd. The relationship between the two women, which is central to the film’s full-bloodedness, allows the story to trip up, and plunges into mediocrity from being a rarity in the first stages of its scripting.

It seems Chopra-Dhar had a bold idea on the table, but didn’t want to force it down the audience’s throats, and wanted to allow unrestrained and easy-going blitheness do all the messaging. Too bad, its implication of “Live and Let live” backfires, despite its obvious good intentions. Besides its premise of a same-sex alliances, there are also other interesting bits of characters that the film can boast of — a divorced middle-aged woman cook Chhatro, who aspires to be a Bollywood actor someday (played with self-confidence and gusto by her perfect comic timing Juhi Chawla) looking for a partner (“personal or professional”, she asks); a father of a would-be bride Kapoor spending all his free time either watching cookery shows on the telly, or cooking, much to his mother’s sorrow; a no-nonsense brother who is not a tyrannical weirdo but an affable understanding brother. Chawla makes good use of her small role and is a delight when she and Anil Kapoor interact, Duhan is likeable not just because of his role, but also his controlled acting. Cassandra is another face which sparkles and owns the screen with her presence. Sonam Kapoor looks real as a small town girl but is limited in her role by way of a reclusive and withdrawn girl who doesn’t lead a complete life. Two decades ago, Hollywood’s autobiographical film Boys Don’t Cry, moved every filmgoer and won its lead actress Hilary Swank an Academy award besides nominations in other categories. This film takes a rom com take on a serious subject, and cautiously tries to tell us about a reality that many would tend to ignore.

At best, ELKDTAL is out-there! But not quite!