Undoubtedly, the film is a big bummer and not worthwhile but Priyanka stands out as the conniving business empress. 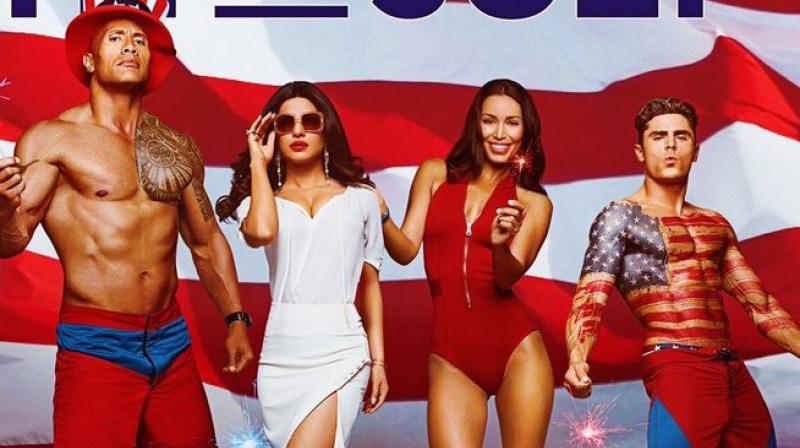 The poster of 'Baywatch.'
Rating:

Taut, fuller breasts on leggy lasses, body-hugging swimsuits and tons of shots of beefy lads Zac Efron and Dwayne ‘The Rock’ Johnson flexing their muscles pretty much sums up Seth Gordon’s slapdash diegesis of ‘Baywatch’. If the original and equally comatose 90’s series catapulted Pamela Anderson and David Hasselhoff’s careers, the senseless adaptation has only scarred the new cast’s repute as credible actors. Sans a few altercations between Mitch (Dwayne Johnson) and a disgraced and flat broke Olympian Matt Brody (Zac Efron), the first half does not possess a single element of intrigue; one has to be content with hourglass figures and gym-sculpted bodies.

After watching ‘Baywatch,’ it is inconceivable that the same Seth Gordon had once made the laugh riot ‘Horrible Bosses,’ a mere mention of which not only tickles our funny bones even to this day but also helps resonate the renditions of his now iconic characters like Motherfucker Jones and a scandalous Jennifer Aniston with us. Johnson, lieutenant of the Baywatch lifeguard squad, which protect the beaches of Emerald bay area, takes it upon himself to eliminate all the illegal activities spearheaded by the new owner of Huntley Club, Victoria Leeds (Priyanka Chopra). But his team is divided; Brody is a fallen hero looking for redemption and does not agree with Mitch’s ideology that 'they are the heart and soul of the beach', to which I say: really? A selfish former hero, two misfit novices and a handful of bikini clad veterans embark on a voyage to takedown the villain. And how do we know Priyanka aka Leeds is the bad girl? Because she reiterates it in every single frame, lest we forget!

Priyanka Chopra is a big deal, both in India and now US, so it will be criminal to not critique her debut performance, which, by the way, was spectacular. Yes, she could have rolled her ‘R’s a little less and kept the unnecessary smouldering at bay. But again, PeeCee is a sight to behold and saviour of this sinking ship. Undoubtedly, ‘Baywatch’ is a big bummer and not worthwhile but Priyanka stands out as the conniving business empress. She is seducing, manipulative and malicious, and commands authority; just what was expected of an actress who is 50-films old.

The only other time we saw Priyanka in a negative avatar was in the 2004-released Hindi film ‘Aitraaz’. The same level of aggression, intensity and rigidity hooked us back then, with fond memories of the past rushing back and forth throughout the screening of this flick. Her grip over characters is truly commendable, like she owns them, like they are her second skin. If it wasn’t for Priyanka, the film would have had absolutely nothing to boost of. Where is the plot? Blasé!

As much as we love Dwayne Johnson, we would never want to see him try to fit into the shoes of David Hasselhoff and failing miserably. His next-to-God act is pretentious, annoying and borderline narcissistic. Zac, on the other hand, is a loud rebellious snob, basically everything that he already was in ‘Neighbours’. Alexandra Daddario as Summer was easy-breezy. Thanks to Zac and Dwayne’s pointless scuffles, she did not have much to do in the film, other than being a side leg to the self-proclaimed messiahs of the beach. While Daddario was disappointingly underused, Dwayne and Zac were undesirably abused.

Pamela’s protruding bosom and Hasselhoff’s saggy body do make a comeback but add nothing to the storyline, which is the case with this joke of a movie- P-L-O-T-L-E-S-S.