The strangely titled Veere Di Wedding is a fun, joyous, blingy film seemingly about shaadi and silly girldom. But actually it’s more than just that. 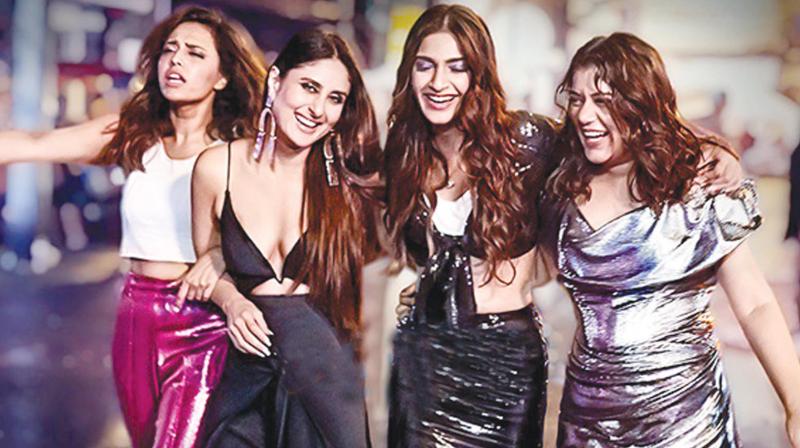 The strangely titled Veere Di Wedding is a fun, joyous, blingy film seemingly about shaadi and silly girldom. But actually it’s more than just that.

In glitzy, psychedelic banquet halls crowded with designer saris and lehenga-cholis, in between its loud song and dance routines, mild rona-dhona and hysterical bitching sessions, it packs in enough truth about girls and their lives that for once the Censor Board’s “A” certification delighted me.

In South Delhi, a voiceover introduces us to Veere — the cozy club of four best-friends from school who love each other and soon grow up into Kalindi (Kareena Kapoor), Avni (Sonam Kapoor), Sakshi (Swara Bhaskar) and Meera (Shikha Talsania).

These chaddi buddies, now living their separate lives, are in various stages of dysfunction when it comes to their matrimonial situation.

Avni is a divorce lawyer whose mother (Neena Gupta) won’t stop pestering her about getting married.

Sakshi is mostly drunk and living off the riches of her dear daddy while trying to avoid any talk of her impending divorce.

Meera, or Mother Dairy as she is lovingly called, is an overweight mother who hasn’t had sex with her husband John for over a year. She married against her family’s wishes is now a sex-deprived outcast.

Kalu, born to parents she watched fighting viciously all the time, has little to do with her father and his second wife. She is also scared of getting married.

She takes her time to go over Rishabh’s proposal, but eventually relents and arrives in her Cookie chachu’s (Vivek Mushran) house in Delhi to get married.

The four girls, in their snooty ensembles, hug and then carefully cross the sharp divide, travelling from South to West Delhi for Kalu’s shaadi.

It’s Kalu’s dead mother Ritu’s voiceover that accompanies us all through, telling us their life’s stories as they begin to both unravel and bloom.

The lead up to the wedding is conducted with the mirth, masti and loud saasu ma’s instructions we’ve now come to expect from Bollywood.

There are funny dialogues, lots of shopping, hideous gowns and strangely decorated halls. There are also dance practice sessions, gossiping aunties, a panditji, and in between all this the girls bond and talk of their lives — what they want, what they don’t want, their fears, their desires.

Often, their real life intervenes. And when it does so rudely, there’s always a villa with a pool in Phuket to run off to.

While most of Veere Di Wedding is in a high-jinks mode, often funny and happy, there are some rather stilted, awkward scenes as well, especially some involving the film’s two big stars, as if the director went on vacation, leaving the actors to their own silly devices.

There is also lots of icky product placement which made me wonder and worry about the commerce of films which have women as leads. It seems even with two major stars, no single Bollywood producer could write a cheque to cover all the expenses.

Imagine that ever happening if instead of the two Kapoor girls, there were two Khan men.

Director Ghosh’s Veere Di Wedding is not always politically correct and it’s not always real. Only one of the girls has a real job and mostly the film is a celebration of rich richie, flaky girldom en route to a happy marriage. Yet it cracks some coy ceilings while flashing an assortment of sexy cleavages in expensive, designer clothes.

Veere Di Wedding lets the girls abuse, and laugh as they talk crudely about sex and their sex drive. The film’s loose talk and banter is often very funny, and naughty.

We hear long laments about boys and sex, and slap-own-forehead regret after random sex with random men.

Then it goes a step forward with the help of the always spunky Swara Bhaskar to give us a nice, long orgasm.

The four girls and the characters they play are naturally, neatly split by their status as actresses and stars.

While Kareena Kapoor and Sonam are framed and presented as gorgeous clothes horses, with the camera lovingly admiring them all the time, the characters played by Swara and Shikha are given substance and great lines.

While the stars, with their diva poses and pouts, raise the film’s hot quotient, making it also the best window-shopping experience I’ve had in a while, Swara and Shikha bring to it warmth and realness that grounds it and makes the film identifiable.

But Veere Di Wedding belongs equally to all the four actresses — they together give the film its unapologetic moxie. Together they seem to be saying, meri life, meri marzi, duniya teri aisi-taisi.

That Veere Di Wedding says this while driving around in a Bentley and downing large pegs of alcoholic beverages doesn’t make it any less significant.