Shakuntala Devi review: A feminist in a sexist setting

Along with Shakuntala Devi's dazzling mind, the film wants us to also see the warts and ugliness of this “amazing” woman 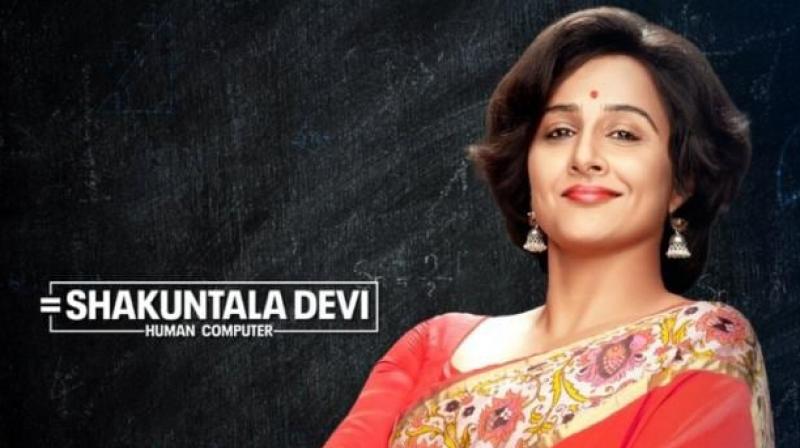 One story is of a girl, Shakuntala, who has had no schooling, no mentor, no formal training, but has a brain that loves figuring out numbers and how they play. A girl who grows up to become a mathematical genius with sparkling eyes and bright sarees with happily contrasting borders.

The second story, of equal prominence and significance, is of mothers and daughters, and their often fraught relationship.

This story of affection, expectation, disappointment, of troubled mothers and their angry daughters spans three generations. It's the story of how mothers and daughters struggle with each other, each wanting the exact same things — acceptance, love and some praise. And how life often comes a full circle, when daughters become mothers themselves and finally begin to understand and love their mothers.

Shakuntala Devi tells the story of a fiercely feminist, independent, successful woman who, in 1977, calculated the 23rd root of a 201-digit number in 50 seconds, but it sets it in a sexist, homely frame. A lesser actress would neither have been able to claim the character as her own nor redeem the film the way Vidya Balan does.

Shakuntala Devi opens in London on a pretty artificial note. A woman in a grisly wig seems rather miffed as she walks into a meeting with a lawyer. Anupama (Sanya Malhotra) wants to sue her mother, Shakuntala Devi, for destroying her financially. "Your mother could get a jail sentence," the lawyer says.

“My mother has taken from me everything I loved,” Anu says and the film cuts to 1934 Bangalore where, in sepia glow, a five-year-old in pigtails with gajra, casually does a calculation involving a 10-digit number. And then she does another one.

To young Shakuntala's father (played by Prakash Belawari with his trademark mixture of perfidy and obsequiousness), having a mathematical genius at home means a source of income. He immediately starts taking bookings for shows.

As Shakuntala turns into a "performer", she starts resenting the fact that she doesn't go to school, that her mother never stands up for her, that though she runs the house she has been deprived of a childhood.

Shakuntala grows up accepting the transactional nature of her relationship with her family. She internalises the fact that she is on her own, and that she has a skill which will always take care of her. So she orders her dad around, drinks, has an affair and shuts up men with her prompt, correct answers when they think they are throwing challenging mathematical equations at a woman in a saree.

Soon she moves to London, leaving behind a story that speaks less of her appetite for violence, and more about her attitude — she will not settle for less than what she thinks she deserves.

In London, a man, impressed with her genius, watches how her crude style and broken English make people laugh and be dismissive of her talent. He decides to give her and her stage shows a makeover, to make them more engaging, entertaining, spectacular.

The film keeps toggling between Shakuntala Devi's past and present, the personal and the professional. As Shakuntala the genius impresses the world, away from public accolades is familial dysfunction.

She's called the "human computer" because she can do cube roots, give answers in reverse, reel off the dates of all Sundays of any year in seconds. But in the whirlwind that is her life, men don’t stay because they don’t feel "needed".

But Paritosh Banerjee (Jisshu Sengupta) is different. He's confident and doesn't want her to change. They marry, have a kid, and for a while Shakuntala is just a mother and wife. But the pull of the stage is too much. So she grabs little Anu and returns to tour the world.

They meet Nelson Mandela, Shakuntala Devi enters the Guinness Book of World Records, but Anu misses her father, having a home, and begins to see only her mother’s flaws. She fights and breaks free, but years later, when a grown-up Anu says she wants to marry the boy she loves, Ajay (Amit Sadh), Shakuntala Devi disapproves, repeating the cycle of her own life. Shakuntala wants Anu to keep circling in orbit around her. Because otherwise, in her empty home, there is no beholder of her genius.

It’s not easy to write an engaging, full-length film where the protagonist’s great skill and performance is rattling off numbers. So writers have to find an "in", they have to figure out how to frame the story. And this usually takes them home. Especially in the case of women.

The film, written by Anu Menon, Nayanika Mathani and Ishita Moitra, treats us to the thrilling, impressive genius of Shakuntala Devi, but pretty soon it begins to view her only through the eyes of her daughter. There’s a purpose to this, of course.

Along with Shakuntala Devi's dazzling mind, the film wants us to also see the warts and ugliness of this “amazing” woman. It wants us to embrace her with her flaws.

Finding a viewpoint, a voice that tells a story helps create a neat narrative, a clear plot-line that shines light on those aspects of a personality which may otherwise remain hidden.

My problem is not so much with the familial framing, but with the fact that it ends up dominating the story. As the film progresses, the frame gets tighter, simplistic, and Shakuntala Devi's playground shrinks.

Biopics of men also often venture into the personal, but they are not contained within that one narrative, one point of view. There are more voices, more points of view.

That just won’t happen. And yet, in the case of women, it often does.
This is why research and writing are important.

In Shakuntala Devi, the stuff that's shown about her public performances is what you’d get with half-a-day’s research. What's missing are moments of solitude with her. How did she prepare for the Guinness Record? What did she read, when did she practice, how did she teach herself calendar tricks… How did she progress from playing with a 10-digit number to the 201-digit miracle?

In her personal space too we get to see Shakuntala Devi's relationships with her mother, father, husband and daughter, but all interactions are whittled down to convey nothing more than the timeline of her life: Missed having a childhood. Moved to London. Was successful. Then they met. Got married. Loved. Separated. Toured the world with Anu. Fought. Estranged.

Each one conveys an event, but offers little insight. The perspective, if we can call it that, comes via Ms Balan as she waltzes in and out of rooms, throwing feminist vibes with oodles of self-love.

Shakuntala Devi the movie plays a lot with time, jumping between the past and present. To make these transitions easy on us, it gives us places and dates. But there's a tackiness in the construction of scenes which comes from using cinematic cliches rather than coming up with something original. Even stock scenes can be lifted, but there's little detailing here to do that. The few scenes that do stand out involve the chutzpah of Shakuntala Devi.

Thankfully, Vidya Balan's 1,000-watt presence, along with that of a very competent ensemble of supporting actors, especially Jisshu Sengupta, Sanya Malhotra and Amit Sadh, overrides most of these flaws.

Ms Balan has a big, radiant personality that crackles with an attractive inner cosmos. And yet she repeatedly inhabits real-life characters, bringing them to life with warmth and ease.

It’s difficult to carry off a character where the high-points are rattling off numbers, repeatedly.

Ms Balan got little to work with here. So she grabbed the few things that stood out -- the south Indian accent, the chirpy 'Am I correct?' refrain, and a feminist worldview. She meshed all this with her own moxie.

Vidya Balan ages almost 50 years in the film as she goes through various stages of the life of a woman who passed away at the age of 83. We see her as young and old, drunk and sober, genius and happy, troubled and lonely, each one crafted as a distinct entity. That's why, henceforth, whenever Shakuntala Devi is mentioned, it's these images of Vidya Balan which will pop up in heads.

To construct the many avatars of Shakuntala Devi, Ms Balan is ably assisted by costume designer Niharika Bhasin. With just sarees, earrings, hairstyles and a few accessories, Ms Bhasin manages to create not just different looks, but infuses them with a palpably different spirit -- the rustic girl who arrives in London, the confident woman who falls in love and marries, the busy, working mother with short hair, and the aging, bespectacled woman who is lonely, sad, bitter, but rich.

Throughout the film a lot of attention is paid to Shakuntala Devi's head, her hair. Cinematographer Keiko Nakahara often aims his camera’s lens on the back of Ms Balan's head -- serenading the gajra dangling from her pigtails, smiling at the simple jooda with a piece of bling, or following the bounce of her short hair.

It makes sense. That’s the part of Shakuntala Devi which baffled psychologists and scientists who ran tests on her brain to figure out how she could do complicated calculations so fast. They couldn't. It held mystique then, and it holds mystique even now.