Baywatch movie review: No babe in the bay

For about 30 minutes I enjoyed Baywatch because it was doing cartwheels around Dwayne Johnson. 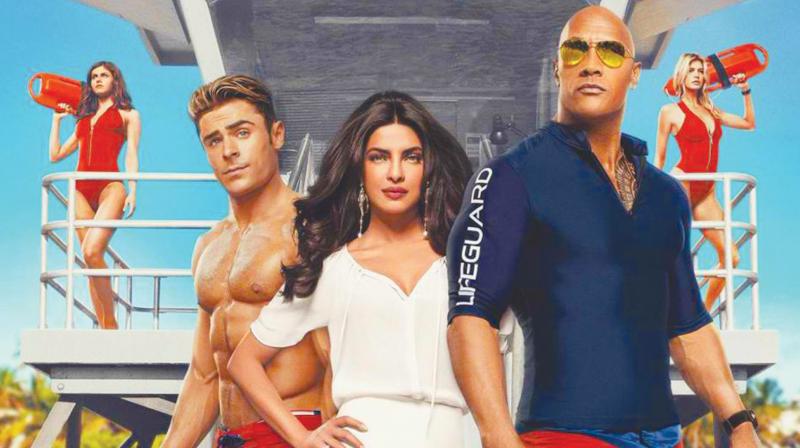 A still from the movie Baywatch
Rating:

Though I often indulge in the joys of Hollywood films, both trashy and classy, I don’t usually review them. Mostly because I can’t relate to them in the way I can relate to Indian films. Also, I often can’t remember their names. Between Jack and Mac, and Jane and Marie, I get confused.

Two things compelled me to watch and review Baywatch.

One, it’s Piggy Chops’ debut film with one of my favourite human beings on earth.

I go to Dwyane Johnson often because he’s funny despite being massive, his ring name, i.e. “The Rock”, is too cool, and now he’s an app — The Rock Clock — I use.

Sometimes I also go to him, in poster form, for motivation.

I really believe that if we can scream any of his quotes staring at ourselves in the mirror straight-faced, our muscles will bulge and our chest will swell an inch just out of respect for how corny we can be.

I plan to try this one: When life put you in tough situations, don’t say why me? Just say, Try me.

I mean, to create hype about yourself in your head to get some sh** done has to be America’s best gift to mankind.

The other reason was, I dreamt about Priyanka Chopra’s legs.

Since we can no longer skewer cow legs, early this week some sanskari people decided that it was best to skewer her toned legs for the ultimate paap of being in the presence of Prime Minister Narendra Modi.

Haw-hai, the raksha sena of Indian culture screamed stood in shocked attention in their khaki long pants to trash this bad firangi behaviour. Many Bharatiya naris, I’m told, even ran to their cupboards to fetch a dupatta.

So, I had a dream of Piggy Chops doing the Can Can to welcome Mr Modi just as he touches down in Paris on Saturday.

So to oggle at them, I decided to go.In all of Baywatch, PC, who plays Victoria Lane, is fully sanskari. Her legs are mostly covered though she does give us a lovely peek at the magical powers of a wonder bra in a dress that’s literally splitting in two out of respect for her cleavage.

For about 30 minutes I enjoyed Baywatch because it was doing cartwheels around Dwayne Johnson. And when it was not, the camera would simply stare at a lifeguard’s décolleté moving towards us in slo-mo, or pert buns in tiny bikini bottoms would waft across the screen.

I mean, what’s there not to like. But then, since four people were employed to write the film’s story, and two more were hired to write the screenplay, Baywatch drops this silly, vacuous fun and gets all serious.

Matt Brody (Zac Efron) keeps warning Mitch Buchannon (Dwayne Johnson) to focus on the things Baywatch lifeguards do — dashing into the sea in fast-forward, emerging in slo-mo with a flopped body while wearing a cool, detached expression and then giving mouth-to-mouth.

But Mitch doesn’t listen. He is after Victoria, her drugs and her nasty plan to privatise his precious Emerald Bay.

And they do this chasing and spying and fighting fully clothed and on dry land.

Feel free to beat me with anyone’s legs next time you see me.