The film’s plot is a mumbo jumbo of past sins, a sullen villain and a killer virus 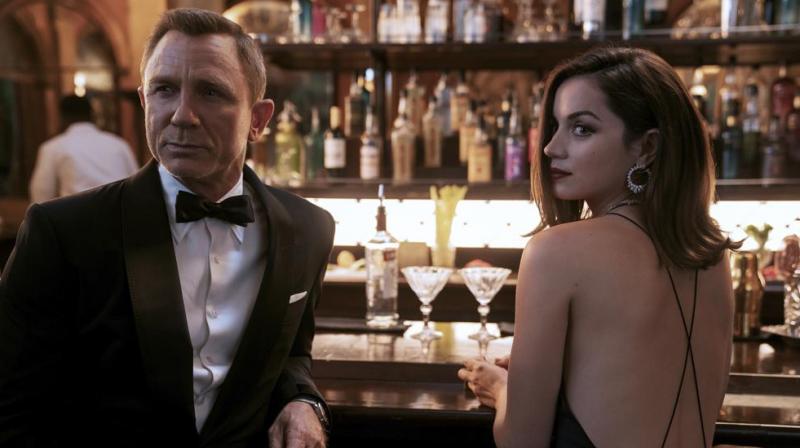 I love Daniel Craig, but I didn’t love No Time to Die. I liked it, because of Craig.

I didn’t expect to cry at the end, but I did.

I was terribly sad to see Craig go. But I was also upset because No Time To Die isn't the thrilling, electrifying, grand send-off that Craig, the best James Bond ever, deserved.

Though Daniel Craig’s Bond has had a chequered career, alternating between dazzling highs and dreary lows — from the cool swagger of Casino Royale (2006) to the mind-bogglingly dull Quantum of Solace (2008), from the thrill of Skyfall (2012) to the needlessly confounding Spectre (2015) -- his last Bond venture should not have been a melodramatic intercontinental jaunt involving a sad betrayal that wasn’t, a five-year-old’s knitted cuddly toy, too much domesticity, a whiny villain and death by nanobots.

No Time to Die, the 25th film in the Bond series, is depressingly like a big-budget Bollywood film. If it wasn’t powered by Craig’s presence, style and gravitas, it could well have been one of those Tiger Zinda Hai type of hyped-up dullness with Salman Khan.

James Bond is the world’s greatest survivor. No one else in the history of cinema has been persecuted, chased, shot at, imprisoned or laid in more hostile beds than Bond. But even he can’t survive the sort of prosaic, self-conscious political correctness and multicultural sensitivity that No Time To Die is burdened with.

For a while now Bond has been mired in human emotions and boring complications of life to seem "real". That’s a criminal offence because Bond is supposed to be the coolest dude, a British spy who has so much chutzpah that were he to sprinkle a pinch of it on the world, we’d all be rising to offend with audacity.

But No Time To Die ticks so many inclusive, politically-correct boxes that after a while you want it to take a breath and calm down. Halfway through the 2 hour and 44 minute long film, I felt like screaming, "It’s okay, we get it. We know you are a good, decent, gender-race sensitive film that won’t tolerate a sexist joke. But can you please just have some fun?"

I wish someone had done that while the film was being written and directed.

After about five or six directors said no, including Danny Boyle, No Time To Die wound its way to Cary Joji Fukunaga. A director of Asian descent, he came to direct Bond after making HBO's True Detective series, and the 2011 Jane Eyre starring Mia Wasikowska and Michael Fassbender.

No Time To Die’s screenplay — written by him, Neal Purvis, Robert Wade and Phoebe Waller-Bridge (of Fleabag fame) — is feminist and populated by lots of actors of colour.

The impenetrable world of white, male spies has been breached, and the film has no trouble deciding who will hold the baby and who will wield the gun in a fight sequence.

But the film’s plot is a mumbo jumbo of past sins, a sullen villain and a killer virus.

No Time To Die opens on a frosty note. Young Madeleine Swann witnesses the murder of her mother but escapes. The film then cuts to many years later, in Materna, Italy, where Bond and a fully grown Madeleine Swann (Lea Seydoux) are enjoying romantic coitus. Their bliss is interrupted by an exploding tomb and a misunderstanding.
Lurking everywhere is the imprisoned but active Ernst Stavro Blofeld (Christopher Waltz) and his evil empire, Spectre. There's also terrorist Lyutsifer Safin (Rami Malek) whose face has been cracking up with the urgent desire for revenge, and a gun-wielding man with an artificial eyeball that he keeps losing and recovering. There's also a DNA-specific virus that's designed to kill, and Russian scientist Valdo Obruchev (David Dencik) whom the Mi6 thought fit to employ and who, inexplicably, seems to be working to destroy the world but save Bond.
The CIA reaches out to a retired Bond to contain the spread of the virus, sexy agent Paloma (Ana de Armas) lends a helping hand, a woman calls herself 007 and it all ends on a Second World War military base with missiles set to go off.

There is really only one cardinal rule for Bond films: They have to be cool. There is nothing intricate or complicated about the best Bond films. They are the ultimate in fun and their feats of cinematic daring-do dwarf our wildest imaginations.

The chases and fights in Bond films are the benchmark of thrilling action sequences. Moneypenny is cool. Q is not cool but his gizmos are. Martinis that are shaken are cool. The glamorous locations where Bond struts his stuff, hot women in bikinis and backless gowns with a thigh holster are cool. And Bond films' villains, deadly, stunning and memorable, may not be cool, but they make the climactic fight of good over evil very cool.

The few high points of No Time To Die are moments when the film uses some of these old Bond tricks and treats — the signature Bond tune comes on during a chase, we smile when Craig says “I’m Bond, James Bond,” and laugh when he’s being mildly naughty in the bedroom.
Hans Zimmer’s music is fabulous, as are some of the car and bike chase sequences.

But all this is trivialised by a trite love-betrayal angle, a clueless child, and a villain who is forever whining about how he has been wronged.
Malek’s Safin is like a sulking old relative who has been holding on to a grudge. He keeps talking about the same thing in a grating whisper, coming across as more creepy than scary.

In just one scene Christopher Waltz's Blofeld gives a masterclass in what velvety villainy is all about. He crawls on our skin and soul before getting under it.

Daniel Craig is amazing, but he is done with Bond.

His macho swag is intact, but his heart isn’t in it. In the film’s last fight, his paunch worried me. And as he stood defeated by nanobots, a knitted doll tucked in his suspenders, I knew it’s time to say goodbye to Daniel Craig.

We come to Bond because his only true bond is with himself. Craig has, over five films, forged too many bonds and he’s ready to die for them.
We need a Bond who never says die. Who stops missiles and then orders a martini. Not one who gets defeated by nanobots and is ready to die for love.

Craig is not the most dashing Bond. That trophy goes to Sean Connery. But his excitingly unreadable and rugged face, that sits so beautifully on a body and personality made up of British elegance, steely, Russian-esque, shirts-off grit and a taut bootie, is irresistible.

He deserved a better goodbye. And so did we.