Bhangra Paa Le in the conventional sense is a truly “hatke” story. 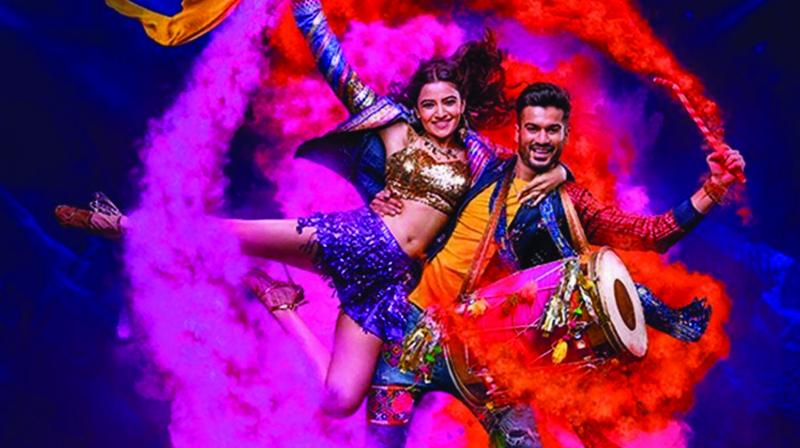 With the promise of a relaxed sensibility, the film moves on with a pace where it’s hard to remain cynical.
Rating:

A sepia-toned flashback dating back to pre-Independence Punjab in India takes us back to a soldier (Sunny Kaushal) who falls for the charm of a village belle (Shriya Pilgaonkar). She is already betrothed, and so, her family looks at him disapprovingly. Crestfallen, he begins to move away only to win everyone’s hearts with the graceful movements of his nimble feet, and guess what? He literally dances his way into her family’s heart. His obsession for bhangra has many admirers and wouldn’t let any hindrance come in the way of his achieving what he desires the most — his lady love!

Till a few years back, such a premise was apt for a story in which the roles were reversed: a girl proving her mettle as the best-suited bahu, and winning over her sasural. That it’s the boy Jaggi, hailing from a Punjabi background, this time, who wants to exhibit Bhangra on a big platform as he is deeply attached to the dance form, is very rare indeed. The film showcases a college rivalry where they compete with each other to win the international dance competition.

Bhangra Paa Le in the conventional sense is a truly “hatke” story. I haven’t said much about the film yet: just the fact that the basis itself is refreshing. Directed by Sneha Taurani, the narrative goes back and forth in time to draw parallels between the lives of Captaan Singh (Kaushal) in the 1940s, and his grandson Jaggi Singh in the present era (Kaushal again in a double role).

Written by Dheeraj Rattan, the 130-minute long film interweaves the two stories of two male members of the same family Captaan and Jaggi having a passion for bhangra. Jaggi, who moonlights as a DJ, is only interested in letting everyone learn about his grandfather who earned the dance form of bhangra its place in society. But since Captaan lost his leg in the war and came back to his pind more as a loser after losing World War II, he never got his due. Just like his grandfather, when Jaggi plays out a melodious beat on the dhol, it recharges whosoever listens to him play. In his new avatar, Jaggi is seen taking part in a college competition in Amritsar, where boys and girls are seen auditioning for a place in a Bhangra ensemble. He spots Simi (Ruksar Dhillon) of GNDU Club dancing away at a wedding and is impressed with her poise, and believes that she could his perfect partner. The two soon realise that they both belong to two rival colleges, and so, cannot unite as a team. Sparks fly and they display their fondness for each other despite differences, and since the two are equally ambitious, they must participate on the biggest Bhangra Battle in London. Jaggi sets up his own troupe called Pendu Club comprising the underdogs that has all the makings of finding themselves the coveted top-notch position. Needless to add, rivalry impedes their friendship too.

With the promise of a relaxed sensibility, the film moves on with a pace where it’s hard to remain cynical. But then, it’s also rather difficult to stay interested, unless perhaps the film jolts you out of a self-imposed slumber. Still, to be fair, its overall likeability makes up for its amateurish production values: overlit sets, overplayed characters, patronising script and uneven direction. The oddest thing that I found difficult to digest is the utter lack of musicality in the dancing scenes. For a film that is based on music and dance, poor choreography sticks out like a sore thumb. Some of the earlier dance movements in the qualifying rounds in the film may look natural for want of a professionally managed, choreographed style, the same cannot be said about the final showdown in London where some of the world’s best groups are supposedly in competition.

It’s Sunny Kaushal (brother of the more famous and acclaimed Vicky Kaushal) who with his pure Punjabi munda looks and natural acting charms his way into your hearts. That he is also a superb dancer enhances his presence and complements his potentiality. There are moments of pure cinematic highs too: Sheeba Chadha as Simi’s divorced single mother and Dhillon never go over the top, and never fill scenes with exaggerated reactions. That there is also a subtext with minor and major characters having a sense of purpose is all a plus for the film.

This sure was a nugget of a pure idea at the centre of this film; it’s plotting that is so straightforward that you would start second guessing the second half and will never get caught up in the predictable story. Thanks to Kaushal, it’s amiable enough to hold your attention for a while, but nothing that will sustain your interest for too long. With not much edge to the situations and very little momentum in the narrative, it doesn’t move you, despite its certain appeal.