Irrfan is Bollywood’s most entertaining travelling companion. At times he sets his companion free. At times he finds a bit of his lost self. 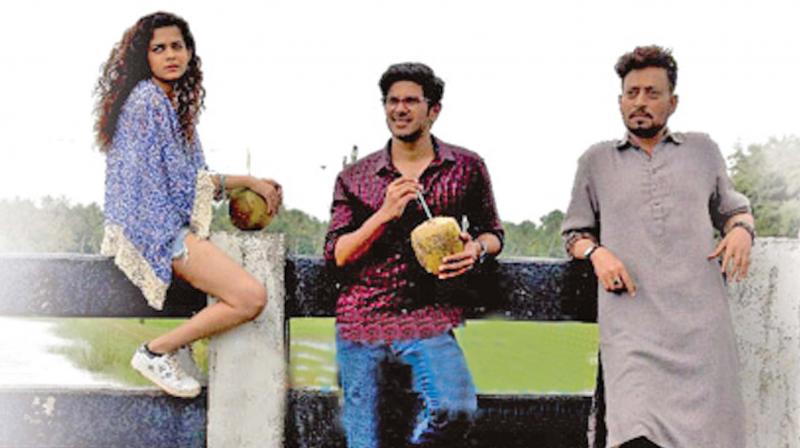 Still from the movie Karwaan
Rating:

Whether there’s an old grouchy man in his car with a potty chair strapped to the top (Piku), or he is driving a loveless single woman around hill stations in to prove to her that his old girlfriends still yearn for him (Qarib Qarib Single), or he’s escorting a long aluminium trunk with a dead body in the back of his van, Irrfan Khan makes us want to quickly pack our bags and tag along.

That’s why, perhaps, Bollywood repeatedly sends him out on long errands.

This time around the plot, premise of director Akarsh Khurana’s Karwaan is very dark, very funny.

A bus accident of devotees en route to Gangotri results in an abrupt, bizarre call to Avinash (Dulquer Salman) informing him of his father’s death. He is asked to collect the body from a courier company.

When he goes to claim the body, the mundane, everyday inefficiency we encounter routinely turns bizarre because the discussion is about a dead body and not, say, a mixer-grinder.

After getting the body, and just as it is about to be set on fire at an electric crematorium, Avinash’s friend Shaukat (Irrfan Khan) points out that something may be wrong.

Avinash, who has not yet bothered to open the trunk to take one last look at his father, opens it to realise that he’s got the body of another. Of an old woman.

Phone calls, more confusion, and finally he figures that he’s got someone’s mother, grandmother, and they have his father’s body.

Since they can’t make it, he has to go make the exchange.

Shaukat offers his van and company to Avinash who doesn’t seem to be grieving. At all.

That’s because Avinash has been grieving about his own life, and the choices he made every single day. He resents his father for not allowing him to become a photographer and instead having to work at an IT company where he has to tolerate a moron boss and annoying customers.

As Avinash and Shaukat escort the dead body whose nostrils are plugged with cotton, to a hostel to pick up Tanya (Mithila Palkar), and then to her mother who has his father’s body, the film is running on both — Avinash’s quiet, gentleman’s charm and Irrfan’s quick, quirky commentary. First it’s about the body, and then it’s the conservative Muslim’s unease around a girl who wears very short shorts, smokes, drinks and buys abortion test kits.

Avinash too finds himself sounding like his father around her.

Now that there ate three plus one in the van, two minor subplots stall the film a bit.

The film suddenly pauses and everyone seems to be going on weak, predictable tangents. But together these tangents yield a begum for Shaukat, and a way forward for Avinash.

Irrfan is Bollywood’s most interesting, entertaining travelling companion. At times he sets his companion free. At times he finds a bit of his lost self.

Karwaan runs on Irrfan’s wit and irritated sarcasm, while Dulquer grounds it.

Irrfan’s humour is always dark, and his delivery deadpan. We’ve seen it before, often, yet it entertains, and I found myself craving more.

Karwaan claims to “introduce” Dulquer Salman. This is either Bollywood’s stupidity or insularity or both.

DQ, as he is known, is Mammooty’s son and has starred in at least 25 Malayalam films, many of them blockbusters hits and several resulting in awards for him and others.

He is very good. And cute. Very.

I hope to see more of him. Soon.