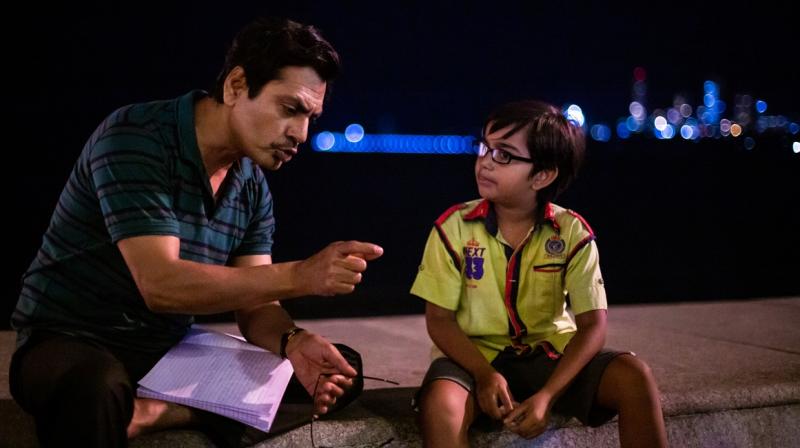 Sudhir Mishra, director of the beloved Hazaaron Khwaishein Aisi (2003), has been shooting duds for a while. But with Serious Men he seems to have regained his form, if not his sharp politics.

Serious Men is an entertaining, well-made film that tells the story of Ayyan Mani, a Dalit man who resents being invisible, and when he is seen he is subjected to daily humiliations, lucrative offers to convert, vote-bank politics. The film’s plot is about a desperate man’s desperate attempts to make sure his child, born in a pool of fraud by a hotel’s poolside, amounts to something. Except that the seemingly sweet, benign story of Serious Men, which is rooted in reality, is ring-fenced by a worldview that is seriously anti-Dalit.

While the film is sympathetic to men like Mani, it sets out to teach him a lesson. Merit, Serious Men says, is everything, it’s the great equalizer, and not opportunity. This karmic cycle of misdemeanours and comeuppance only sucks Mani into its orbit, not similarly fraudulent upper caste men.

Serious Men, based on a novel of the same title by Manu Joseph, opens with the posturing of an impatient, serious man who frowns and growls at the world. It seems to be in his way as he is rushing about doing very important things. Astro-physicist Aravind Acharya (Nassar) acts as if he’s on emergency duty to save the world with his discovery of alien microbes. They hold answers to humankind’s profound questions, he believes, and is in the pursuit of another round of government funding for his spatial explorations.

Everyone around Acharya defers to him, assuming that what sounds like gibberish to them are words of wisdom, for he is a man of greater knowledge, superior intellect and with a plan.

But Ayyan Mani (Nawazuddin Siddiqui), a dalit Tamilian, sees through Acharya and intently watches how he fakes his way through the world.

Mani is Acharya’s clerk, a la Massey Sahib, and is summoned to be shouted at for doing or not doing something, often just for being.

Throughout the film Mani addresses us directly, sharing with us what it means to be invisible, how IQ is not connected to social status or caste, how posturing is power, all the while picking up Acharya’s small gestures that stitch together a VIP identity. It includes Acharya leaning and whispering into a female assistant’s ears during meetings.

Mani watches how others worship at this altar of bullshit, and he wants a piece of it.

He too wants to be like them, the serious men. And with people lower than him in stature, cunning and gumption, Mani tries out the same urgent, intemperate demeanour, complete with nonsensical chatter, irritability and fancy neck-ties. It works.

But it’s too late for Mani. So all his hopes are pinned on his child. Oja (Indira Tiwari), Mani’s wife, is oblivious to his project.

Adi (Aakshath Das) seems like a bright kid who is shy and hard of hearing.
A convent school rejects him at first. But when, a few years later, Adi is a hailed as a genius in the dalit chawl, called “Abdul Kalam”, the school admits him.

In class, Adi often gazes out of the window, and when the teacher asks him what he’s thinking, he talks of photosynthesis for humans, about the “arrow of time”, and when probed further, he snaps, “I can’t deal with primitive minds like you”.

Enter a father-daughter politician duo — Keshav (Sanjay Narvekar) and Anuja Dhavre (Shweta Basu Prasad) — who, impressed by his scientific knowledge and the awe he inspires in the dalit chawl, pick on Adi, and recruit him.
They have an agenda. A high-rise housing complex where Mani’s dingy, rat-infested chawl squats.

Mani, who often uses his caste to get his way, is more than willing. And all goes as per plan till the day when, Sayani, Adi’s schoolfriend, is being thrashed by her mother for doing badly in an exam and lying about it.

Mani’s plan and Adi’s formidable reputation begin to unravel. Exam papers were bought, and there were a father’s instructive susurrations into his son’s ears.
As Mani’s life begins to spiral out of control, affecting Adi the most, he turns his sights on his boss, Acharya.

Nawazuddin Siddiqui is an exceptional actor who is able to convey the machinations of his character’s mind even while holding still. As a desperate father on a dogged pursuit of his and his son’s life amounting to something, he and little Aakshath Das hold the film together and are supported by a very strong ensemble of actors, including Indira Tiwari, Nassar, Sanjay Narvekar and Shweta Basu Prasad.

The film’s story is one part satire on significant men who posture, and lesser men who imitate that posturing, and one part political pamphlet about merit being supreme, about merit trumping all, irrespective of opportunity.

Manu Joseph is a fine writer but in Serious Men he betrays a rather abhorrent worldview.

Writers have a right to tell whatever stories they want to tell. But storytellers are like puppeteers who move their characters in certain ways, they decide what happens to them, what life lesson we draw from them.

Though the satire of Serious Men is primarily pivoted on upper caste Acharya and how he fools the world with gibberish and his nonsensical research, the film never interrogates him. In fact, the film redeems him by making him Adi and Mani’s saviour in the end.

Mani, on the other hand, is enveloped in ambiguity. Even when most vulnerable and narrating a story about his mother, we are made to feel it’s counterfeit.
And at the end, status quo reigns for all, except Mani and Adi.

The outlier is sent further away from the power centre, and the whole set-up seems to have been created to trump Mani, to teach the Dalit father and son a lesson.

I have not read Serious Men, but I read somewhere that Joseph claims kudos for daring to show a poor Dalit character as conniving.

There are no literary bravely awards to be given out for showing lower caste characters as fraudulent, dishonest. That has been the upper caste’s narrative for ages about “neech log”.

But if kudos are being doled out for reiterating upper caste prejudice about lower castes, then they are Joseph’s to claim.