War movie review: Surrender to the seduction of gorgeous

It’s supposed to be an in-joke, about Hrithik, Bollywood’s dancing-leaping hunk, making way for the similarly disposed and frenzied Tiger Shroff. 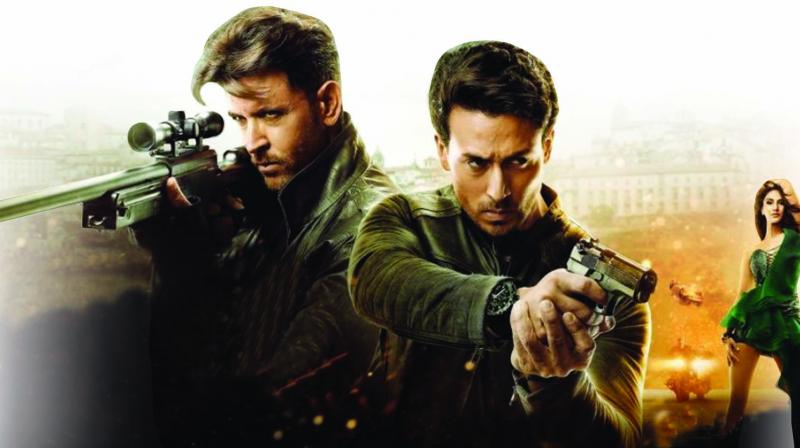 Pairing Hrithik Roshan and Tiger Shroff is the sort of casting coup that would have instantly sent YRF producers into uncontrollable, rapturous excitement.
Rating:

With a hoodwinking smirk and a tone so wry, the smoking hot and simultaneously smouldering Major Kabir (Hrithik Roshan) tells Junior that the ageing have to pass on the baton to the raging young.

It’s supposed to be an in-joke, about Hrithik, Bollywood’s dancing-leaping hunk, making way for the similarly disposed and frenzied Tiger Shroff. But this dialogue comes after the interval, after we have spent the first half of the film admiring and ogling at Hrithik — not just at his insane good looks, but also his swing and swag.

Junior attempts a knowing half smile. He knows he’s being had.

Pairing Hrithik Roshan and Tiger Shroff is the sort of casting coup that would have instantly sent YRF producers into uncontrollable, rapturous excitement. And given that both Hrithik and Tiger are stars who rule the box office not with their virtuosity, but their chiselled looks combined with lithe steps and kicks, War had to be an action film.

Director Siddharth Anand, who tried his hand at impetuous action-romance in 2014 (Bang Bang! starring Hrithik Roshan and Katrina Kaif) after Salaam Namaste, Ta Ra Rum Pum and Bachna Ae Haseenon, has done here what few would have the daring and skill to do. He has created an action film that embraces and celebrates this dude-dom unabashedly.

War draws its power and moxie from racy action, thrilling chases, and it seduces us with sexy, brawny gorgeousness. Its action scenes are more than just sequences inspired from various Hollywood films. Not only are they choreographed, executed and edited lyrically, they continually emit a cute whiff of bromance. As its stunts stun, Junior crushing on Senior makes you smile.

Given all this, a story seemed fatuous to War’s creators.

So, War doesn’t have a story. It has a premise wherein a series of fast and fantastic chases followed by thain-thain encounters are required to get the bad guys.

If India, a $9.45 trillion economy, needs to feel all macho, bold and brave by flexing its muscles at a neighbour whose economy is worth just $320 billion, then why will Bollywood be far behind?

As is the wont of all commercial enterprises, commercial cinema will do more than just ride the wave. It will further embellish, inflame and then ride the zeitgeist to happy profit margins.

All the big bad guys in War are Islamic militants who are collectively and separately devoting all their time and energy in trying to hurt India. A sub-plot about gaddars adds mildly secular variety to the baddies.

The film’s meagre plot draws some heft and seriousness of purpose from nationalistic fervour that the pursuit of jihadis is pivoted on. Repeated shots of the tiranga, dialogue about vatan parasti, about serving and saving the nation give War emotional zing.

But added to that is a dash of obsequious bigotry.

In dinon, if a film claiming to be patriotic has to be considered honourable and acceptable, there seems to be a prerequisite — it must express distrust of Muslims, if not hate.

In War, Islamophobia reigns. A Muslim Indian is told to prove his loyalty to desh. That eventually, a Hindu disguised as a Muslim turns out to be the gaddar is the film’s attempt at redeeming itself.

In War, a hierarchy is in place — of men and women entrusted to safeguard the nation from jihadis. On top sits the mantri, a Patel. Then comes Colonel Luthra (Ashutosh Rana), followed by Major Kabir (Roshan) who heads a special unit whose specialist members are trained to carry out kill-desh-ke-dushman ops with stealth, cunning and finesse.

Though we are not properly introduced to all the specialists, they stride across the screen with the cultivated nonchalance that desh ke deadly and macho rakshaks have imbibed from Top Gun predecessors.

War opens with a scene that seems like stock affair. A senior Bharat sarkar official is talking to a sharpshooter about a target — a jihadi salesman. But as he presses the trigger, the story twists.

In War, friends become foes, and foes must be taken out.

An officer has gone rogue and to take him out, his own student steps up.

In flashback, we see how young Khalid (Tiger Shroff), an eager beaver keen to wash off a parental daag, was told that he can’t be trusted because of his gaddar baap. And when he persisted, he was told to prove his loyalty.

War, a series of stunning frames serving as backdrops to fights and chases, is vapid but stunning.

The film has few dialogues, but every few minutes one seete-maro line comes our way. Thankfully, its action sequences — almost funny in their daring and execution — talk.

There’s one dizzy hatha-pai in a plane, a cool bike sequence, cars dancing and swerving on snow, gun fights, knife fights, bombs going off and, of course, much leaping about on other people’s terraces in foreign locales.

There is also one sequence, a la Mr & Mrs Smith, in which Hrithik and Tiger treat us to an amorous, gun-toting tango.

Cinematographer Benjamin Jasper and editor Aarif Sheikh are the devoted custodians of this all, lovingly shooting and cutting to heighten the thrill.

As the special people of the special unit lurch from one jihadi in one location to another, from Tikrit to Marakesh, Portugal to the Arctic Circle, the twists and turns provided by neurotoxins, a plastic surgeon and the pursuit of desh drohis keeps all the riding, fighting, blowing up from getting repetitive and boring.

In the pursuit of one Feroze Contractor, a money-laundering diamond merchant, one Naina (Vaani Kapoor) enters the plot to express love for Major Kabir.

However, the sensibility shown in creating her character — she’s a mother and a club entertainer — amounts to nothing. Sad.

It’s a very clever ploy to cast a current star, Tiger Shroff, opposite a star who has been feted, scarred and mulled by life’s experiences and the passage of time. And it’s to War’s credit that it dares to stick its neck out for the veteran.

When Tiger and Hrithik are together on the screen, War’s hot quotient is very high. At times, especially during the chase and fight sequences, the music is cool, as if the whole enterprise of Yash Raj Films is serenading the two heroes, celebrating their cracking chemistry.

But there is never any doubt for whom War’s heart throbs.

Grand backdrops are created — a ball of fire, a large glass dome crashing... — for Hrithik to drive upon or walk away from.

Hrithik returns all that love in good measure as he owns the film, garnishing every scene with the slightly detached smile of a master. But the real reason War exists is to showcase, with a generous application of bronzer on his face and a hint of salt-and-pepper in his crew cut, god’s very special gift to celluloid.

Tiger Shroff is cute, but also stiff. He begins all awkward here, but over the passage of the film, relaxes and settles into his character.

His USP is that he matches the speed of his fist work with his footwork. Tiger’s action and dance steps have the precision of an eager and brilliant student, but there is also a dull seriousness to it all. They are like perfect but self-conscious routines honed over sweaty, laborious rehearsals.

On the other hand, Hrithik’s entire being is made of cool, swag and chutzpah.

Hrithik Roshan is not a great actor. He’s adequate. But his action and dance steps have masti, melody. There’s a playful rhythm, lightness and ease to them that comes with age and experience.

Tiger as Khalid, a starry-eyed bachcha, a rookie admiring the vet, fangirls Hrithik rather sweetly, humbly. You can almost see his eyes emitting flighty little hearts whenever Hrithik is around.

In fact, at one point in War, the smart girl from the specialist unit is pulled off from her shaadi mandap to confab about an urgent desh-ki-suraksha matter. Before returning to her groom, she looks at Hrithik and says, “Abhi bhi bolo sir, bhaag ke shaadi kar loongi”.

Captain Khalid, all shy and blushing, looks at her with a half smile and mutters with his threaded eyebrow half raised, “Get in line, ya”.