As we celebrate India’s 75 years of independence, this movie shows a mirror on our society 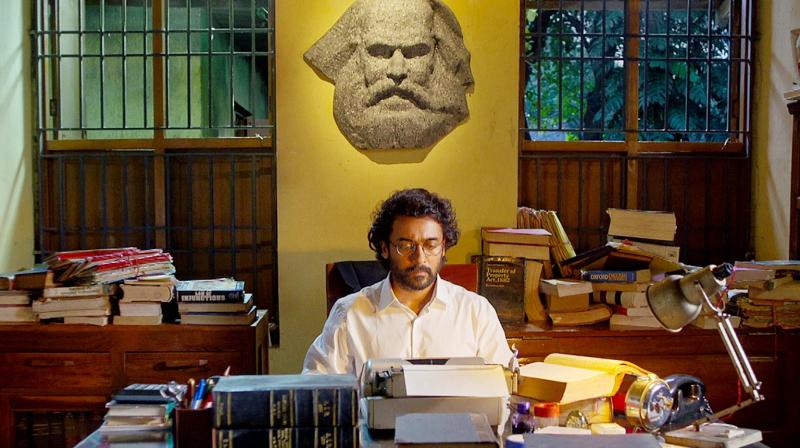 The protagonist in Jai Bhim is “Justice” itself and the director, Tha Se Gnanavel and the lead actor, Suriya throughout the films share with us the trials and tribulations of seeking justice. (Image: @PrimeVideoIN)

Stephanie Thomson, an editor at the World Economic Forum, Davos, in an article entitled “10 movies that changed the world”, had said: “A good film does more than entertain or fill seats at the cinema. It has the power to change hearts and minds – and sometimes society more widely.”

Jai Bhim is an extraordinary film that grips the society’s attention, shakes the human conscience and shackles the faith and hope that we have in democracy, democratic institutions and indeed, the rule of law. As we celebrate India’s 75 years of independence, Jai Bhim shows a mirror on our society. It pushes the boundaries of film making and connecting it, not just to stark reality, but helps us to work towards seeking social and institutional transformation for protecting the human rights of the most vulnerable.

Ordinarily, films are a compelling source and medium of entertainment, but there are rare occasions, when a film transcends the boundaries of entertainment and enters into a more difficult world of seeking empowerment, emancipation and enlightenment. Jai Bhim, beautifully and successfully does this with honesty, integrity and humility in storytelling, acting and directing.

The story of Jai Bhim is about the lives of some of the most marginalised sections of the society. Even after 75 years of Indian democracy, their struggles to fight for basic human rights and human dignity continue unabated. The protagonist of the film, in my view, is not the family of Senggeni or Rajakannu or any of the other victims of custodial violence. The protagonist is also not Suriya, a thoroughly gifted actor, whose assumption of the role of Chandru, a public interest and human rights lawyer was truly exemplary. Few people could have done what Suriya did in pursuing this role with a lot of nuance, subtlety, and style.

The protagonist in Jai Bhim is “Justice” itself and the director, Tha Se Gnanavel and the lead actor, Suriya throughout the films share with us the trials and tribulations of seeking justice.

Jai Bhim is a film that epitomizes the evolution of Indian democracy and its continuing struggles to ensure equality, non-discrimination, protection of human rights, adherence to the rule of law, accountability of power holders, and most importantly, the challenges of seeking justice to the poor, marginalized and vulnerable victims. The film has persuasively dealt with three substantive issues that affect Indian democracy as we celebrate 75 years of democratic governance in India.

One of the most difficult issues to be discussed in India in any forum is the challenge of caste. It is all-pervasive, omni-present and yet everybody is uncomfortable to talk about its institutionalized, discriminatory, and brutal impact on the society at large. Jai Bhim is a bold movie written, directed, and acted with courage of conviction that brings the issue of caste front and centre to the narrative, dialogue, and design of the film. It is powerful and yet subtle in terms of showcasing the deeply embedded caste-based discrimination in our society and how it has acquired the status of a Frankenstein’s monster. Jai Bhim has persuasively shown us that we have a long way to go in fulfilling Dr. B.R. Ambedkar’s vision and the promise that we made in the Constitution of India: “Article 17. Abolition of Untouchability: Untouchability is abolished and its practice in any form is forbidden. The enforcement of any disability arising out of Untouchability shall be an offence punishable in accordance with law.”

Jai Bhim is a movie that touches every nerve of human conscience. It challenges our fundamental assumptions of Indian democracy and the promise to establish a society based on the rule of law. It is a fact that wide-spread torture happens in custodial institutions in India. In an official reply to a question in Lok Sabha, the Ministry of Home Affairs, Government of India said that as many as 348 people died and 1,189 were tortured in police custody in 2018-19 and 2020-21. This data will be significantly more in reality as not all instances of torture and custodial violence gets reported. But even this data should shock our conscience. The brutality that was meted out to the three individuals who were illegally taken into custody by the police in the film does demonstrate the larger problem of policing in India. But it has also demonstrated the wide gap between the rhetoric of law and its reality. There are numerous judgments of the Supreme Court of India, which were violated in letter and spirit in relation to the arrest, detention, interrogation, investigation, and all related processes of the characters in the film. Jai Bhim, as a film went beyond the contours of creative imagination and brought us close to the ugly realities of the internal workings of the criminal justice system. It neither hesitated to show the dysfunctional nature of the criminal justice process nor did it exaggerate the systemic weaknesses and failures. It is the genius of the film directing and acting that the story struck a perfect balance and left the audience deeply shaken and moved and yet reflecting and hoping for seeking that elusive justice.

Role and Responsibility of Police, Lawyers and Judges

Jai Bhim, while keeping a tight narrative of the protagonist, “Justice” itself on trial was constantly struggling to keep hope alive but was sincere in showing the brutal realties of policing. Every actor of the criminal justice system, right from the constable, sub-inspector, Inspector of Police and all the way to the highest echelons of police had demonstrated impunity, indifference, and irresponsibility to the need for protecting rights and providing justice to the victim.

Democracy is based upon the faith that ordinary people have in its institutions. Law, police, and judiciary are institutions that bind our democratic vision and instill this trust among the ordinary people. Jai Bhim ensured that the faith and trust that people ought to have in democratic institutions is not broken – be it the IG of Police who wrote an independent report on the death in custody of Rajakannu or for that that matter the distinguished judges of the judiciary who were not persuaded by the Advocate General’s argument but was ready to give a long rope to listen to the public interest lawyer, Chandru’s arguments. These are significant acts of courage, hope and justice that will protect the faith that ordinary people have in the functioning of our democratic institutions. Whether it is Rajakannus of India or George Floyds of the world, we need to believe in the words of Dr. Martin Luther King, Jr when he observed, “The arc of the moral universe is long, but it bends towards justice.”

Jai Bhim is a classic among the genre of movies in India. It ought to be selected as India’s entry for the Oscars. The film has captured the public imagination in more ways than many would have thought and hopefully, has persuaded people in power to generate reform ideas that can change lives. Jai Bhim also recognized the important role of lawyers and judges in upholding justice as the institutions of justice are the last bastion of hope between victims of crime and abuse of power believing in the rule of law to seek justice as opposed to resorting to violence and challenging our institutions while undermining the existing legal and constitutional order.

Jai Bhim, I believe should be watched by every law student, lawyer, police officer, judge, MLA, MP, and people who exercise public powers, besides other members of the society at large as the movie awakens the human conscience and the inherent sense of justice that is deeply embedded in humanity. The protagonist of the movie, “Justice”, at last wins the struggle, but these struggles to seek justice will have to continue. Jai Bhim has done justice to what one of India’s greatest film makers, Satyajit Ray, had observed: “…Somehow I feel that an ordinary person–the man in the street if you like – is a more challenging subject for exploration than people in the heroic mold. It is the half shades, the hardly audible notes that I want to capture and explore.”